Up for grabs is yet another NSR 250 and it was submitted to us by it’s proud owner- Rob.

Rob’s NSR is tricked out with some nice TYGA upgrades such as pipes and dashboard. Although, I’m usually not a huge fan of aftermarket paint jobs and add-ons, I’m really starting to warm up to the idea when it comes to 2-strokes. I can only imagine pulling up to the meeting spot for a Sunday ride or a bike night on a 2 stroke; especially in my neck of the woods. And lets not forget the wonderful musical sound of a dry clutch 🙂 What makes this bike special is how exotic it it. It has Single-sided swingarm (aka Pro-Arm), Dry Clutch (with carbon fiber cover) and very unique “credit card” programmable ignition switch.

As you can expect from any 14 year old bike there are a few dings and a repair or two to speak of.

Bike has small dent in tank, but I even know where to get a stock painted matching factory replacement tank. This tank is coated inside though, carbs fully cleaned and petcock and air filter replaced. Be sure and check out the photo showing the superb welding on the TYGA expansion chambers. There could be a picture of these in Websters for the explanation of “Perfect”

Good luck with the sale Rob!

This was the Bike of the Year for 1987 and this bike is, supposedly, in mint condition with only 6k miles.  The seller states that this bike has new Bridgestone’s.  At $2,800; I call this a great price if the condition is accurate.  You’d be unlikely to find a decent example for less than $2,500 let alone a mint, 6k mile, one.  Give this seller a call!  See the bike on Craigslist here. 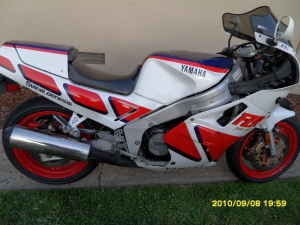 Check it out on Orange County Craigslist.

Not too much information about this one, but it looks really nice in the CL photos. These seem to be popping up on a regular basis nowadays and I for one am not complaining. Of course it’s for purely selfish reasons like I want one so bad, but don’t have 8g’s lying around to buy one. Anyone want to trade their NSR for my FZR 400?? Bueller, Bueller, Bueller……. I didn’t think so, but you can’t get what you don’t ask for right? 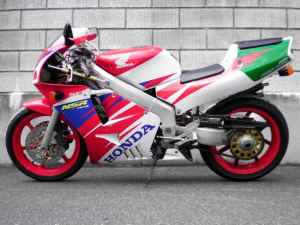 My buddy Joe, who is a good friend of RSBFS, has told me that the JHA pipes on this bike are a rare piece by themselves. He also tells me that although SS expansion chambers may look good the stock mild steel ones perform better. My ignorant response to him? They look good and fast so they must be just that 😉

Hopefully, we’ll continue to see a steady flow of nice NSR’s and maybe, just maybe I’ll find one in my range. But, if you are currently in the market for one of these baby’s you can click here for contact info Since I’m a huge fan of both Kawasaki and 400cc motorcycles this one really does it for me. The pictures don’t do much for it, but is typical for a CL post and should be expected. But, if you have an interest in a bike like this, you owe it to yourself to check it out. Because the opportunity to pick one of these up doesn’t come around very often. These have roughly 60hp, came equipped with USD forks, a 6 speed transmission and generally rank higher on the “Trick” scale when compared to a 90 FZR400. If I could have my druthers I’d pick the ZXR400 over my beloved FZR, but since the ZXR’s weren’t offered state side we were never afforded the choice. I think I can count on one hand how many of these we have seen on RSBFS and a few of those were across the pond.

From the CL listing:

Up for sale is a rare kawasaki zxr-400, this is is 1990 H2 model with red/black/ silver paint. You will not see this one around very often. This bike has a clean title, and california registration. The current registration is paid up till next year.

Background about this bike:

The current mileage is 47,xxxx km or 29,xxxx miles, I am the third owner of this bike and have barely ridden it since i owned it. Because of the rareness of this bike I have been riding it less than ten times a year. The carburetors have been serviced and runs really well. Under my ownership, the bike has not been down, but the first owner has had low speed downs once on each side and everything has been repaired. The second owner never rode it and kept it in the living room as a trophy bike.

You can view the CL add here

Ducati 851 and 888 listings have been scarce since the good weather has arrived. Here’s one that came up last night on Craigslist: Not quite museum quality but very nice. New front and rear tires, belts and valves last done at 9200 miles.

9895 miles, kept in climate controlled garage, only ridden on perfect weather days and runs under 50 miles

This is a very nice looking 996R with less than 1k miles in California!

This 996R looks to be completely stock as a bike with under 1k miles should be!  500 of these were made for 2000 and, as the seller states, came equipped with Ohlins suspension front & rear, Marchesini wheels, carbon bits galore, Brembo’s, and a trick Testastretta motor among other things.

We’ve seen these 996R’s and SPS’s go for varying amounts but, this one seems reasonably priced with less than 1k miles and an asking price of $14,500–See our other 996 content here.  If you’d rather have a real homologation/race replica bike over a stickered up, brand-new, R1; have a look at this 996R on Craigslist here. 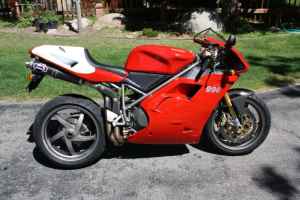 This is another 996R but this one is being sold as-new with only two miles on the odometer!

This bike is being sold as new with even the shipping covers and stickers remaining on the headlights and turn signals and license plate mount uninstalled.  The seller states that this bike has never been started–other than when it was at the factory–and has always been stored in a climate controlled office/home.  The bike was purchased through BCM Motorsports and includes uninstalled 102db Termignoni silencers but does not mention other items included with the bike when new–I’d expect they’re included but ask the seller.  The asking price of $22,000 doesn’t seem completely outrageous given what you’re buying (The self control of the seller).  If you missed out on these 996R’s in 2001 or foolishly rode the one you did get, have a look at this one on Ducati.ms here.