This is a special CBR900RR created to commemorate Honda’s 100th victory at the Isle of Man TT.  Located in Stowmarket, Suffolk, England is a 1998 Honda TT100 FireBlade Evolution with only twenty miles.  These were created by Mick Grant and Russell Savory to commemorate Honda’s wins at the TT; these bikes were distributed through Honda dealers as a special order item only.  This example is number 22 of 23 produced.  The bike features special bodywork, Ohlins 43mm USD forks, Ohlins rear shock, Brembo four piston calipers up front, Dymag alloy wheels, Stack electronic dash, a single sided swing arm and the engine mods are:

Engine wise the crankcases were modified, pistons con rods and crankshaft were all balanced the cylinder head was ported and gas flowed, RS Performance high lift cams and springs were also fitted but kept the standard valves, also the standard 11.1:1 compression ratio was retained, the gearbox was changed to an HRC based close ratio unit, with speed shifter, the ignition system was changed to help the bike rev to a higher 12,200 rpm, along with Keihin 41mm FCR flat-slide carb’s, exhaust was a custom designed titanium 4-1 with a choice of either road legal or race silencer producing a rear wheel figure of 150+bhp.

This bike is a lot more than just a pretty paint job.  It’s looks may be somewhat dated but I’d say this is a very good looking CBR that I would be proud to own–sadly they weren’t sold in the U.S.  The parts to convert your stock CBR into an Evolution can also be purchased here–the prices appear to be off…read: low.  This bike is very cool and is what Honda should have made the 900 into at some point in it’s production run.  Look to see a Supermono from this dealer in the near future.  See this bike at MadeInItalyMotorcycles.com here. 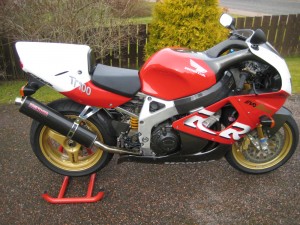 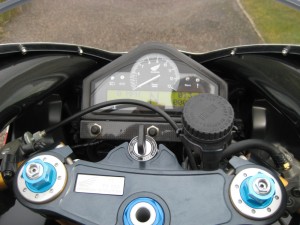 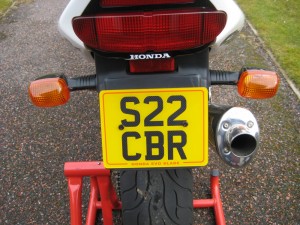