This NSR250 has to have one of the coolest replica paint schemes we’ve seen!  Located in Saint Petersburg, Florida is a 1992 Honda NSR250 finished as a replica Foggy-Petronas FP1.  While gentlemen prefer 100% original paint work, if you have a bike that isn’t perfect cosmetically, creativity will always win out over a can of Krylon™ flat-black. This bike does have a crazy amount of miles–for a U.S. NSR–at 19,421mi but, it does feature a rebuilt motor.  It is also titled and registered for street use and features Tyga exhaust and “electronics” (I’m guessing their power-up kit).  Some view the MC21 as the most usable NSR as they weren’t plagued by the electronics of the later generation.  Now, what makes this bike cool?  Well, if you didn’t know, Carl Fogarty joined up with Malaysian oil giant Petronas to create a bike to compete in World SuperBike.  The resultant bike was a tripple that did quite poorly in WSB but, still needed to be Homologated for WSB use.  As it happens, the FP1 was such a failure that Petronas decided to simply cut their losses and shelve all existence of the bike with supposedly only two street versions actually being sold.  That is all well and good but, what does that have to do with this bike.  Well, when most vehicles are turned into replica’s, it’s usually of the crap variety complete with eBay Ferrari stickers in abundance; This bike however has nothing, really, in common with what the replica is based on but, it is still very cool because no one will know what it is a replica of, and if they do, they’ll be someone you’ll actually want to chat with and not someone who’s uncles-friend-knows-a-guy who owns a Ferrari.  This bike is actually a pretty good Troy Corser replica too:  The stickers appear to be a little too small but they’re still the right ones and in the right places.  I must clarify:  I usually hate replicas with a passion but this one is obscure enough that no one will even know it’s a replica because they don’t know what Petronas or a NSR is anyway.  The asking price is $6,500 which I would imagine to be a bit high but we’ve seen MC21’s all over the spectrum.  Here is some interesting recent information on the FP1.  Some quick, general, information about the FP1 can be found on Wikipedia here.  See the Craigslist post for the NSR here. 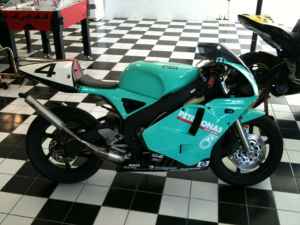 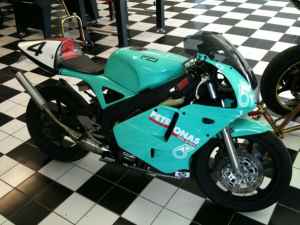 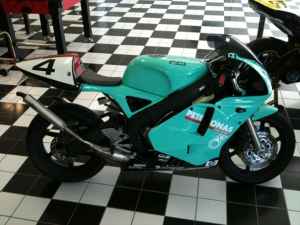 Here is a photo of an actual FP1 from it’s release.