Let me start off by saying that, I wish I wasn’t posting this, I wish I was driving down to buy this!  Located in Oakland, California is a Suzuki RGV250 SP with 9,057km (5,627mi) and an asking price of $4,200 OBO!  The bike does need the clutch replaced and hasn’t run in a few years.  Regardless, this appears to be a Sports Production model with a dry clutch and close-ratio gear box.  The other features of the VJ22 are:

For the 1991 year’s model the RGV250 Gamma was updated with new carburetors (from 32 mm to 34 mm), power valves and new front suspension.  A new semi-frame banana swingarm was introduced (looks a lot like the one used in the Honda NSR).  It gave better ground clearance and allowed to draw the exhaust pipes where the swingarm should have been…The new swingarm stiffened the rear and quite dramatically but also increased the weight from 129kg to 139kg.  With a new rear swingarm the front end was also rebuilt with the new upside down suspension forks, which had a good design but the performance was not as good as the old forks which it replaced.  The power output and torque was increased slightly and a 17″ rear wheel added to the list of upgrades.

With the introduction of the power valves came the biggest problem of the RGV250.  The valves wear down from opening and closing and can collide with the piston and break.

The bike does come with a new clutch to replace the old one, there is a small dent in the tank, some decal fading and a small crack in the right mirror.  This bike isn’t perfect mechanically, but if you can do the work yourself you’ll have an amazing Homologation bike that that is very easily worth much more than you paid for it.  From the looking at the photos, this bike also appears to be 100% stock without any modifications.  Am I the only one that sees how awesome this bike is, especially at this price?  I”m up for a 306lb, 63hp two stroke any day!  If this puts you in the mood, see it on BayAreaRidersForum here. 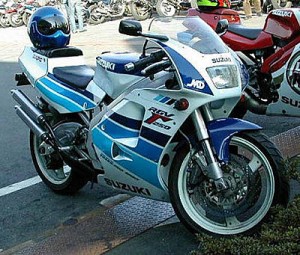 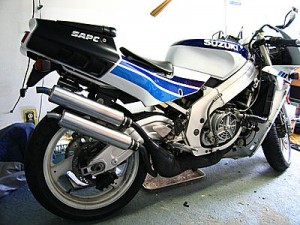 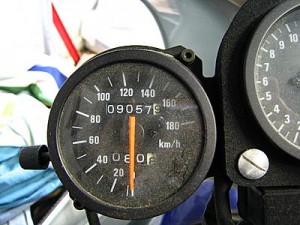 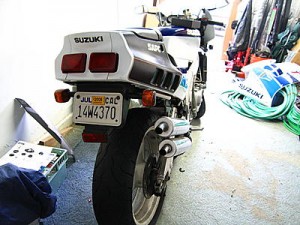