This is a close to showroom new ’06 R1 LE!  Located in Tucson, Arizona is a 2006 Yamaha YZF-R1 Limited Edition with 815 original miles.  This bike has had a full inspection and was declared to be in perfect mechanical and cosmetic condition.  Now, Yamaha released the 50th anniversary R1’s at the same time as these Limited’s were released which can cause an initial doubt as they are two very different bikes but the plastics are almost exactly the same.  The Limited Edition features Ohlins fully adjustable suspension front & rear, ride height adjustment, Marchesini wheels, slipper clutch and the uprated power of the standard 2006 model.  The LE was produced to homologate the R1 for WSB competition and actually came in a Gun Smoke for markets other than N.A with only 500 total being produced.  To understand the visual differences between the LE and 50th, you must look to the front suspension which has silver stanchions for the LE and black for the 50th; the most obvious visual change is the addition of the gold, multi-spoke, Marchesini wheels fitted to the LE.  The 50th is fitted with standard black wheels.  If you’re buying, the two have very different prices also:  The LE is, currently, hovering above $10k, in the 11-12.5k range while the 50th is down to the 5-7k depending on miles and accessories.  We posted a LE that was still in the crate that had an asking price of $12,995 which can be seen here.  While at a dealer, this current example has an asking price of $11,995 making each of those miles it has accumulated cost just over a dollar with exclusion of maintenance costs.  While it may be more beneficial for the owner of the 5oth to have the same paint scheme, if you own a LE you know that you’ve got something very special and that is all that matters.  If you’d like a modern day homologation Yamaha, see this bike on Craigslist here–and yes, this is more special than the 2010 Rossi replica. 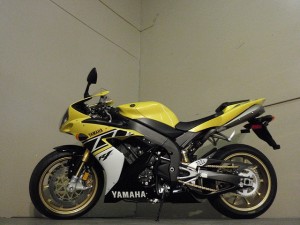 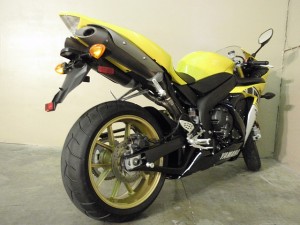 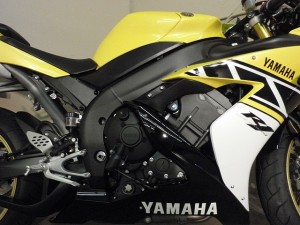 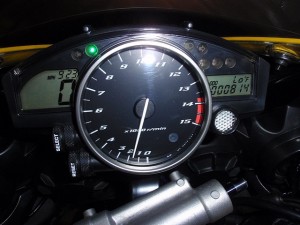