This is a 916SPS fitted with a FBF 1026 stroker kit!  Located in Stillwater, Oklahoma is a Ducati 916SPS that has been fitted with the Fast By Ferracci 1026 kit.  The seller makes no mention of a year or mileage (other than that it is low) but, I’m going to assume it is an early SPS because of what look to be Showa front forks.  If this bike is built to the same spec as the FBF display bikes it has:

The bike is also fitted with early Dymag carbon five-spoke wheels.  I’m going to go out on a limb and say that it doesn’t have the FBF carbon bodywork and tank judging by the original looking bodywork but, I could be wrong, this is all speculation.  The full kit probably, originally, ran the seller just under $10k and resulted in just under 150hp.  These 916SPS bikes appear to have stopped depreciating and, I’ll bet, this seller is probably looking for a lot more than a stock SPS.  See the previous 916SPS’ we’ve posted here.  See the Craigslist post here. 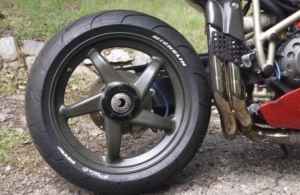