Yes, this baby will sell no matter what the price! That my friends is something to get excited about. These were originally released only in Japan and have graced the pages of RSBFS one or two other times. Although this one does have a few issues like ‘it’s been sitting for a number of years’ and has what is described as a ‘drop when moving’ it is still an extremely rare Suzuki in the states. These Japanese models have that racer boy look and feel with the red number plate on the solo tail section. As I reported in my previous GSXR 750RR post some of the differences between the US standard issue GSXR and the Japanese one include, but aren’t limited to, 40mm Slingshot Carbs, close ratio gear box, single seat and an aluminum gas tank. In 1989 the spec sheets said these made about 120hp and weighed in at 411#’s dry weight. In 1989 that was a ton of power for a 750.

Here’s the bike that I’m blabbering about: 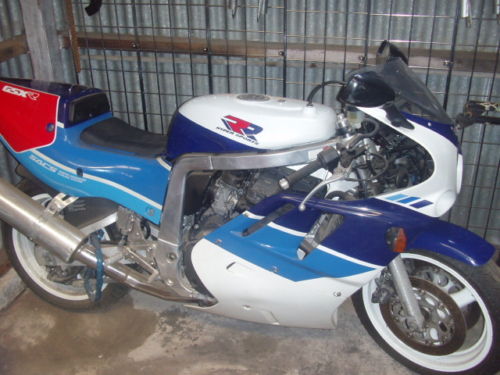 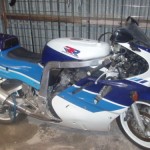 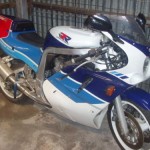 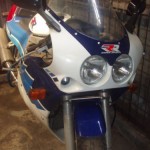 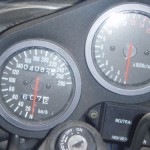 Here you have a Suzuki GSX RR 750 Hypersport

This is the race built production bike built by Suzuki.

Never released in the USA

Amazing bike to own.

Has only done 4803 kilometres in its lifetime.

Has a few scratches and marks attributed with age

The bike was previously ridden by a collector in the family. The bike has been dropped on the left and has some scrapes on the belly side. Other than this the most info I have been able to discover is the original owner dropped the bike when moving it. It has apparently had no accidents other than this.

Bike was running and then has been stored for the past 15 years.

The bike is a bit dusty and the metal could use a polish, due to the time in storage. The bike was well cared for. The bike would need a major service as it has been sitting for around 15 years without being turned over. I have put it in gear and moved the bike to check compression, and it rolls with no problems. Hope this helps

The original owner is gone so I cannot find out much detailed info.

Okay, so as previously mentioned the bike has been sitting for quite some time and it has been dropped. As Dan (from the east coast) pointed out to me the seller conveniently didn’t show a photo of the damaged side. Also, in the head on photo you can see the forks are oxidized pretty bad and you can see just how dirty the bike is from being stored. Taking all of that into consideration the price is still way cheap in my opinion. So cheap in fact at the time of writing this post I am the current high bidder 🙂 (My wife is going to kill me when she finds out) I did send a message, through ebay, to the seller asking them for a picture of the left side. If I get one or one is added to the auction I’ll update the post for everyone that is following this post.

to view this Japanese Spec RR