What a pretty bike!  Is it an original tri color produced by the factory?  Well probably not but someone sure had the right idea.  I rarely see bikes that have been repainted that look spot on.  This one does.  Maybe it is just easy to make anything look good in green, red and white.  Quality wise, it is hard to judge the paint by photos.   Moving on from the paint, you have a standard 750s with roughly 9,800 miles on it.  It is also graced with Arrow carbon fiber mufflers.  I don’t know if it is a full Arrow exhaust or just the mufflers.  There is just something about the lines of the Laverda that just scream sport bike:  it just looks right.  The twin headlights, twin exhaust, stout looking frame, air scoops at the front:  ok, enough of me trying to convince my self to bid.

I am selling my 1998 Laverda 750S.  You won’t pull up next to another of these rare Italian beauties! Tri-color paint scheme is in good condition.  It runs strong, just had the throttle position sensor replaced as well as a new crank sensor.  Odometer reads in KM so it works out to 9750 Miles This is a fast, flick able sport bike with all top shelf components…Brembo Brakes, Paioli forks and shocks, Arrow carbon fiber exhaust. Loves to be rev’d…This thing comes alive at 7000rpm.  Runs great, looks awesome.  There are some dings here and there in the paint but over all it is very clean!  I have to many bikes and sport bikes are not my style any more (46 years old now…a little slower and prefer to stretch out a bit) so this one has to go. 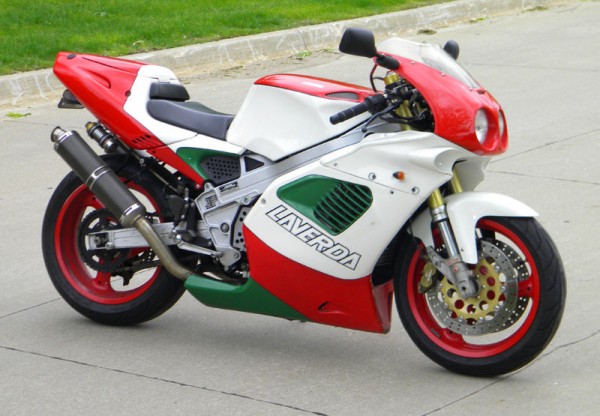 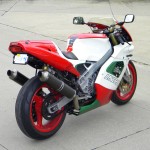 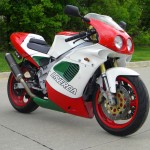 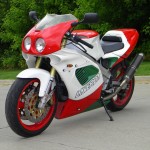 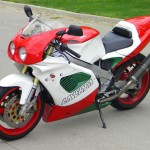 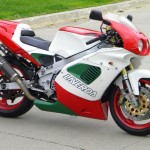 Maybe the seller is on to something when he wrote, “Why ride a Ducati….be different.”  You won’t pass many of these on the street and you will sure stick out with that paint scheme.  It looks like the other benefit may be that you can own an Italian sport bike with quality components and not part with a lot of your savings, say compared to a Ducati or MV Agusta.  Bidding is active on the bike and is hovering around $3,500 as of this writing.  .  Do we have any readers that own a 750s?  I’d love to read some comments about them.

I was hoping to find a clip with some sound of the Laverda engine. No luck on that but I did find this video review of the bike.  It is in Italian but gives some good close ups of the bike:

There are quite a few 2-stroke fans on RSBFS and although I am not too familiar with these machines, I do have an appreciation for them. The parallel-engined Suzuki RG250 is quite special in that it was the first mass-produced motorcycle with an aluminum frame and aerodynamic fairing. 1987 was the last production year for the RG250, later replaced by the RGV250 with a V twin. To learn more about the RG250, click HERE. 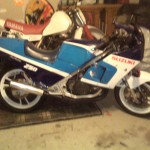 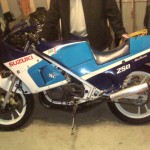 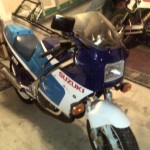 With 49 hp (this is the Canadian version) on tap, the RG250 won’t win any drag races, but with only 287 lbs (dry) to push around, the weight to horsepower ratio ain’t too shabby even by modern standards and should make one serious fun machine.

Although I didn’t grow up around these smoke machines, 2-strokes remind me of the era when life was a bit more simple and racing was about pure rider talent and cojones – the likes of King Kenny, Barry Sheene, Mick Grant, and Agostini (I may have missed a few, but please spare me).

In any case, this sounds like a Suzuki that I wouldn’t mind having a go on!

Ah yes, another sexy Italian motorcycle for sale. You have to give it to the Italians for having the ability to consistently build great looking motorcycles year after year. And the cool thing is that it doesn’t matter what manufacturer it is, they all seem to have a keen eye for styling and Laverda was right there with the best of them (read: MV). If my memory serves me correctly Laverda was purchased by Aprilia which in turn is now owned by Piaggio. None of which amounts to much other than Laverda was eventually phased out sometime in 2004/2005 and is now for sale, again.

If you take a peek at the photos you may notice Laverda’s different way of thinking when building motorcycles. Laverda’s chain drive is on the right side of the bike and the brake rotor on the left side. Another point of interest is that while practically every other Italian motorcycle company was building some type of opposing twin cylinder engine, Laverda opted for the parallel twin. I’m not aware of any other company that built parallel twins that matched Laverda’s cc’s. Kawasaki makes the Ninja 500 in a parallel twin and that’s as big as I’m aware of in recent sport bike history.

I liked these when they were introduced and I still like the Laverda design. I’m especially fond of the orange Marchesini wheels. Asking price is $6,900.00 and is located on the Charlotte Craigslist should you be interested. 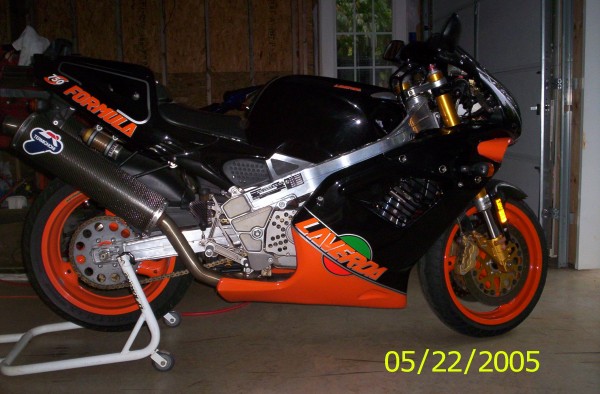 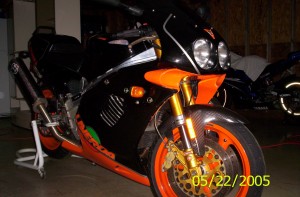 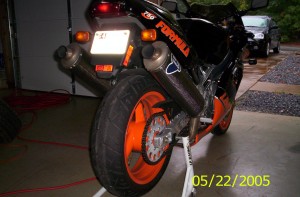 I’ve added a video of a Laverda parallel twin so you can hear how they sound if you aren’t familiar with them.

I like the sound of parallel twins when they are of a larger variety as I think they have a deep throaty sound, but when they get too small they sound like a scooter.