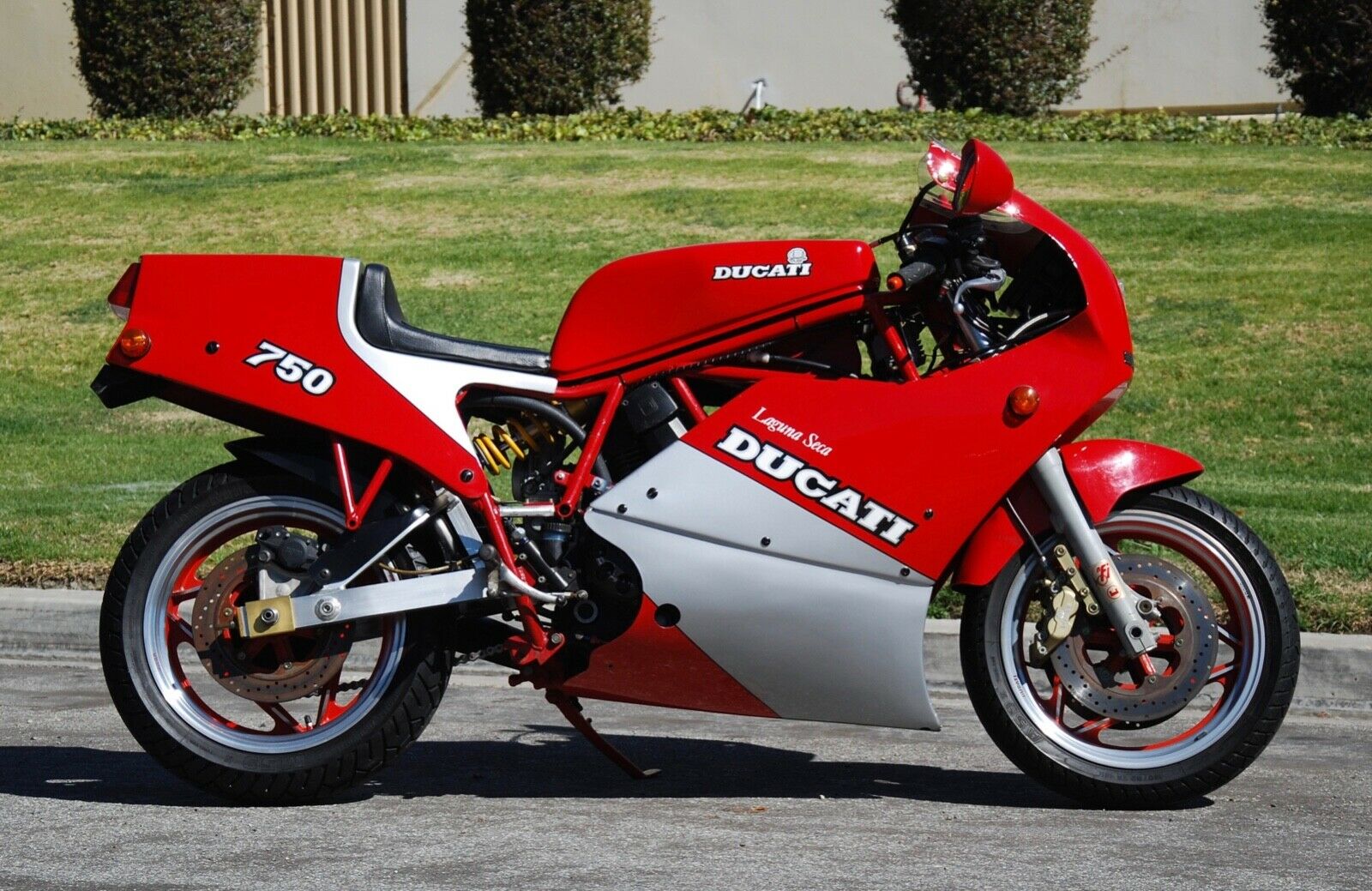 Behold the mighty Ducati F1 special edition “Laguna Seca.” Essentially a factory hot rod based on the F1 (a 750cc version of the Tourist Trophy), the Laguna Seca shared a special tier with the two other limited edition models, the Santamonica and the Montjuich. All of the special models were named after race tracks where a Ducati rider pulled a first place rabbit out of a hat. In this case, it was Marco “Lucky” Lucchinelli prevailing at the 1986 Battle of the Twins (BOTT) event at the famed California track. The Laguna Seca was closest to the Montjuich in spec, the differences being largely related to the intended target audience: North America. As such, changes were basically limited to emissions and noise controls. The rest is pure 1980s Ducati goodness; rough and ready, light and lean. The seller has written (or copied?) a good story of the Laguna Seca (and the F1 model in general), so I will let him pick up the tale: Less than 300 examples made

Considered by many enthusiasts to be the last of the ‘real’ Ducatis, the race-styled 750 F1 first appeared in 1985. Ducati had already enjoyed considerable success with its Pantah-derived F2 racers in FIM Formula 2 racing – Tony Rutter winning the championship four-times running between 1981 and 1984 – so a ‘750’ version was the logical next step.

First seen in prototype form in endurance races in 1983, the F1’s 748cc engine was the latest in a long line of stretches applied to the original 500c ‘belt drive’ Desmo unit that had first appeared in the Pantah in 1979 – a street-legal updated version of the mid-’80s TT1. A markedly over-square design of 88×61.5mm bore/stroke, the F1 engine produced around 60bhp and functioned as a stressed element within the frame, the swinging arm pivoting in the rear of the gearbox. Clearly visible above the deliberately cut away fairing sides, the aforementioned frame attracted almost as much attention as the engine: a trellis of short, straight tubes, it has formed the basis of every road-going Ducati since, as well as the first Desmosedici Moto GP racers. In the fashion of the day, the F1 came with a 16-inch front wheel, while braking power was provided by state-of-the-art triple Brembos. The stock F1 was complemented by a series of hand-built, limited edition, race replicas – Montjuich, Santamonica and Laguna Seca – the last inspired by Marco “Lucky” Lucchinelli’s famous ‘Battle of the Twins’ race victory at Daytona in 1986. Today the evocatively named F1 and its derivatives are highly prized by Ducati collectors.

There were some small changes between the two bikes, namely in the Laguna’s parts from the new Paso. The delta-spoked one-piece 16-inch Oscam wheels and the brake discs, but not the four-piston ‘racing’ Brembo front calipers, came from the 750 Paso, as did the wider front fender. Other changes included a ‘Lucky’ signature steel gas tank, revised foot peg bracketry and a plastic rear sub-fender attached to the swing arm. Most Laguna Secas came with a solo seat and were built in limited numbers (perhaps as few as 296.) 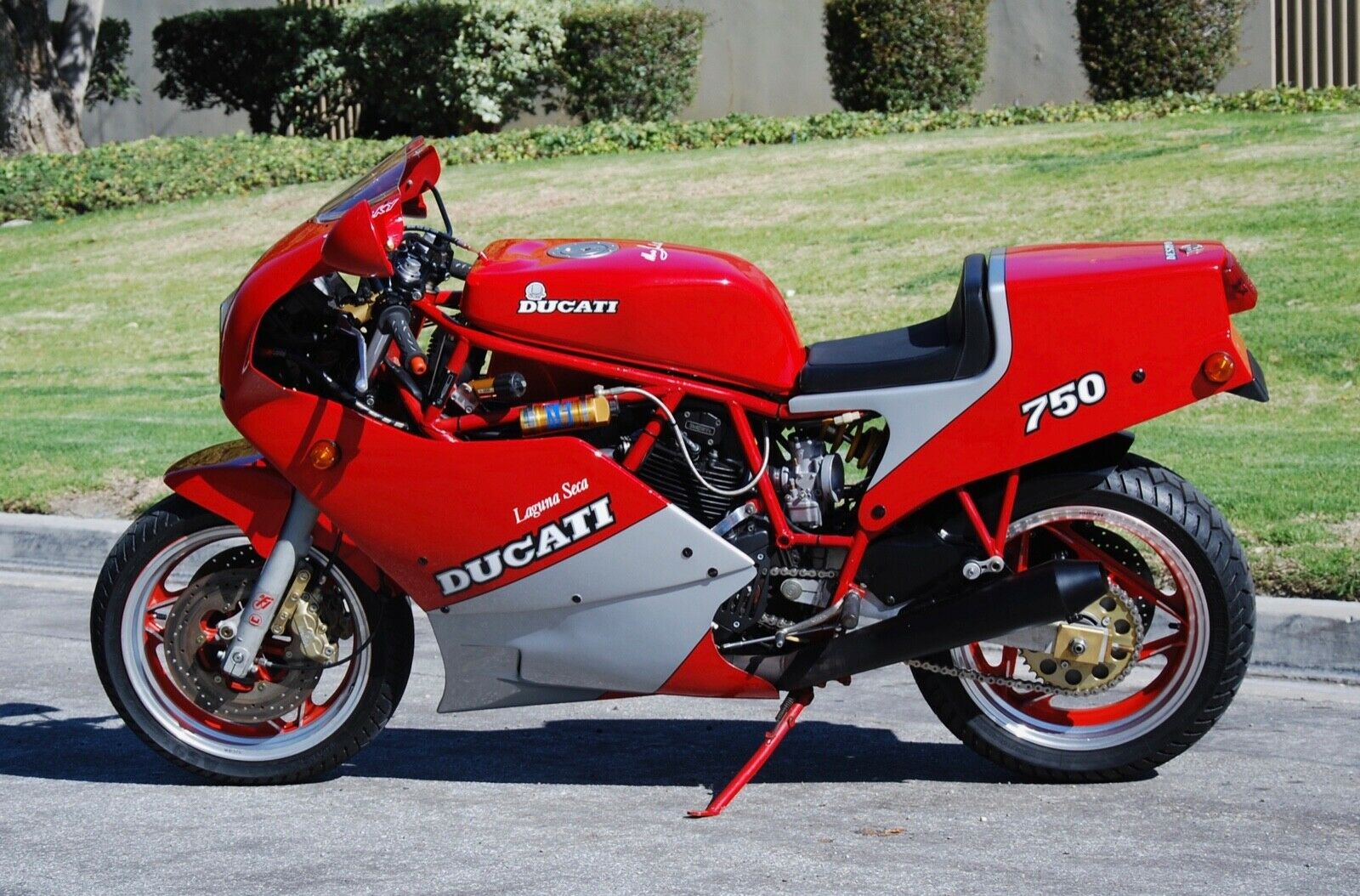 Not a lot of history about this particular example, although the read is a good one (reminds me of Ian Faloon). The only point of note I see on this bike is the non-standard Ohlins external shock reservoir strapped to the left side of the iconic trestle frame chassis (original shock was a Marzocchi PVS 4). Any other changes are unknown with the facts given, and with only 3 pictures to work with there are many questions left unanswered. But with only 6,500 miles, this beauty is undoubtedly clean and very rare. I’m not sure if proper etiquette deems we refer to this as the WeatherTech Raceway Laguna Seca, nee Mazda Raceway Laguna Seca, nee Laguna Seca Raceway, but the connection is very clear. Also clear is the asking price: a not insignificant $24,900. That is a bit higher than we usually see these bikes offered – although the seller appears open to a lesser figure – so if you’re in the market for one of these beautiful and rare model Pantahs you should act quickly. Check it out here, and then jump back to the comments and share your thoughts on the F1 model Ducatis: are you a fan? Good Luck!!