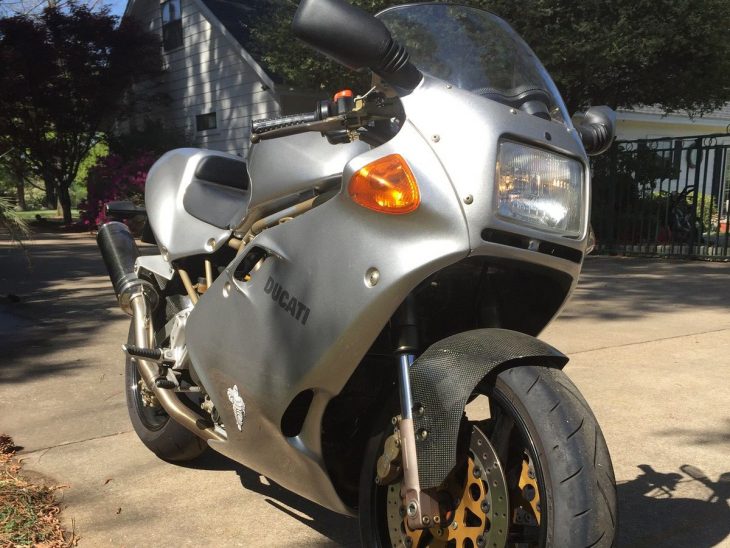 This is it. The end of the line. The last hurrah. The final countdown. The Ducati 900SS FE or “Final Edition.” Well, not really: 1999 saw the introduction of a brand new-ish, fuel-injected, Pierre Terblanche-styled SuperSport that carried over most of this bike’s strengths. But this is the very last of the old-school, carbureted SuperSports that carried Ducati through the Cagiva era and into the present: following a bit of a gap left after the Terblanche machine, Ducati is back with the introduction of a very Panigalesque SuperSport for for folks who want Ducati style and handling without the terrifying top-end power and chiropractor bills. 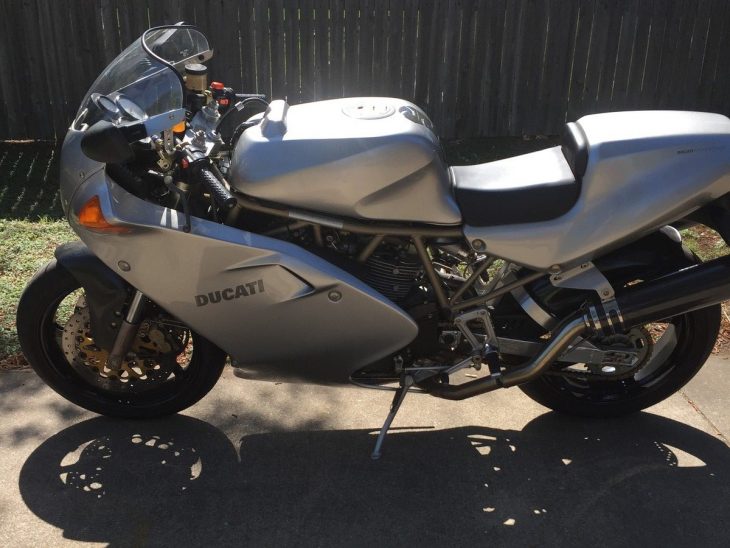 With slab-sided styling reminiscent of Ducati’s earlier 851/888, the SS FE evoked an era of less frantic performance: Ducati couldn’t hope to compete with the Japanese Big Four’s never-ending cycle of restyles and cryptic performance acronyms, so they didn’t bother. This is the sportbike distilled, with power accessible to mere mortals and superior handling. Built around Ducati’s famous trellis frame and powered by their two-valve, air-cooled L-twin engine, the Final Edition was basically a 900SS/SP with silver paint and a solo tail, along with some carbon-fiber and other lightweight bits. While most modern sportbikes discourage actual passengers by limiting accommodations to a tiny cushion and a set of pegs designed more as tie-down mounts, older sportbikes that might otherwise make decent bikes for ferrying significant others simply got rid of the seat entirely to convey Maximum Sportiness. The solo tail and deleted passenger pegs on the Final Edition also allowed the use of a high-mount exhaust that provided additional cornering clearance for spirited riding or track days. 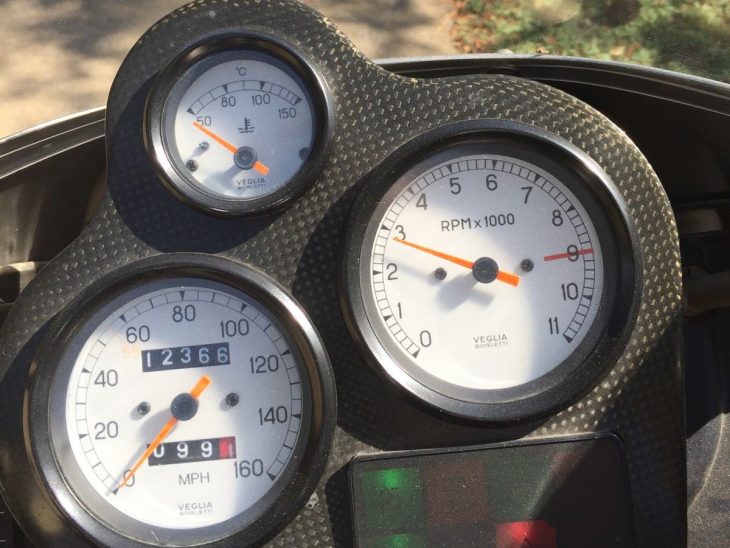 Straight-line performance was never this bike’s strong suit: with a claimed 84hp pushing the bike’s 424lb wet weight, an SS would get positively murdered by any Japanese inline four of the period. But the Ducati had charisma to spare, handling, comfort, and that glorious v-twin sound that only gets better with a set of carbon-fiber exhausts. Or, if you’re on a budget, you can simply drill out the rivets on the standard exhaust, remove the stock guts, and presto: booming Ducati noise for the cost of a few screws! Luckily, this particular example comes with a quality set of carbon mufflers included so, unless you’re a Termignoni snob, there’s not much to add. 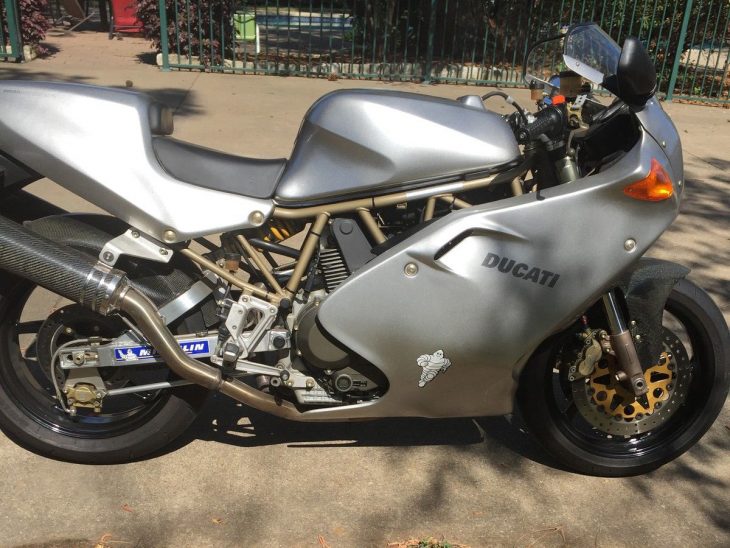 Ducati 900 Supersport Final Edition, this bike has covered 12366 miles, fresh service at AMS Ducati Dallas which included oil change Motul 300V, fuel filter, hydraulics flushed, etc. Bike is in excellent cond with a small crack under the Michellin Man decal on the right hand lower fairing. Bridgestone tires have 1000 miles on them, upgraded clutch slave cylinder from Yoyodyne, Ducati Performance carbon mufflers, carbon tank protector. The 900 FE is limited edition and this bike is #193 of 300 bikes imported to USA in 1998. The carbon fibre fenders and clutch cover are all standard 900 FE parts. This was the last Supersport to have Mikuni carbs which have been re-jetted and matched to a K&N air filter. Bike makes 76 rear wheel horsepower on the AMS dyno. Selling bike to reduce collection. Spare key and owner’s manual and toolkit included. Crating service available. 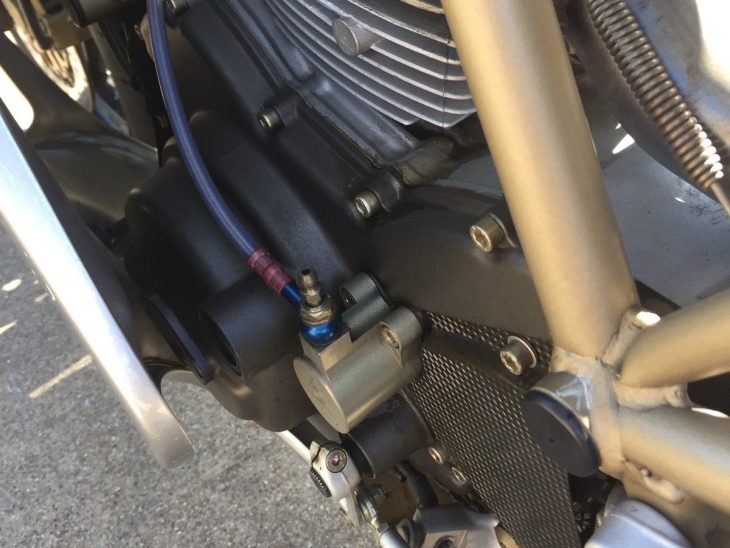 This bike’s dyno’d 76hp is pretty much bang-on for a carbureted two-valve Ducati at the rear wheel and, unless you want to splurge on a set of 944cc pistons and some Keihin flat-slide carburetors, you’re better off just enjoying the package, rather than chasing horsepower numbers that will still get creamed by anything remotely modern. The photos in the listing aren’t the greatest, considering that the bike’s silver color hides imperfections and dirt pretty well, although it’s pretty obvious that some of the carbon is a bit faded, but that’s nearly unavoidable at this point. The FE is a bit of a top-shelf parts-bin-special, but that’s not necessarily a bad thing and these are very rare motorcycles, if collectibility is your bag. I personally prefer the half-faired model in scar-your-retinas yellow, but this FE is undoubtedly the classy choice. 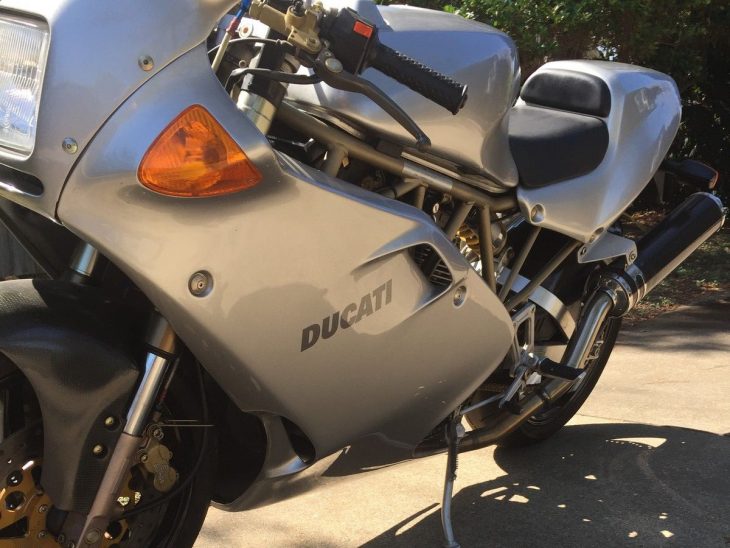