The Yamaha R1’s likeable cousin, the FZ-1 was known as the Fazer offshore.  With its smaller carbs stretching the torque curve, more compliant suspension, and accomodating riding position, the FZ-1 was a bit of a sleeper with 143 hp.  Some of that friendliness has been dyno-tuned out of this example from Michigan, with airbox delete, exhaust and re-jetted carburettors. 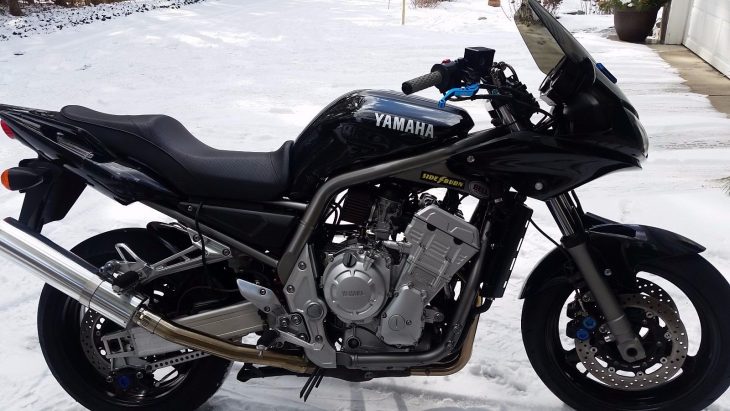 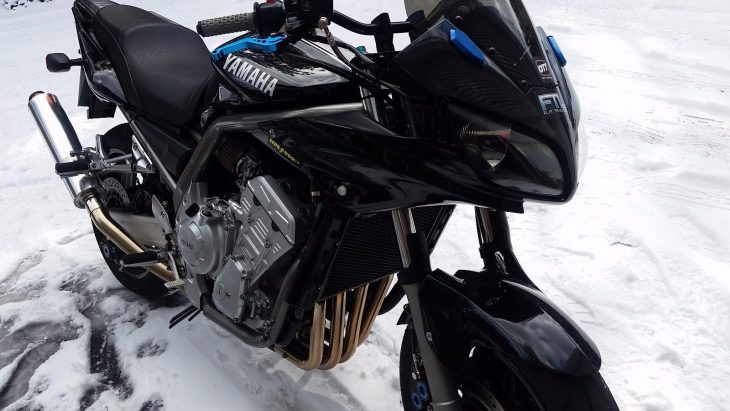 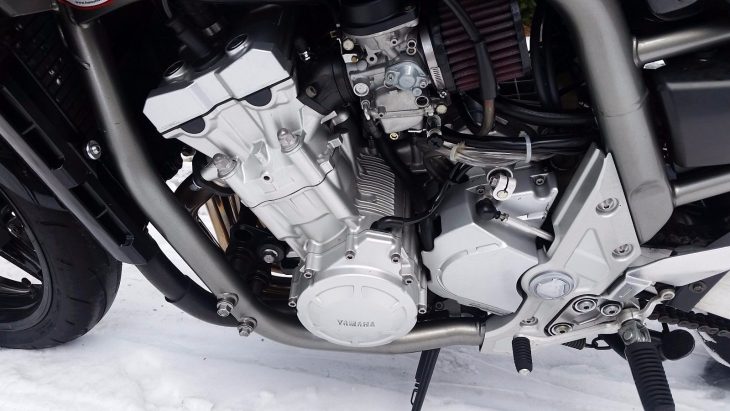 The Fazer model began as 600, but with the R1 right across the showroom, requests for the 998cc four in a plain wrapper became too numerous for Yamaha to ignore.  The FZ takes advantage of the Genesis five-valve heads and EXUP exhaust, which tailors the dimensions of the exhaust collector to engine speed.  Brakes are similar to the R1 but use a larger rear disk in anticipation of a passenger.  Frame mounted fairing is a little bigger than your average bikini, and echoes the R1 beak. 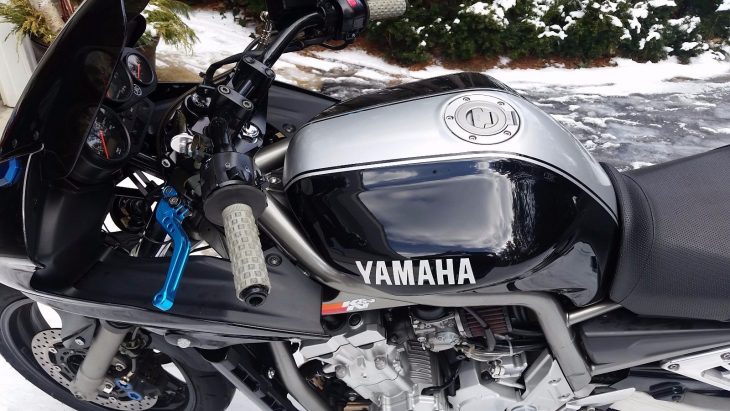 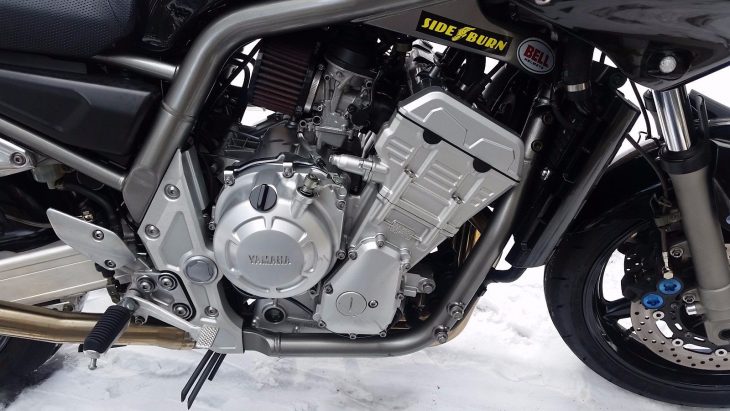 The FZ-1 was only offered in age-appropriate color schemes and this one is basic black with the steel frame in silver-gray.  The owner has deleted the frame-mounted mirrors and the blue anodized covers look good with the levers and brake caliper pucks.  But the stock mirrors will have to go back on unless the new owner picks some bar-ends, which are not part of the deal, as stated in the eBay auction:

Originally a slightly detuned version of the R-1 this is a torque monster. This bike is not detuned. It has a full stage 3 modification from Fast Bikes in Grand Rapids. He now works at Fox and does all the engine tuning and dyno testing. This bike pulled 136 HP at the REAR WHEEL. A huge grin to ride. And comfy enough to ride all day long.
It pulls like a jet from 30 to 110 and I have seen 154 on the speedometer.
All the original parts go with it. I did think it was a bit plain so put vinyl accents on it. Also the tank bag, soft bags go with it. The soft bags had lousy rain covers so I had some made from Sunbrella waterproof covers.
It has plug covers where the original mirrors were. I have the original mirrors I had trouble seeing behind me with the stockers. So I put very pricey bar end mirrors on it. I am keeping them. All stock parts except the original pipe go with the bike. 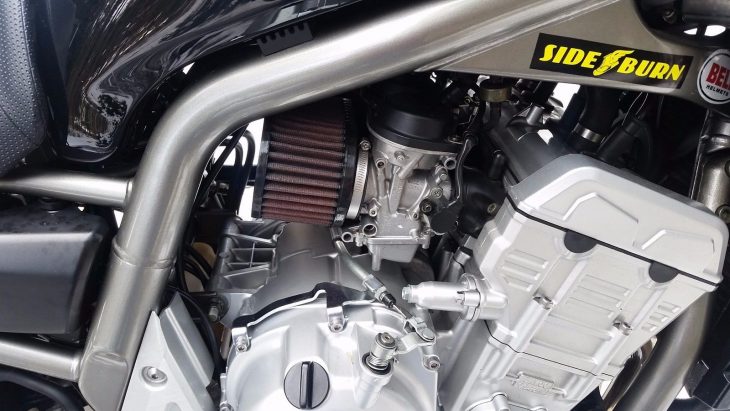 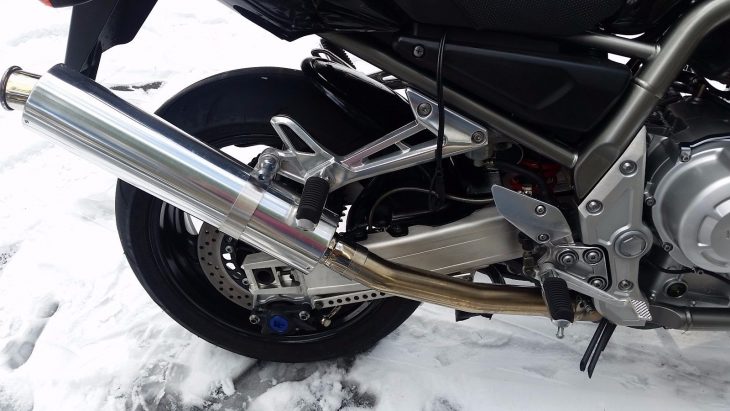 The FZ-1 was a good seller, so while rarity wouldn’t be in the cards, this unusual level of tuning might be worth looking into.  The FZ-1 reviewed as a real-world R1, and while compromises in the chassis and weight can’t be denied, you can hack around town most of the afternoon and still have the energy for a quick jaunt on a back road.  This one has some neat professionally done mods and looks well cared for… 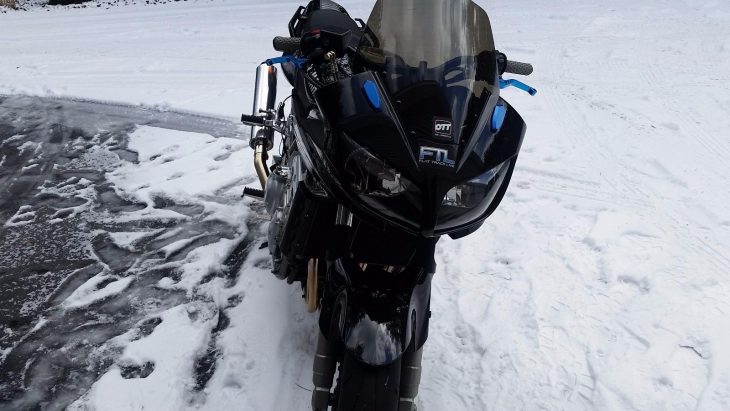