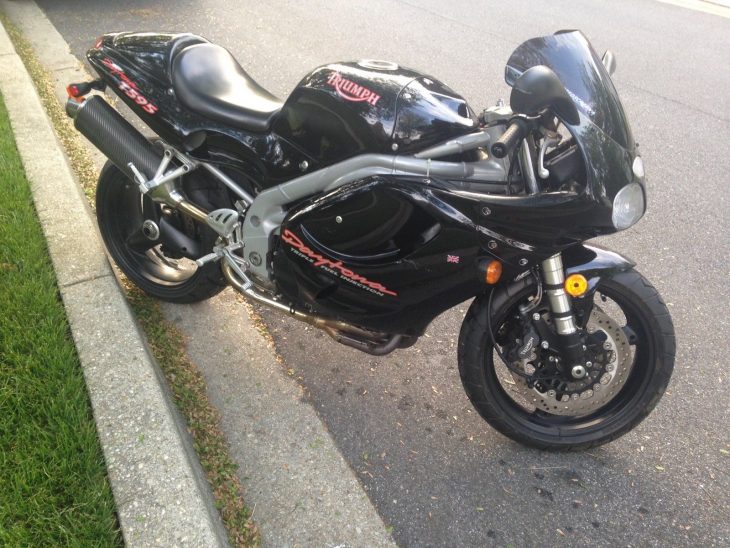 After the John Bloor resurrection of the Triumph brand and some experimentation with both three and four-cylinder engines, it became clear the triple supplied the right blend of weight, power, and perhaps most importantly, character that provided an alternative to the run-of-the-mill fours then dominating the sportbike scene. The original Daytona used a spine frame common to all Triumph models of the period that compromised weight distribution and handling, but the newly revised Daytona T595 introduced in 1997 used an all-new tubular cast-aluminum frame that lowered the center-of-gravity and improved handling. 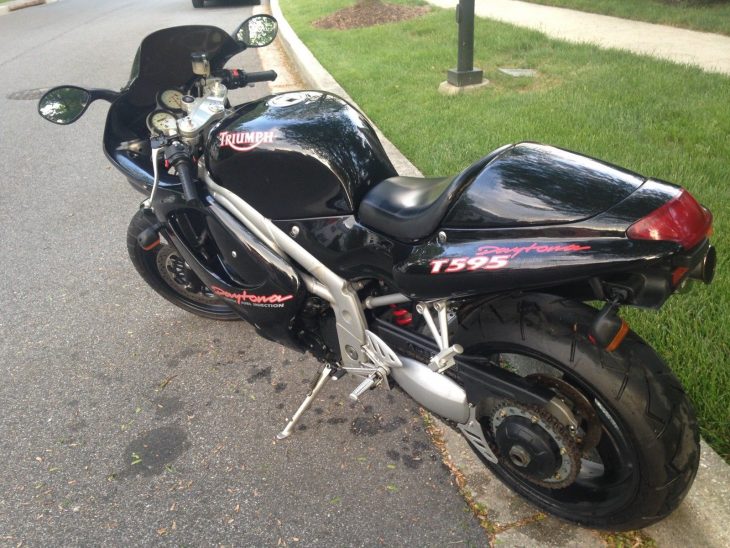 The new Daytona was still a bit heavier than the Japanese 750s and less powerful than the 1000s and 1100s, but that was exactly what Triumph intended. It filled a similar niche as the earlier bike, with a bit of a Goldilocks mission statement: not to hot, not too cold, it was just right. Build quality and finish were, as before, higher than the competition, with ergonomics  that were still very sporty but more relaxed as suited the roadgoing mission statement. 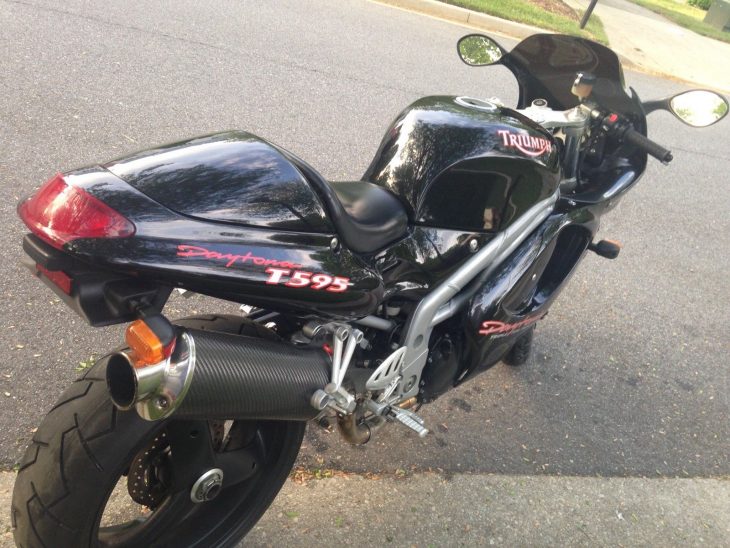 Handling was good but the racy swingarm was clearly a stylistic decision, as the bike had no racing pretensions and single-sided swingarm is generally heavier than a conventional unit. Power was a claimed 128hp that gave a top speed of over 160mph. The original Triumph performance exhaust adds value here, as aftermaket parts can often exacerbate the 3,500rpm flat spot and the early Sagem fuel-injection apparently works best with this pipe. 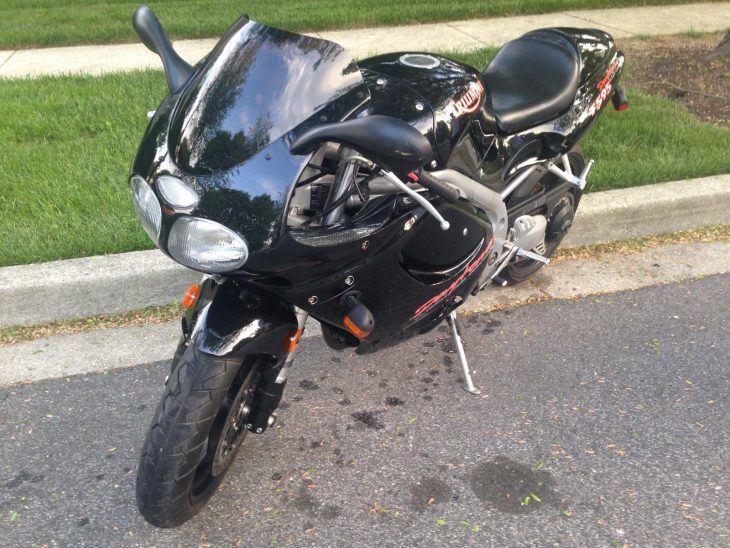 The graphics proclaim this a T595, although 1999 saw the introduction of the 955i that displaced the exact same 955cc as the earlier version and was mainly intended to clear up the misconception that the Daytona was a 600cc machine. Assuming the year is correct, it’s likely from before the changeover to the new name. Black is always a classic choice, but the bike looks especially sharp in silver, or the retina-searing “scorched yellow” that somehow suits the otherwise elegant machine. 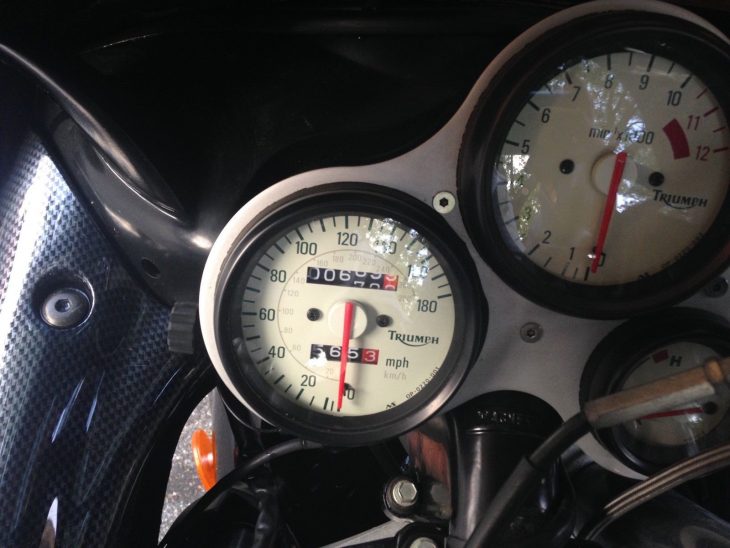 From the original eBay listing: 1999 Triumph Daytona T595 for Sale

99 Triumph Daytona for sale. Has been sitting in the back of garage for years. All fluids need to be changed and bike needs to be serviced. Bike needed a rectifier when put away. Deployments and life got in the way of enjoying this beauty. Any questions about the bike feel free to ask. GRD Cycle in White Plains MD swapped the frame for me due to a hairline crack. I have the paperwork of original purchase and frame replacement. Triumph carbon fiber accessories and trim included. Original Triumph pipe and high mount Triumph pipe included. (High mount pipe adds some hp & shows off single side swingarm wheel) Racing belly fairing, bike stand & passenger seat included also. Clear title in hand. 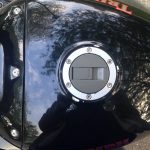 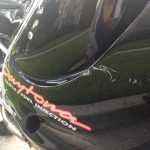 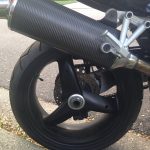 The Buy It Now price is set at a very low $2,499 with a starting bid of $1,499 and no takers yet, which might be a result of the bike’s current non-operational status, although a rectifier shouldn’t be too difficult to source. The title is claimed to be clear and the paperwork documenting the replacement frame should hopefully ease the fears of buyers, considering that this was a well-documented issue and a factory recall on the earlier bikes. It’s hard to get a good bead on the bike’s condition from the photos: black can be tricky to photograph effectively, but it appears to have suffered a bit in storage or had a minor tip over, with a couple scratches and damaged signals. The bike is also missing its belly pan in the photos, but is claimed to be included in the sale. It needs a bit of love, but the important parts are there and the miles are extremely low. 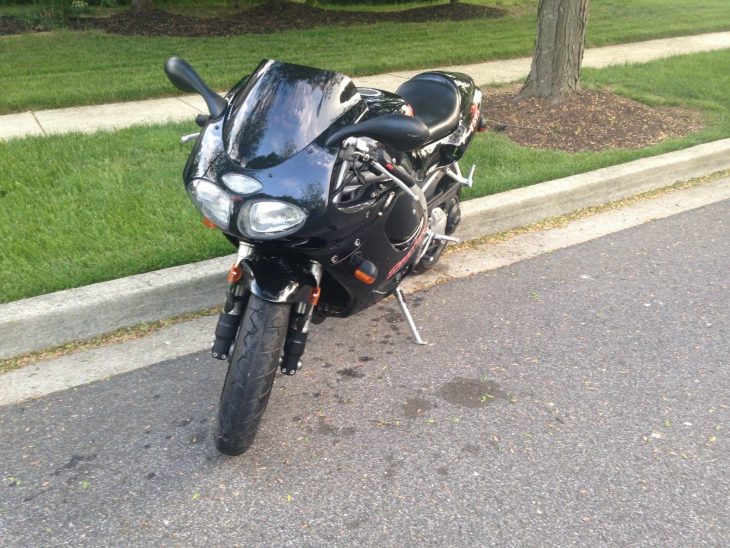