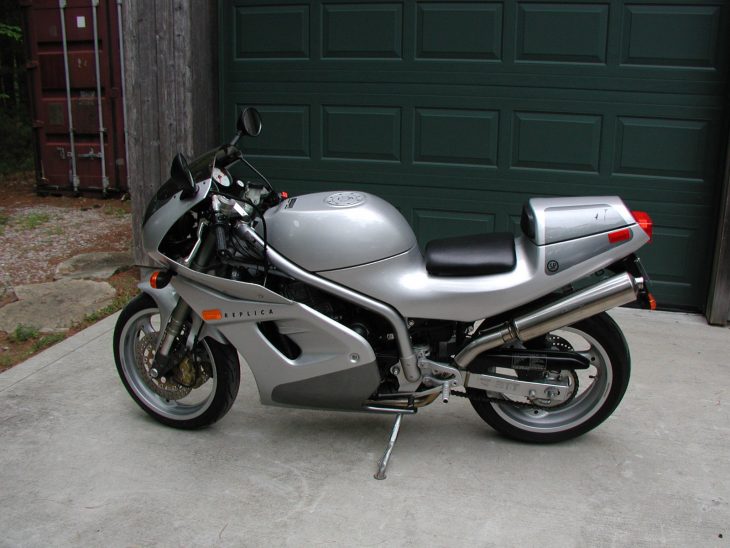 Very much a sportbike designed for the masses, the MZ Skorpion Replica has everything you need, and nothing you don’t. Included is a sophisticated frame, adjustable suspension front and rear, sleek bodywork, and a flexible, simple, reliable, and easily-serviced engine. What it doesn’t have is expensive, difficult to maintain technology, or an excess of power that most riders really don’t need anyway. A true sportbike with a simple, humble powerplant, it’s a shame they weren’t able to sell very many when new. 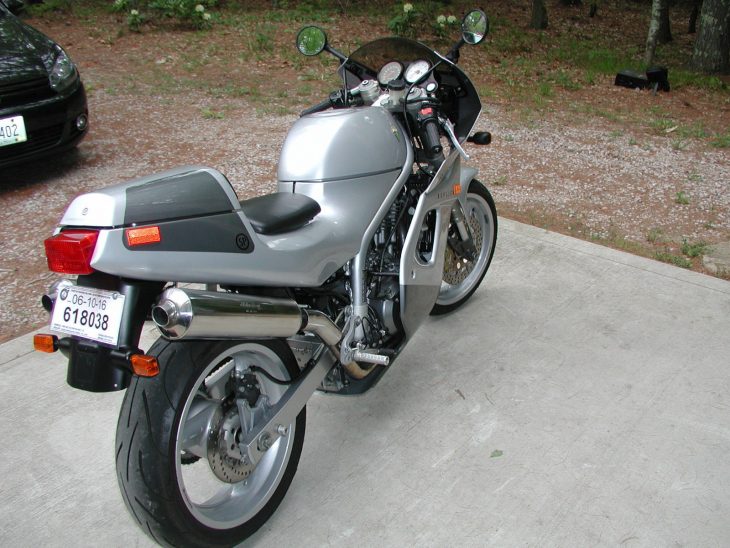 If you’re not familiar with MZ, they were an East German motorcycle manufacture most notable for completely dominating two-stroke racing in the 1950s using Walter Kaaden’s revolutionary expansion-chamber tuning. Factory rider Ernst Denger defected to the west, and gave the technology to Suzuki which effectively ended the dominance of MZ, then known as MuZ. The reborn MZ of the 1990s was a bit like Triumph of the same period: both built an entire family of motorcycles around the same basic frame and engine. MZ’s frame was actually a bit more sophisticated than the Triumph’s, and they used Yamaha’s torquey 660cc five-valve single and five-speed gearbox. The result? A brace of sportbikes, a sport-touring machine, a dual-sport, and even a supermoto. 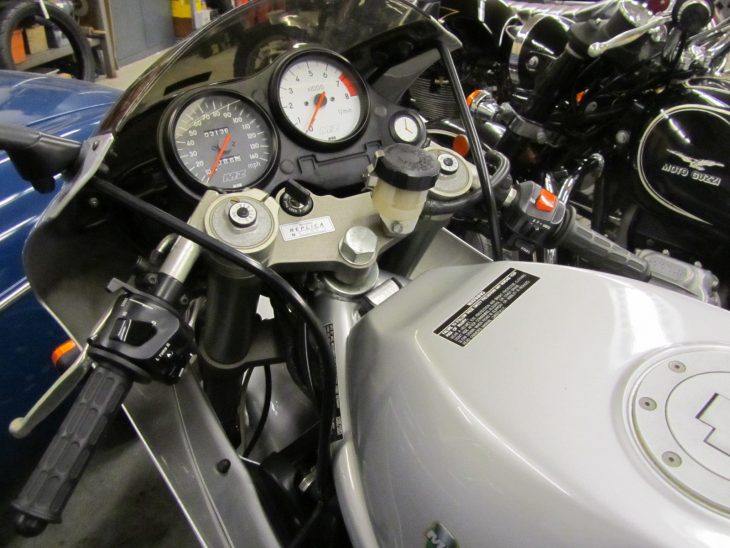 The Replica really was a high-spec machine, aside from that relatively pedestrian engine. 50hp and a wet weight of just over 400lbs don’t offer scorching straight line performance, but that wasn’t the point at all. The Skorpion was still capable of an honest 110mph and those triple-disc brakes, with Brembo Gold Lines up front, should bring things to a halt quickly. When new, motorcycleonline.com claimed it “was one of the best handling bikes we have ever tested” helped no doubt by the light weight, the well-developed frame, and the adjustable WP suspension. 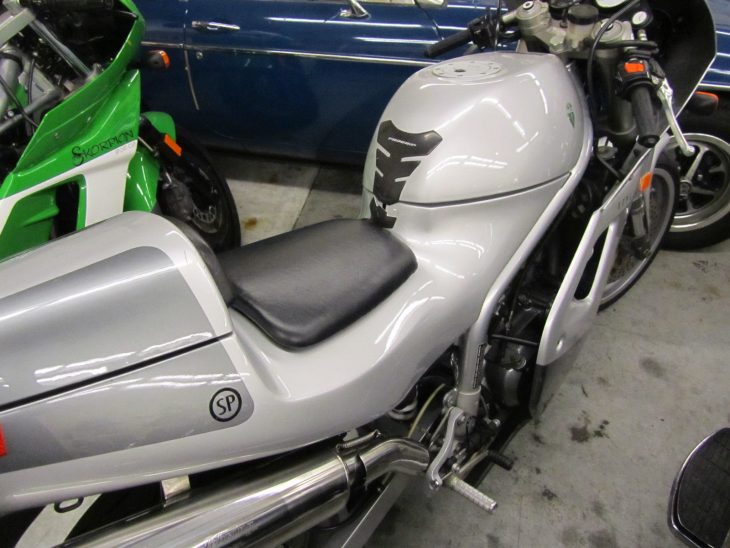 From the original eBay listing: 1995 MZ Skorpion Replica for Sale

For Sale, my 1995 Replica, number 87.  A little over 3200 miles on the odometer.  It is silver and charcoal and has several chips on rear upper cover. The bike has never crashed, everything works.  It comes with tools, owners manual, good battery and good tires. It is currently registered and ridden.  This bike does not need any repairs. Sold “as is” the bike is in Rhode Island and is available to be viewed prior to purchase. 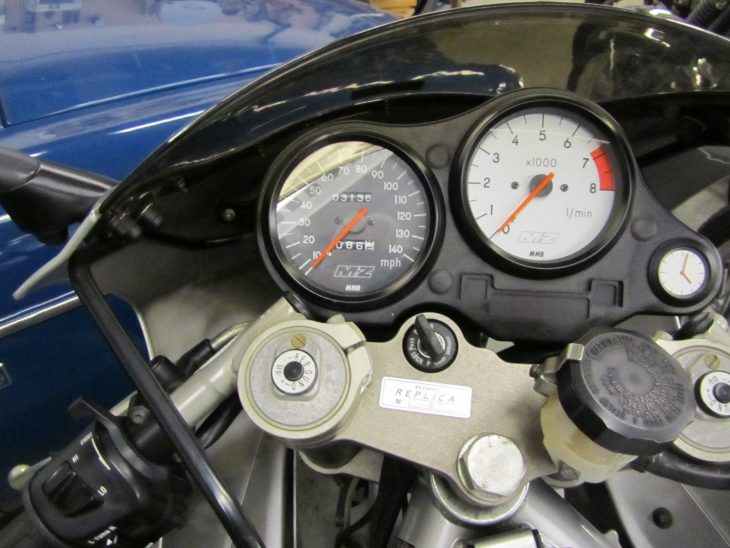 This particular MZ Skorpion Replica has very low mileage, is in excellent condition, and looks great in a very appropriately German silver color. Bidding is up to just over $3,000 although there is plenty of time left on the auction so I’m curious to see where this ends up. Regular Skorpions generally go for surprisingly low prices, but the Replica might generate a bit more attention: just 16 made their way to the US in 1996. Skorpions have become pretty popular with Sound of Singles racers of late, although this one seems way too nice and unusual to chop into a race hack. Instead, it’d make the perfect partner for embarrassing much faster machines on fast canyon rides. 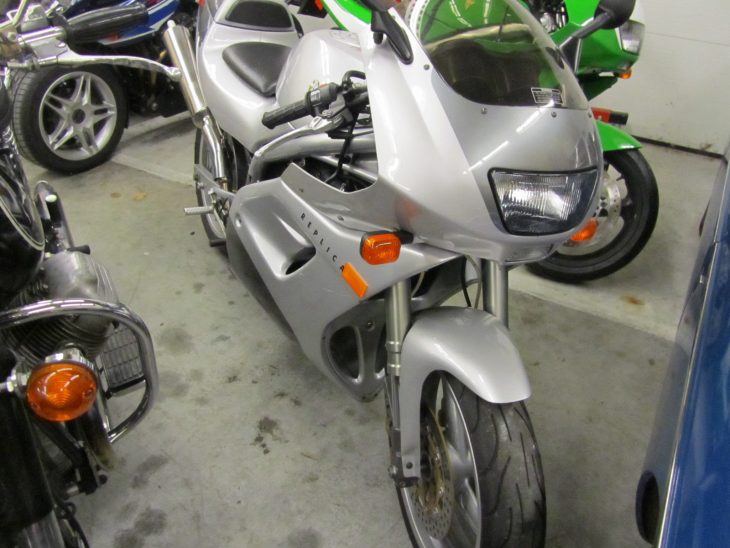