A rare sight in-person but almost a regular for RSBFS readers, the MZ Skorpion was a post-East German single 660 with a Yamaha-derived 5-valve head.  This example in Kawi-esque livery may have been owned by a dealer, who has offered other MZ’s and allowed this one only 7,000 miles. 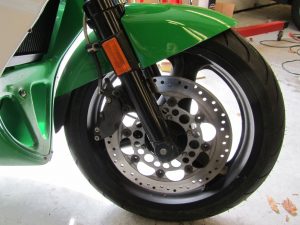 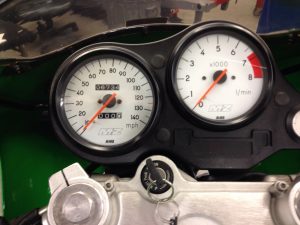 Actually drafted by Norton designers Seymour-Powell, the Skorp had a tubular perimeter frame with Italian brakes and suspension.  Licensed from Yamaha, the thumper nearly made the magic 100 hp per liter, and the smaller engine block kept weight under control at just over 400 lbs. fully fueled.  Clip-ons are sensibly above the triple tree.  The straightforward handling made believers out of may skeptics. Presented by a Rhody-based vintage Jaguar parts house, this Skorpion has what might be the factory’s only two-tone paint.  Cosmetics are excellent and it has been nicely prepared for the next owner.  Comments from the eBay auction:

This bike has under 7K miles on it, has recently been serviced, new oil, filter, plug, carburetor and filter cleaned, new battery, new Michelin tires, aftermarket exhaust.
The bike has not been crashed or damaged and needs nothing. Have title, owner’s manual, original tool kit and some maintenance records. 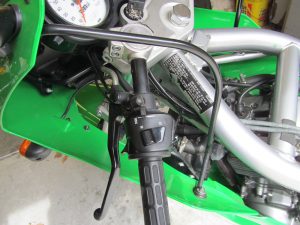 Often seen as the base for a singles track bike, this MZ might be too nice to put the knife to.  Maybe it can be the “before” picture for the racer.  Or could be the most unusual cheap sportbike, maybe the most economical rare sports machine… 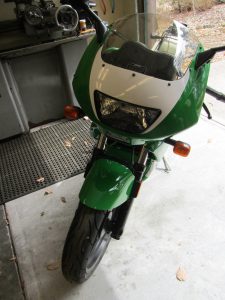