We’ve had several DB2s listed before, but none of them are of the tricolore variant which, whether you like it or not, is rather rare and hence desirable. 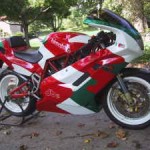 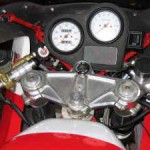 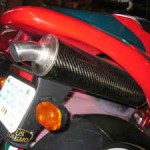 There’s no information that I can find to verify claims that there are only 34 of these in the US, but truth be told that I have only seen very few tricolors over the years.  There are several tasteful / de rigueur mods (such as the Termis…hmm!)  to the bike, so the asking price of $12000 is not outrageous, but definitely puts it at the higher end of the market – I guess the tricolore paint does demand a premium.

Update: The seller has sent the following information along to verify the 34 models stated. -dc

My source for the number of them is Bob Smith, then then-importer, who brought over 34 in a container. He had them painted in the pattern of the purple European
model, but in red-white-green. They were never sold in Europe (as confirmed by European members of the Bimota list), though there is a photo of one in the Bimota book.