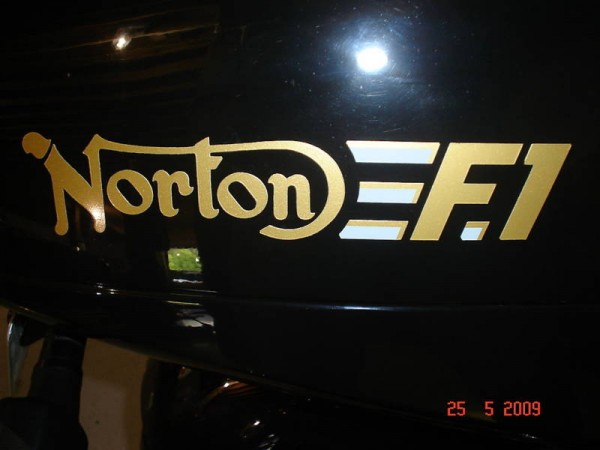 Well I guess these fall under the category of rare: he says sarcastically. We’ve got two versions of Nortons’ F1 on Ebay and Ebay UK.  Lets start with the one in the here in the States.  Don’t buy this bike expecting to join a  F1 owners club as the seller states this is 1 of 2 known Norton F1’s in the country.  I make no claim to be an expert on Norton motorcycles, all I knew was they seemed to go in and out of business frequently and that the 2010  incarnation are  sharp looking.  After a little research I came up with a few tidbits about the F1.  After several incarnations of the company,  Norton was relaunched in the late 80’s and soon experienced racing success using the Wankle rotary valve engine in the RCW588 works bike.  The F1 was built as a detuned replica of that bike.    It appears there were several versions of the F1.  I believe this is the F1 Commander, which I believe is a little less sporty than the F1 Sport you will see below.  It looks like some, if not all, F1’s sport Spondon frames.  I would assume the John Player version was a special color scheme for the F1’s.  I saw one figure claiming less than 55 of these world wide.

From the Ebay auction:

This example is one of the last series of Norton F1 built. Incredible handling and brutal speed, it is simply a wonderful machine. In superb condition, with only minor scrapes on the cowl that have been properly touched up. She runs perfectly and in just fast! 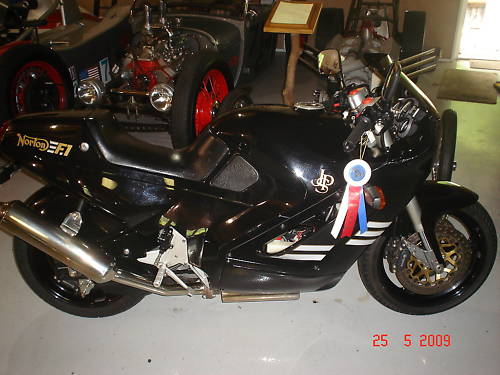 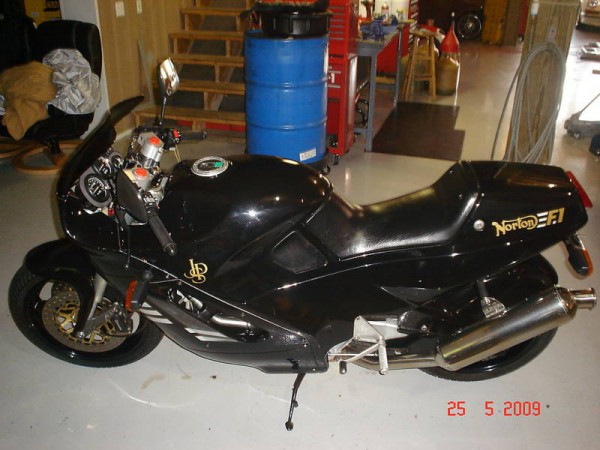 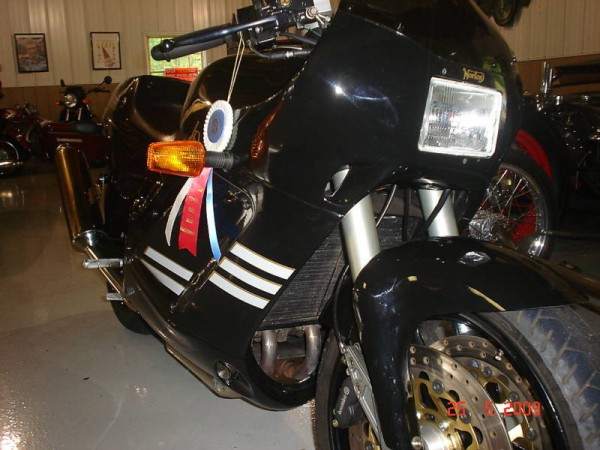 I’m  taking a pass on discussing the price on this thing.  The bidding was already up to $14,000.   If it really is one of two bikes in the U.S. and you’ve wanted one and money is not an object,  is price really a concern?  Want to wait for the next one to pop up for sale? I didn’t think so.  Check out the bidding on .

You are looking at a 1992 Norton F1 Sport (P55B) chassis number 050358. This is 1 of only 66 F1 Sports made by Norton Motorcycles in the early 90’s. It is in Norton JPS Racing colours and totally standard. The only additional work that has been done to the bike apart from routine maintenance and servicing is to Moly Inlay the inlet faces which was done by Norton Motorcycles Limited in 1999. It was first registered on the 23rd of October 1992 and purchased by me from the original owner in March 1999. It has only covered 1307 miles in total and is still fitted with it’s original Michelin tyres.  I also have the original owners handbook, F1 Sport Supplement, spare key and wallet. This bike is in excellent original conidtion with no accident damage.

The final form of evolution of the original F1 the F1 Sport (P55B) utilized the front fairing of the F1 but for that was a carbon copy of the factory race bikes, the petrol tank and seat unit both lifted straight off the Trevor Nation/Steve Spray machines. Most connoisseurs of Norton Rotaries, and certainly everybody who has had the chance to sample them all, will agree the F1 Sport was the best Norton Rotary ever produced. 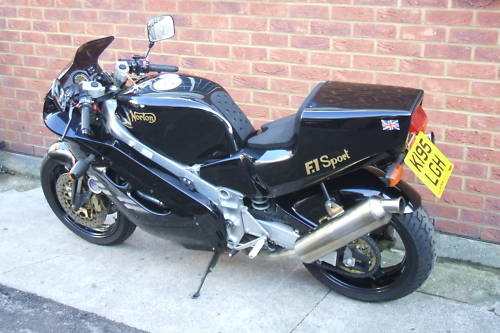 Being a little more racey, I’d assume this one will fetch even more than one for sale in the U.S.  .  I’d love to see some comments on these bikes from guys that are really up on the Nortons.