NOTE: This bike sold while I was writing the post but since its a brand/manufacturer that has NEVER been on RSBFS before, I thought I would go ahead and post it anyway.

Never heard of Moto Paton?  The story is actually pretty interesting: back in 1959 a bunch of the Italian motorcycle manufacturers all got together and decided they would all agree to reduce their racing efforts.  This “abstention pact” was signed by Mondial, MV Agusta and Moto Guzzi.  Moto Paton was founded by two former employees of the racing department of Mondial; Giuseppe Pattoni and Lino Tonti.  Similar to the later Bimota, the founders names were used as the basis of the new company (hence the name “Pa ton”).   The early Paton motorcycles blew away the competitors of the day such the Matchless G50 or Manx Norton and were ridden to success against top level racers of the day, including the legendary Agostini. 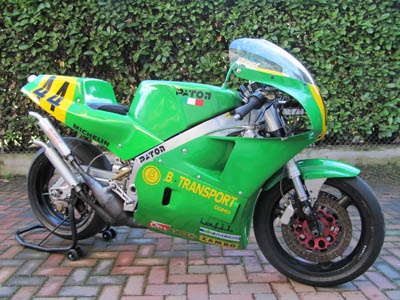 The full history of Paton is available on the Paton website (here) but as was typical for small manufacturers the company always seemed to be flirting with financial insolvency.   By the early 1980’s Paton had begun to seriously struggle and even stopped racing for a few years but development quietly continued.  In 1983 Paton returned to racing and introduced a new four cylinder V configure two-stroke liquid-cooled unit, known as the C90 due to the 90 degrees between the engine cylinder banks.  In 1986 another another engine was introduced, this time a V engine with 115 ° angle between the cylinder banks and prodcuing 140 bhp.  It was this configuration that actually gave Paton some racing success in the predessor to MotoGP.

Note:  More info about the Paton models development history can be found here and on wikipedia. 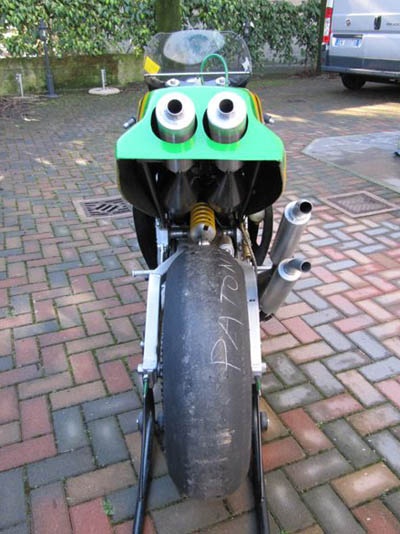 This bike is supposed to be one of only four (4) made and the only one that has survived in original condition.  The bike looks pretty close to the pictures on the Paton website except for the wheel color.   Overall the bike looks to be very clean but there isn’t much other info and pics do seem to show a worn rear tire and what appears to be a modern rear shock.

So now we come to the question of whether this bike is worth the $67,500 USD asking price  Well it will probably only appeal to to a serious collector but its certainly a rare piece.  Even though Paton has restarted operations in 2010, Paton is not something you will likely see at any events.   While it probably wont appreciate like a Supermono, it would still look very cool parked in the living room.

Note:  As stated previously, this bike sold while this post was underway.  Not sure if the $67,500 USD asking price was met.   Even though it was sold I thought it was interesting and we had never had a Moto Paton on RSBFS so I decided to post it anyway.