Honda went endurance racing in the early 1980’s, to learn things there was really no other way to know, with long stretches of Wide Open Throttle for unlimited class machines.  RSBFS reader Par brought this homologation special home from Europe and has had it tuned to match the very nice cosmetics. 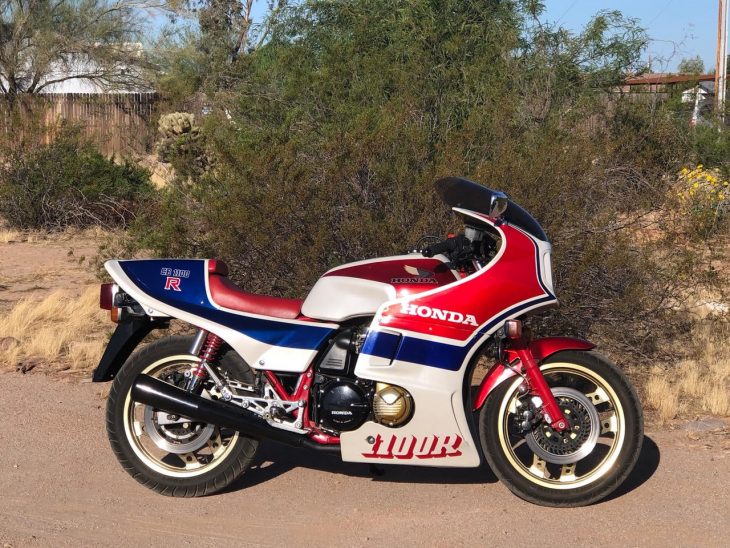 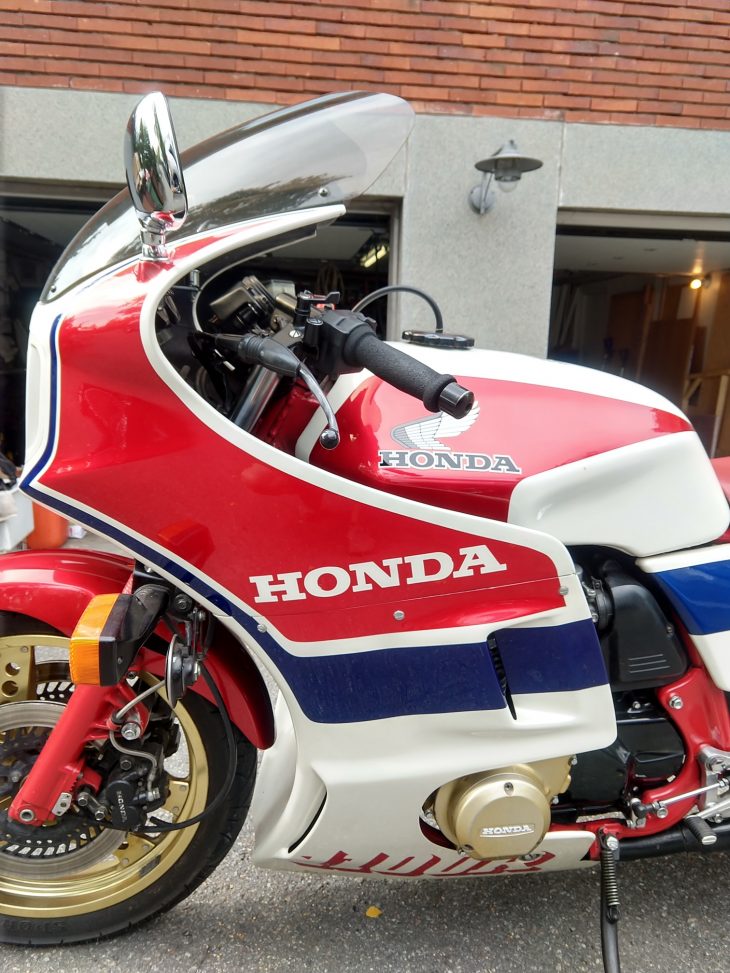 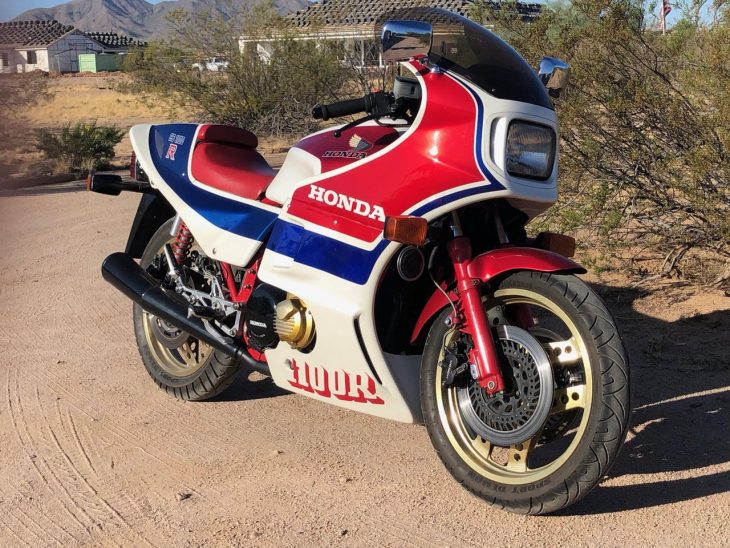 Though it has passing similarities to the CB1100F and 900F, the CB1100R is engineered for long weekends at the track.  With 10:1 compression and upgraded cams, the 1100R would like premium or race gas to get to its rated 120hp.  The engine is rigidly mounted as a stressed part of the chassis, which helps handling but transmits more vibration to the rider.  The twin rear shocks and right-side-up forks denote the decade, both multi-adjustable.  Four piston calipers are fed by braided lines but the disks are more exotic, 296mm of cast stainless with internal venting.  Gold anodized Comstar wheels were wide for the day, at 2.5 and 3.0 inches.  Hand-laid carbon fiber was used for the fairings, and there is a theoretical pillion ( required for homologation ) under the tail fairing. 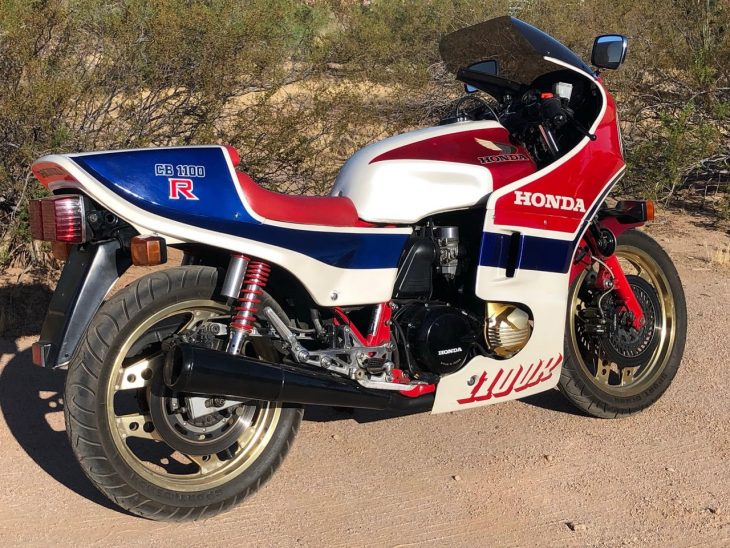 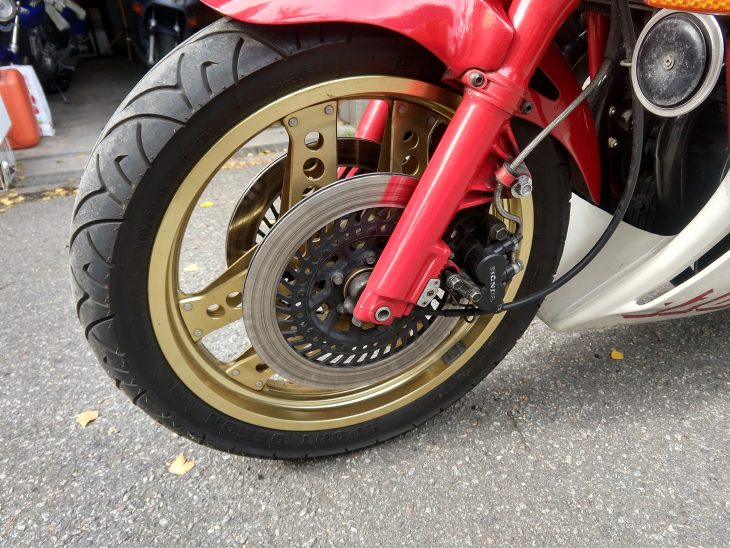 Par is a longtime fan of the CB1100R, and knows their strengths and foibles.  Surprisingly stock, right down to the black-finished muffler.  Along with its rarity and very good condition, the bombproof build and recent maintenance can give the new owner confidence in the ride. 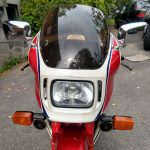 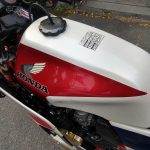 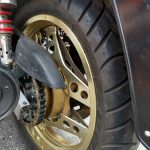 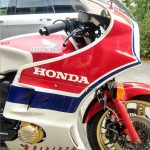 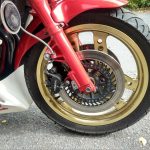 I used to have one of these bikes that I bought new in 1983 and rode for several years and from that point on it has always been my favorite bike. I was over working in Europe last year and found this bike for sale and could not resist buying it. I was not disappointed, it still rides like a dream. The bike is not mint but in very good shape for a bike that is almost 40 years old. After I brought it back I had mechanics go through the bike very thoroughly and all I ended up having to do was having the valves adjusted properly, rebuilt/cleaned the carburetors and rebuilt the rear brake. It now runs and rides as new and is 100% stock. And has 92,400 kilometers on it.

Extremely Rare Classic Collectable.  Only 1500 full-powered CB1100R D series were built and none were imported into the U.S. The B and C series were only 100 hp.

The RD is painted in pearlescent red, white and blue. The engine covers are painted in gloss black, the gold covers received a much deeper color than the earlier models. The engine shares many parts with the CB1100F bike. The rear swing arm is made of rectangular steel painted silver.

“The ‘R’ bikes were produced in limited quantities from 1981 to 1983 to compete in factory endurance racing in Europe. They have been touted as “the ultimate peak of development for the DOHC, air-cooled, twin shock, across-the-frame four.” and dominated their racing class in 81, 82 & 83. To this day, they are considered comparable to many “modern” sport bikes. Only a few lucky people in the United States will be privileged to own a CB1100R-D as they were never officially made available for the U.S. market.”

Honda was very successful with these bikes in the famous Isle of Man TT races and they were piloted by legendary riders such as Wayne Gardner, “Rocket” Ron Haslam and Joey Dunlop. 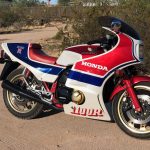 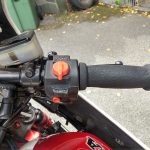 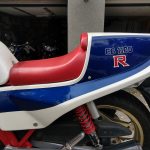 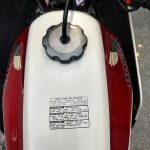 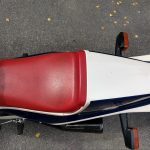 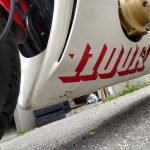 Honda did well with the CB1100R, especially in Australian and New Zealand 6-hour events, the Bol D’Or and the Isle of Man.  The clock keeps ticking however, and Honda adopted their V-4 for 1984 and brought the VF1000R.  But even the homologation special wasn’t the “endurance racer for the road” that the CB1100R was, and 1981-83 models are a distinct moment in Honda history.  Par’s sorted example looks ready to bring that experience to the next owner. 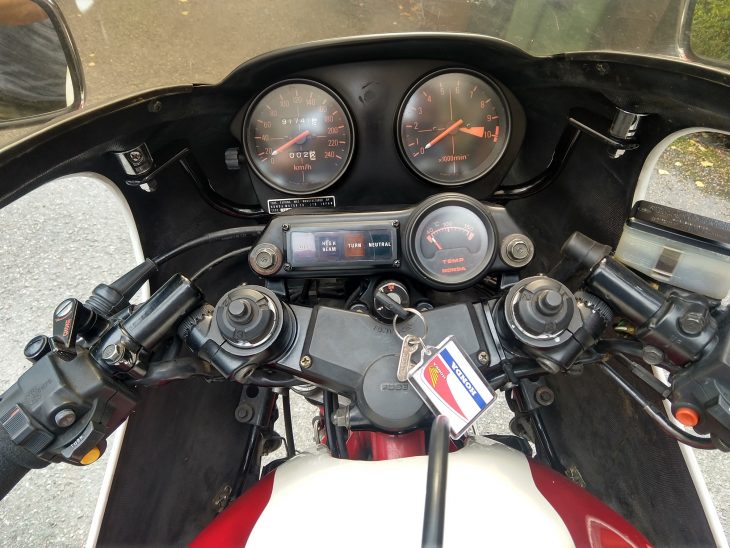