This looks to be a very nice Laverda, fully-faired, 750S with low miles!  Located in Greenwich, Connecticut is a 1999 Laverda 750S with 4,086 original miles.  The seller makes no mention of maintenance history or condition other than that the bike is in “Very good condition.”  The asking price is $7,500.  This appears to be a bit high but, with the mileage and the fact that we’ve seen very few 750S that actually sell to gauge a price on, it’s worth it to ask!

This was the first new bike to be released from the new Laverda ownership which started in 1993.  These 750s’s feature adjustable Paioli 41mm USD forks, Termignoni factory exhaust, Brembo Goldline calipers with 320mm rotors and Marchesini cast wheels.   These bikes were introduced in 1997 and lasted through to the take over by Aprilia in 2000.  I haven’t had a chance to ride one of these but I don’t doubt they just as intriguing as the Ducati SuperSports and just as good looking.  If you’d like something that is just as special as a SuperSport but also just a bit more so, see this 750S on Craigslist here. 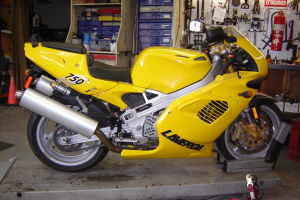 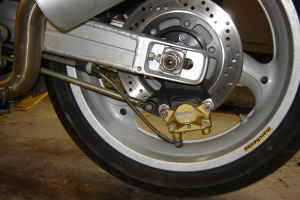