UPDATE: bidding stalled at $5,600 with the reserve still on.

We’ve had a few SS/SL listed on RSBFS lately, but it’s never to late to show another one eh? and a reserve firmly in place is this latest offering. This one is showing a mere 5,598 miles on the clock and has had a 944 big bore kit installed at some point. It also looks as though it has some tasty upgrades that include Arrow carbon fiber exhausts and a snazy yellow pin-striped Corbin seat. This one though has a very unique problem that doesn’t include the swing arm. Yes, the seller states that the swing arm has been replaced due to the classic swing arm crack. Apparently, the magnesium spokes wiggled their way loose and caused an oblong hole where they attach to the aluminum rim. There was an attempt to repair it, but from the sound of it, it wasn’t the correct fix. Have a look at the pictures and look closely at the rear rim and the alignment of the spokes on the rim. You can see that the spokes aren’t in the middle of the two depressions in the rim (not sure how else to describe it). 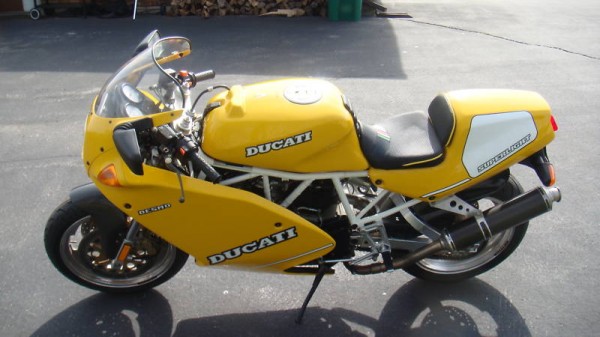 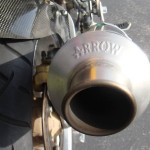 The only issue with this motorcycle is the rear wheel. Please see the picture. The motorcycle came to me with the bolts that hold the composite spoke assembly to the aluminum wheel loose. The holes in the wheel had elongated. I had the holes welded shut and the wheel centered and re-drilled a few inches away. I was told the weld was not structurally sound and could not be re-drilled in the same location. Later I was told they could have been electron beam welded and would have been sound enough to re-drill in the same location. They also said it could still be done and the new holes welded shut so the wheel would be as new. I have not pursued this and cannot say it is correct.

Okay, so it’s the only issue, but it’s a pretty major one in my book. It’s such an issue that for me it significantly discounts the bike. I may be wrong, but I can’t imagine it’s going to be easy or cheap to find a 1993 superlight magnesium wheel lying around. I’m sure they’re out there, just not easily found.

Will be interesting to see if and what this one sells for.