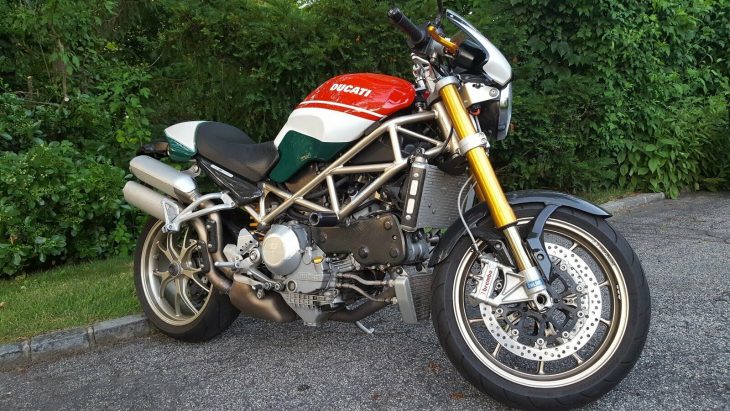 The 2008 Ducati Monster S4RS was Bologna’s first in earnest attempt at a truly ludicrous hooligan machine, and an early salvo in what is now a full-blown war to build the scariest supernaked. These days, it’s not rare to see 150-odd horsepower stuffed into a trellis frame with upright bars, but back in ’08, the 120-horsepower S4RS pretty much stopped everyone in their tracks.

Here was a bike with the suspension and horsepower just shy of a club racer and a riding position closer to a Triumph Bonneville than a 1098. Oh, and a healthy enthusiasm for pointing the front wheel at the heavens. The Ohlins suspension, gorgeous trellis frame and the love-it-or-hate-it Italian flag paint left absolutely nothing to the imagination about this thing’s intentions.

This 2008 Ducati Monster S4RS Tricolore is one of 400 in this paint scheme, and is claimed to be exactly as it left the factory. It has seen just 7,000 miles, and appears to be pretty much spotless. That’s not small feat, given that the Monster is all nooks and crannies where dirt can gather covered by the barest minimum of bodywork.

The seller is shooting for the moon on the price, but there is little doubt that these bikes will stay desirable. Still, for that price, a bit more description and a lot more pictures would go a long, long way.