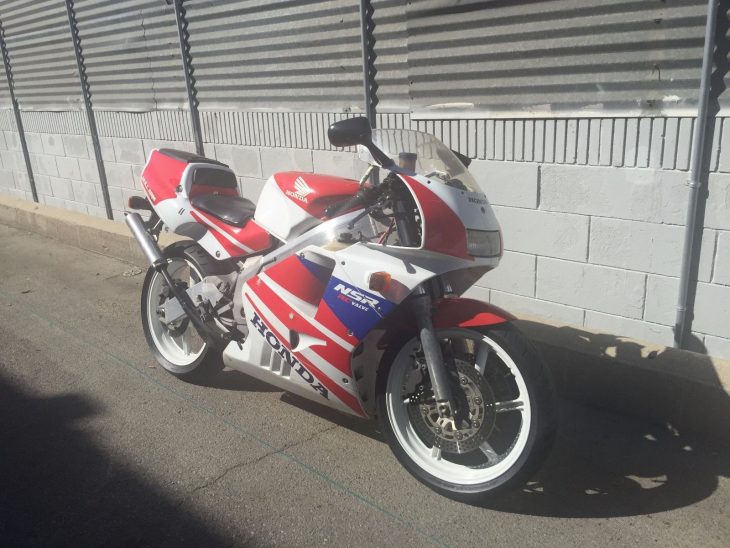 With a dry weight of under 300lbs and a responsive engine that rewards the skilled rider, Honda’s NSR250R MC21 is especially desirable here in the USA where two-stroke sportbikes died with the Yamaha RZ350 in the mid-1980s. They’ve cropped up pretty regularly recently, but are still difficult to find in good condition, as they were often ridden “enthusiastically” by their owners when new… At a glance, the MC21 continues the overall style of the earlier MC18 built from ’88-’89, but a closer look reveals that it was a nearly ground-up redesign of the earlier bike, and intended to keep pace with the rapid evolution of the class. The asymmetrical Gull Arm swingarm looks trick, and was intended to clear the bulging expansion chambers and allow maximum clearance for a bike that excelled at cornering. 17″ wheels at the front and rear means modern day riders have decent choice of rubber. 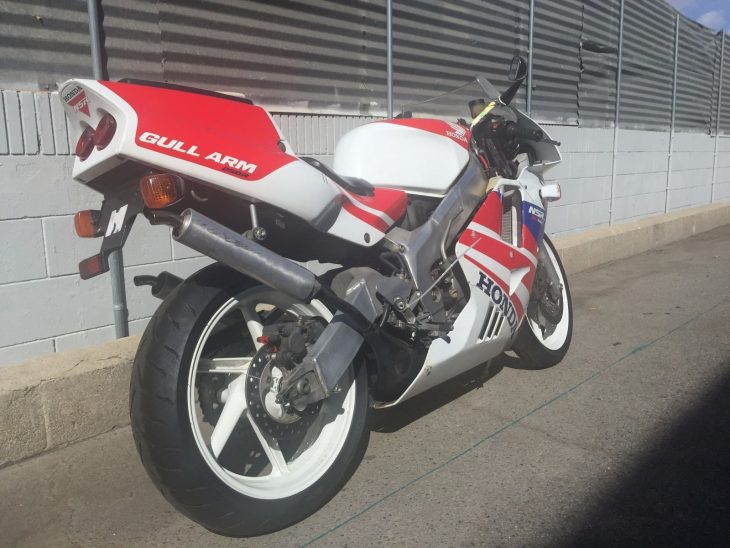 Under the skin, the NSR250R was powered by a a 90° liquid-cooled 249cc v-twin backed up with a six-speed cassette gearbox, and the pair of carburetors used Honda’s electronic PGM-III to maximize performance although the bike was limited from the factory to 45hp, per Japanese government restrictions. As the seller mentions, the actual intended performance is easily found by de-restricting the bike.

The best racer replica in its class! Even in Japan, It is hard to get this condition these days. Rare Japanese domestic model. NSR250 has not exported to any country officially. In 1988 Japanese government restrict power of 250cc motorcycle to 45HP. So Honda made this motorcycle to produce lower rpm torque than MC18 (previous model that I just sold last week). You can de-restrict MC21 easily, then it can output 65 to 70HP.
No title, bill of sale only. If you need title, additional $500 required. I do like this because in some states, it’s easy to register and in California it is hard.

This is used 25 years old motorcycle, so please check photos carefully. No warranty, as is. No return. Full payment in 7 days. cash or wire preferred.
Selling local also, so I may quit auction anytime. local pick up preferred but I can help to ship if the buyer arranged. Like bring to Forward Air terminal or other tracking company’s location in LA.

Bidding is up to just over $1,500 with a couple days left on the auction, but I expect this will end up somewhere well north of that: recent NSR250Rs have gone for between $6,500 and $8,500. The usual issues with titling and registration obviously apply here, but I’m sure there are plenty of enthusiasts out there that have the will and will find a way.
-tad