The point I was trying to make was this bike really brings me back to my younger days when I would drool over the similar styled CBR600 Hurricane.  The Hurricane was significant in that it was one of the very first sport bikes to feature fully enclosed body work to tackle the issue of  aerodynamics,  and this design influenced sports bike styling ever since.

Now this CBR250 Hurricane is in mint mint mint condition – whether it’s “Best In The World” (a pretty tall claim) is your call: 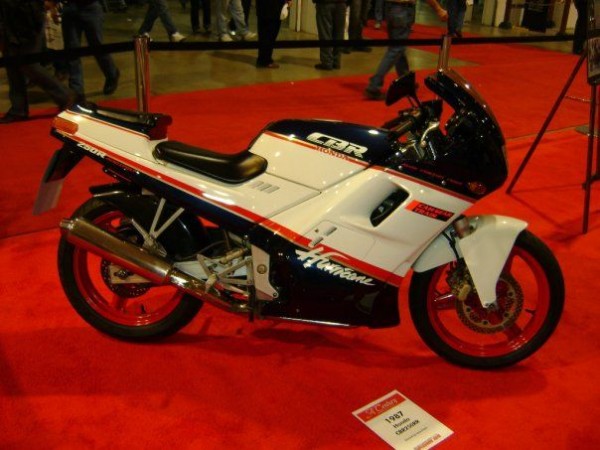 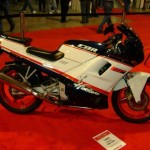 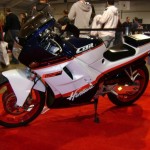 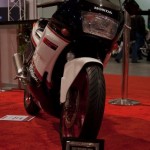 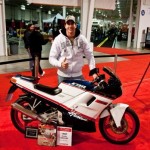 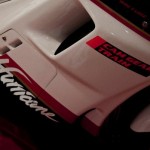 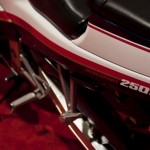 Hello my name is Joe Fazio and I am the proud owner of a show winning 1987 Honda CBR Hurricane 250 MC17.. WORLD CLASS.

It is known to be the best vintage cbr250 in the world for the MC17 model.  It is Ultra Rare… and Almost none existent. (only made one year, and only available in Japan). also on top of all this it claims to be the fastest and most torque at the lowest RPM out of any other 250 4stroke produced. It starts first shot and runs amazing and like brand new in every way imagined.. totally mint without one flaw.

The bike is spotless and over the past winter was accepted into the Toronto Motorcycle International Supershow..where it came 2nd in its class in the Vintage Japanese Sportbike class out of many other bikes and was the lowest cc in the class by minus 500cc… (3rd was a slingshot 750, 1st was a gsxr 1000) to be honest i should of stole the prize haha but that just the way it goes, it was a great experience.

On top of being in for the award, it got excepted into a very special and most prestigious hall…The Century Of Motorcycles…. this hall made up 50 bikes that were hand picked by the producers of the show to represent a Century of motorcycles and mine was elected into this hall. I am from Toronto Ontario Canada and it is a clear title with the ownership and is ready to purchase and ride, or for your museum or collection…. this bike will never be for sale again in the way it is at this moment in time…It is a true piece of history..the one and only,………….serious buyers please.

So there you have it – the best CBR250 MC17 Hurricane there is in the world.  Seriously, it’s a super nice bike in near new condition. Whether it is worth the $15,000 asking price – well, I’ll just grab a coffee and watch the auction run.

Been dragging my feet on these postings, so I apologize for getting these up so late, but there’s still time until the auctions end.  Besides, I would have posted these up even if the auction ended (you’ll see why).

I will list them according to vintage.  Up first is a : 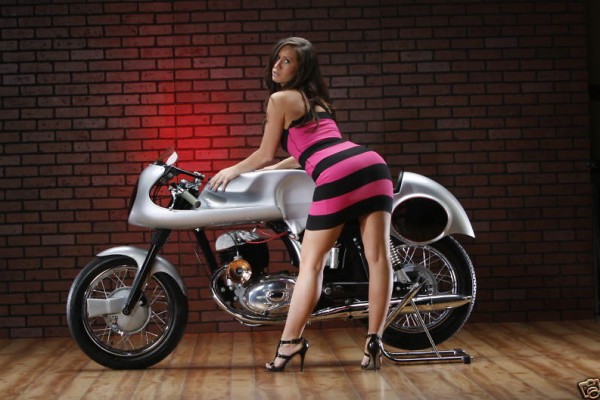 Any motorcycle collector worth his weight in salt will know that a Puch racer is a desirable and sought after machine… When was the last time you saw a Puch racer?

Puch racers rarely makes it to the open market, They are usually passed around between collectors, friends and museums… Now is your opportunity to add a highly desirable bike to your collection…

This bike has a fresh motor and runs great…. This restoration is the best of the best and almost to nice to race. If you have ever thought about vintage road racing this would be an excellent bike. This is a rare opportunity to get a beautiful motorcycle… don’t let it slip by…

I can’t say I know much about vintage race bikes, but I fully agree with the seller: “When was the last time you saw a Puch racer?”

The brunette bike is absolutely gorgeous and I can only guess that this is a very very collectible bike (just like the other two coming up).

The second bike is also from the seller of the Steyr – Daimler – Puch road racer posted earlier (actually, all three of these rare vintage race bikes that I am posting are from the same seller!) is a : 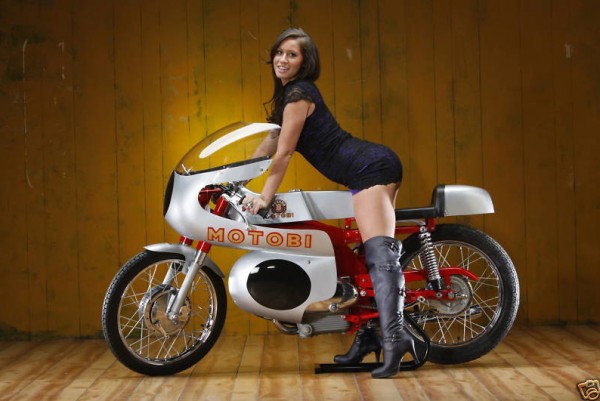 Any Italian motorcycle collector worth his weight in salt will know that a Motobi racer is one of the most desirable and sought after machines… A Motobi racer rarely makes it to the open market… They are usually passed around between collectors, friends and museums… Now is your opportunity to add a highly desirable brand to your Italian collection…

This restoration is the best of the best and almost to nice to race. If you have ever thought about vintage road racing this would be an excellent bike

Again, I don’t know much about Motobi except that it was founded by the eldest of the Benelli brothers – Giuseppe Benelli – because of a family feud. Motobi racers were also quite successful in their time, winning quite a few Italian championships in 125cc, 175cc, and 250cc classes. You can read up on some of that interesting Motobi history here.

The last one is probably the most “famous” or well known (and definitely the most desirable and collectible) of the three – a : 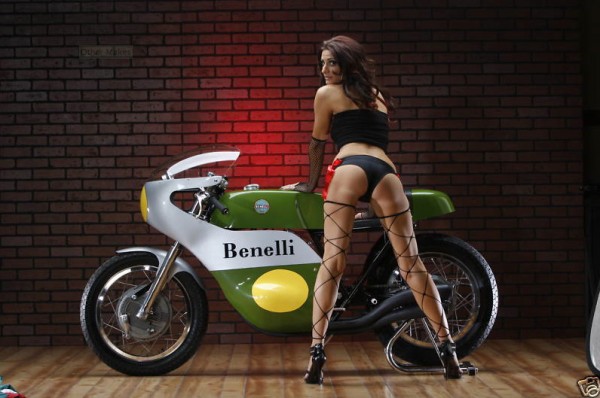 Any Italian motorcycle collector worth his weight in salt will know that a Benelli racer is one of the most desirable and sought after machines… A Benelli racer rarely makes it to the open market… They are usually passed around between collectors, friends and museums… Now is your opportunity to add a highly desirable brand to your Italian collection…

Even without being an expert, I know almost any Benelli from the previous era is desirable and collectible.  With this being a 500cc GP racer, I am not surprised with the $18,000 Buy It Now price.  Regardless of if you are into the classics, how can you look at those curvy legs exhaust pipes and not fantasize about the beautiful howl from that engine?

Found this sweet located in Dan’s backyard (Damascus, OR) so I thought I’d get it posted up before he did…..;o)~ 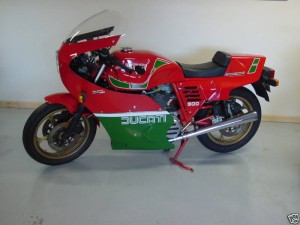 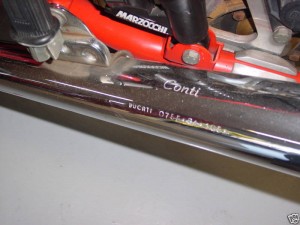 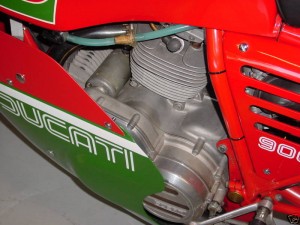 I’m a self admitted “don’t know a whole lot” when it comes to Ducati’s, but I know Dan and Mark over at Ducati News Today do, so I’m sure they’ll save me once again.

It looks clean, complete and it’s a replica so I figure I can’t be too far off base on posting this one.

1984 Ducati Mike Hailwood Replica. Although this bike is titled as a 1982, the serial number and configuration make this one of the last 50 900 MHRs before the switch to the Mille (1000cc). This bike has the late dry hydraulic clutch, adjustable clip-ons, air fork cap, calipers mounted on the rear of the fork legs, etc as noted in Ian Falloon’s DUCATI BIBLE, 8560, 900 & Mille. It also has the late style side cases (well, it’s not really a “round case”, but they do look better).. This bike is in excellent cosmetic and mechanical condition and only has 14,818 Kms on the clock, which transalates to just shy of 9200 miles. It has been fitted with extra large K&N filters to allow the the 40mm Dellorto’s to breath and exhaust thru a set of proper Conti mufflers. It also has been fitted with a “gear gazer”. I’ve recently replaced the chain and sprockets with top end products from BevelHeaven. The battery is also a sealed AGM battery that I sourced from Bevelheaven. I also went thru the carbs and replaced the fuel petcocks, fuel line and new filters, because the original line was very hard and I was afraid it would crack. The seat cover was replaced with a new original from Andy at Desmo.de because it has a small tear. I left off the passenger grab strap because I didn’t care for it’s look, but it is included with the bike. The chassis number is DM900R1 906448 and the Eng # is *909248 *DM860. This bike is only 58 numbers older than the MHR that recently sold here for $21,600 early in November (Ebay item 150383231242). Included with the bike is an original parts manual and two oil filters. Note that these late MHR’s have a screw on oil filter which is much better than that on the earlier models. These motors also have an oil sight gauge in the side of the motor that is viewable thru a hole in the fairing.

Located in Libertyville, Illinois is a gorgeous 1973 Yamaha TZ250A.  This bike has been meticulously restored to original specification and looks brilliant.  The motor has recently been gone through and the seller claims it only needs tires to be vintage race ready.  Vintage race bikes are attractive because they will always be competitive compared to a newer bike which will become out-dated. See this beautiful race bike on eBay See the eBay ad here 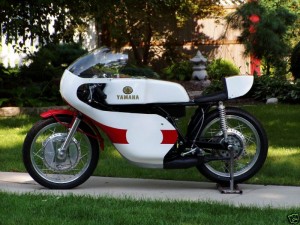 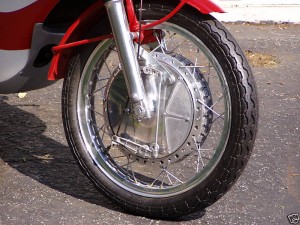 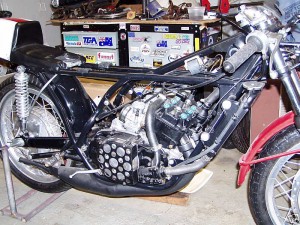 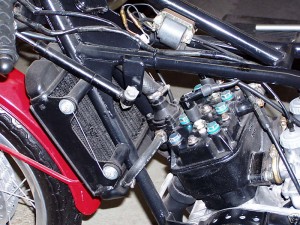 Also, avialable in Tokyo, Japan but listed on eBay U.S.A. is a 1980 Yamaha TZ250G.  This bike is claimed to be completely original, only having one owner.  Being an original bike, this one isn’t perfect but carries some patina and wear–especially on the left-hand side faring.  Seller is located in the US and claims shipping isn’t a problem.  See this one owner TZ on eBay here. 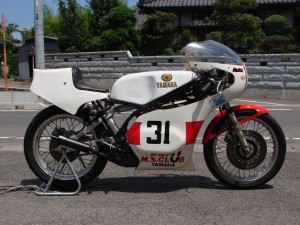 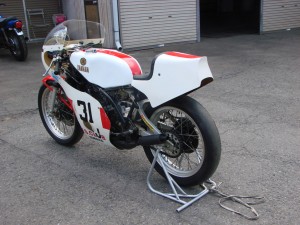 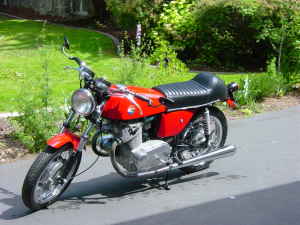 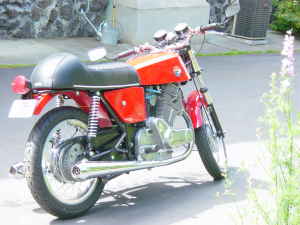 I restored this 1969 Laverda American Eagle 750 GT in 2005. It has a McCormack Motors tag on it with a VIN of 1322. This was a frame up restoration. The frame has been powder coated and the paint is fresh. The motor has been rebuilt with the assistance of the North American Laverda expert, Wolfgang Haerter. The tank, seat, silencers, front fender, and instruments are not original. The instruments are there primarily for cosmetics – the tach works and the speedo registers but is not to be trusted. The bike runs well and presents itself nicely. It has a clear Washington title. I’m asking $4,200

I am far from a market expert on any bikes, but I find I’m really behind with these vintage bikes. But this doesn’t seem like a lot of money for what looks like a really fun vintage motorcycle! Help me out in the comments if you have perspective! 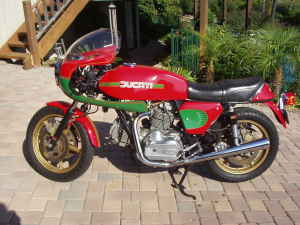 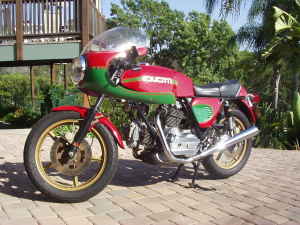 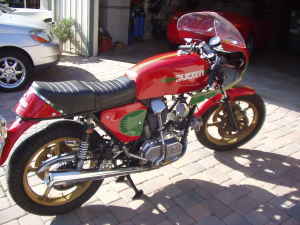