Star power. It is what sells. Be it the star power of a famous race bike, a famous team, a famous rider, a famous win, or all of the above. This is what sets certain bikes above the rest. And today’s find is a wonderful reminder that the lime green team was once a very dominant force in racing other than WSBK. This bike is a claimed works Kawasaki factory KR750 racer, piloted by none other than Mike Baldwin. 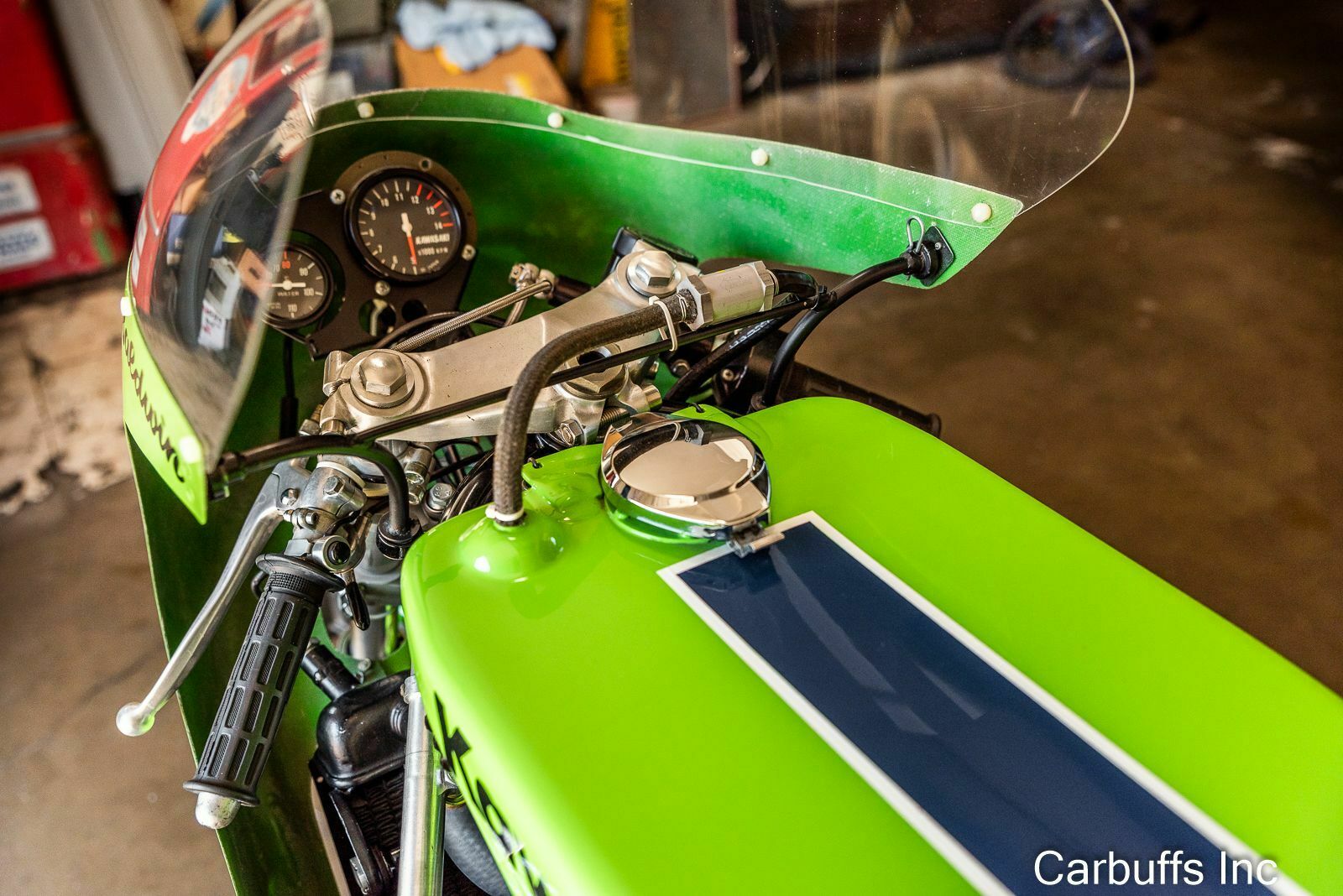 In the early to mid 1970s, there was a flurry of activity on the racing scene. Yamaha had brought out their TZ750 – which looked to dominate all and sundry on both the factory and privateer levels – and Kawasaki wanted a piece of that action. Having a successful two stroke in the form of the H1 triple style, Team Green acted quickly to assemble a factory racer that could bring home the gold. With lower restrictions regarding homologation, Kawasaki was able to make use of existing tech, massage it heavily into GP-level machinery, and unleash it upon the world. Utilizing a 750cc triple, Kawasaki offset and skewed both the intake and exhaust ports to narrow the now liquid-cooled motor significantly. A one piece crank simplified the overall engine arrangement (as opposed to the Yamaha, which utilized a series of intermediary shafts to drive the primary and ancillaries), resulting in a powerful, but lightweight package. Coupled with a six speed transmission, triple disk brakes, and what appears to be ancient dual-shock rear suspension, the KR750 nearly won the world championship with Gary Nixon aboard. But runaway success was not to be for Kawasaki, even though the KR750 showed immense potential. 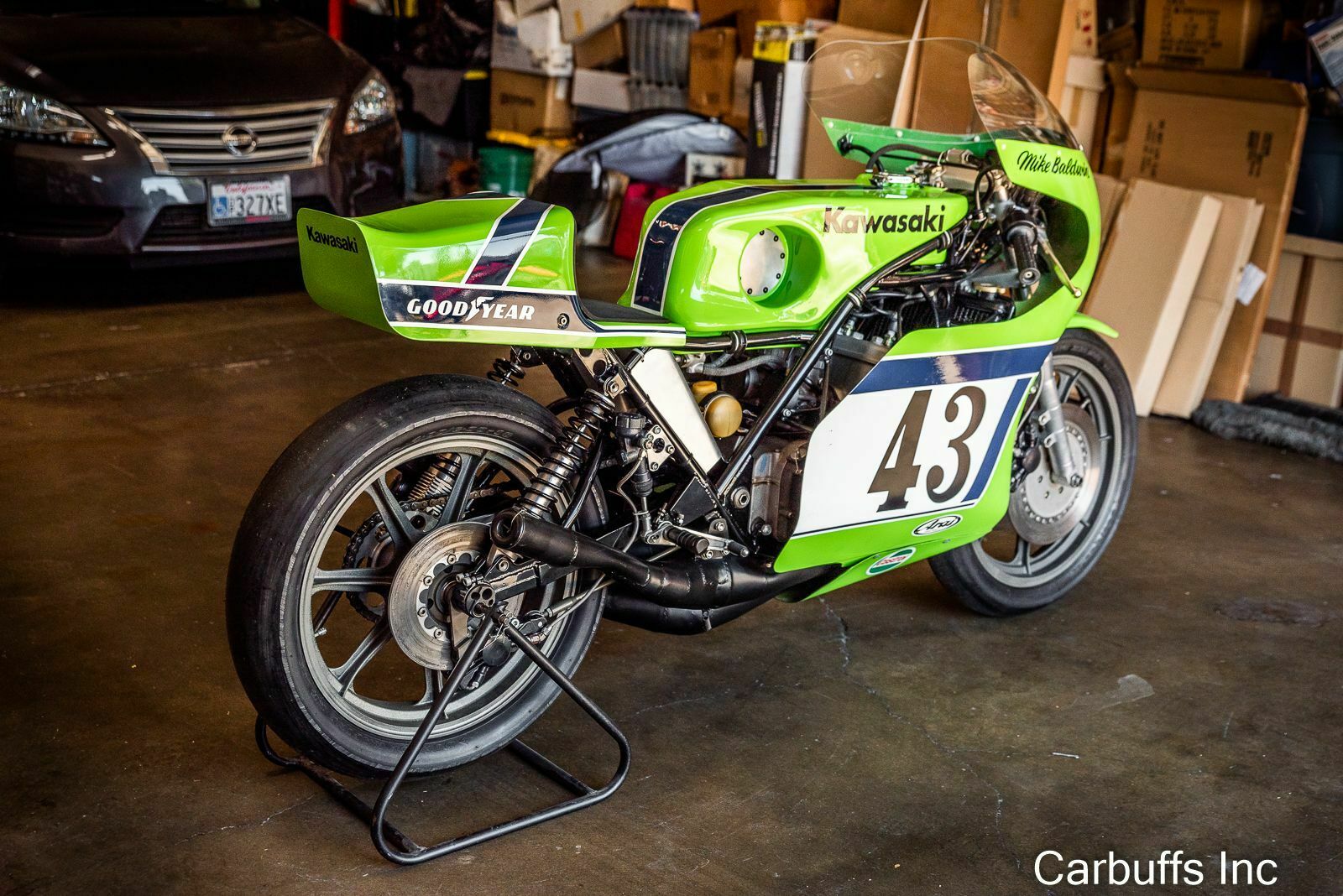 From the seller:
Mike Baldwin was a record-setting five-time AMA Road Racing Champion and the all-time wins leader in AMA Formula 1/Formula 750 history. In all, Baldwin won 27 AMA national races – 17 in AMA F1/750 and 10 in AMA Superbike – and he is considered one of the top road racers America has ever produced. More from the seller:
At Daytona in ’79, Baldwin appeared to be a real threat to win the Daytona Triple Crown (the Daytona 200, the Daytona Lightweight and the Daytona Superbike races). He was easily the fastest in Superbike and battled for top billing in the Daytona 200 and Lightweight qualifying. Unfortunately, Baldwin high-sided in practice on Thursday and broke his collarbone. Without racing in the qualifying race, Baldwin had to start from the back of the grid in the 200. The leaders had completed nearly three-quarters of a lap by the time the third wave of riders, of which Baldwin was in the back, was given the green flag. In spite of his huge disadvantage and riding in pain with the broken shoulder, Baldwin tore through the field on the factory Kawasaki KR750 and finished a strong fourth, giving him at least a moral victory. In addition to racing for Kawasaki in 1979, he also raced in Europe during the gap in the AMA schedule after Daytona. 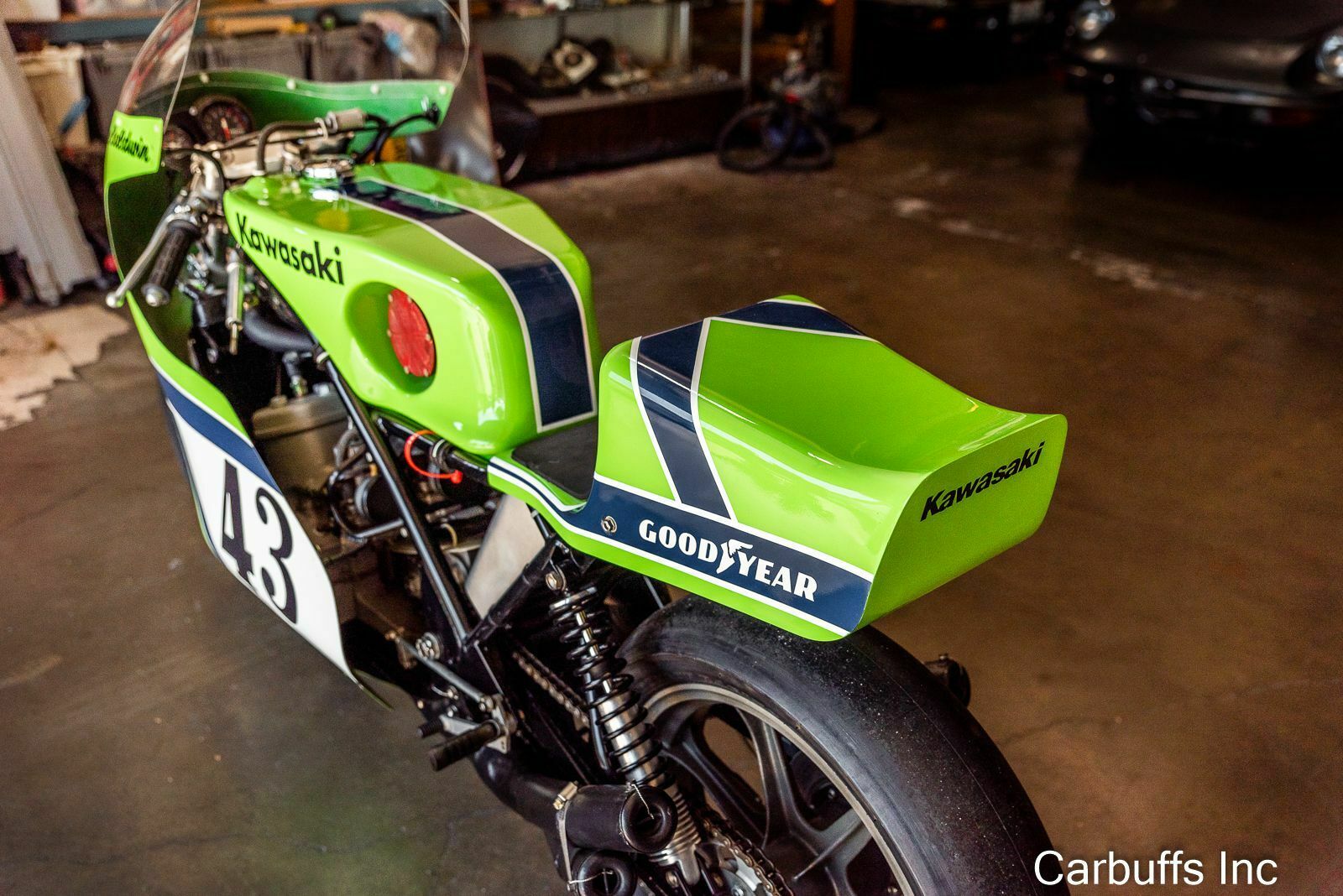 More from the seller:
The bike was restored in 1993 by author Stephen Wright with help from Norm Bigelow at the Kawasaki Racing Dept. It has been shown at Del Mar in 1997 and at the Bedford Museum in “The Wild Ones” exhibit in 2003. Also, first place at the Wheelcraft Motorcycle show at Sears Point raceway in 2001. Current owner purchased the bike from Stephen Wright in 1999. Sold on bill of sale. Race notes and history come with the bike. 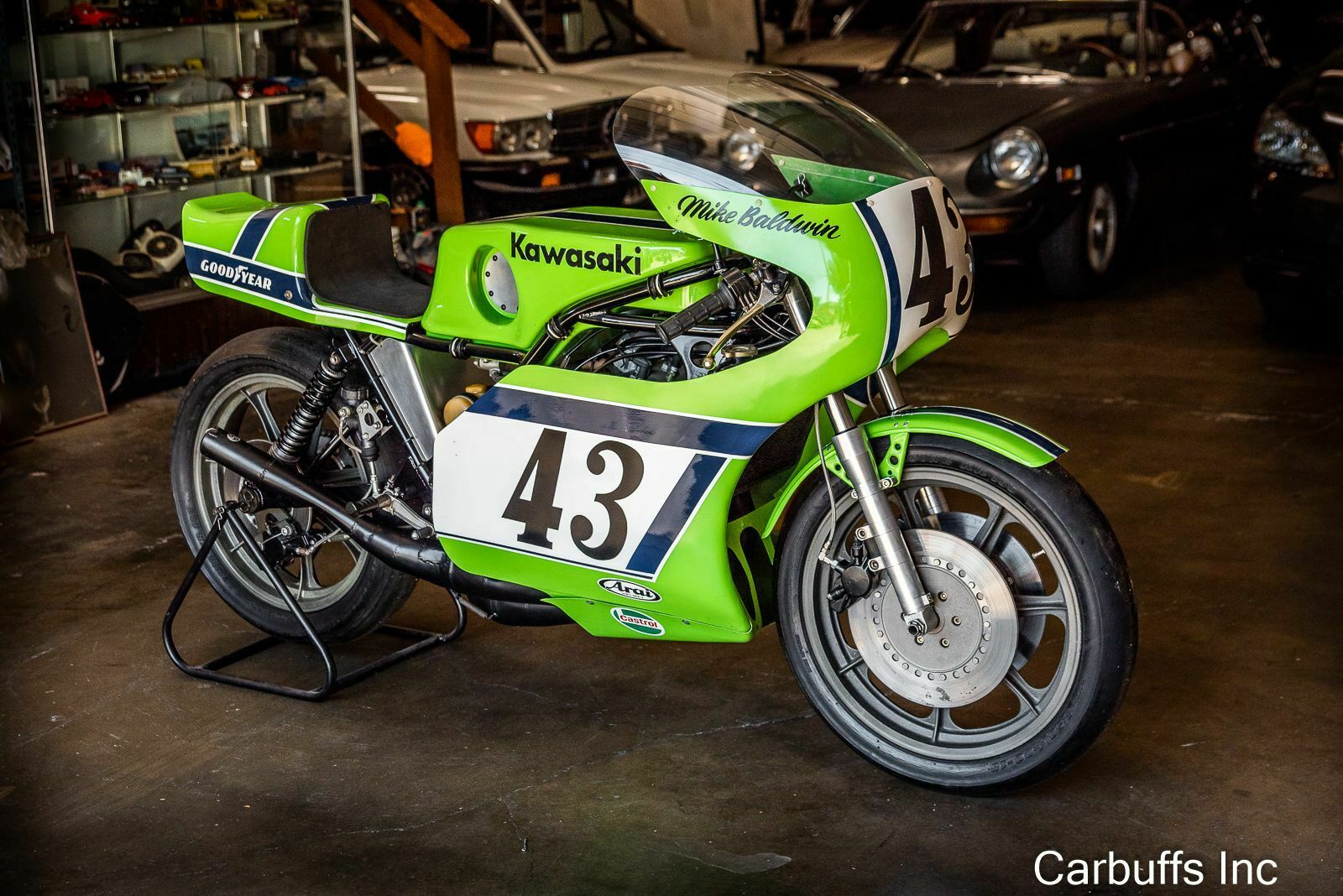 Race bikes are very difficult to judge when it comes to value. To be certain, factory racers are built and campaigned in limited supply, making them rare to begin with. Couple that with the numerous mods that occur organically over the course of several seasons (due to rules, additional performance, etc), plus the very real potential for crash damage and it is not too surprising to realize that not many of these bikes survive to be restored to this particular level. That is especially true with a well-known and respected rider, such as Mike Baldwin. The Buy It Now ask for this green monster is a very cool $125k. There is no doubt the bike is historically significant. Sadly we cannot comp this to other sales given the scarcity of pristine Mike Baldwin KR750s on the market. The seller is open to offers and it looks like there are a fair number of watchers on this one, so we may yet see a sale. Let’s all hope it finds a good home, as bikes this rich in history deserve a spot of honor. Check out all of the details here, then start shopping for some green leathers and gear. Good Luck!! 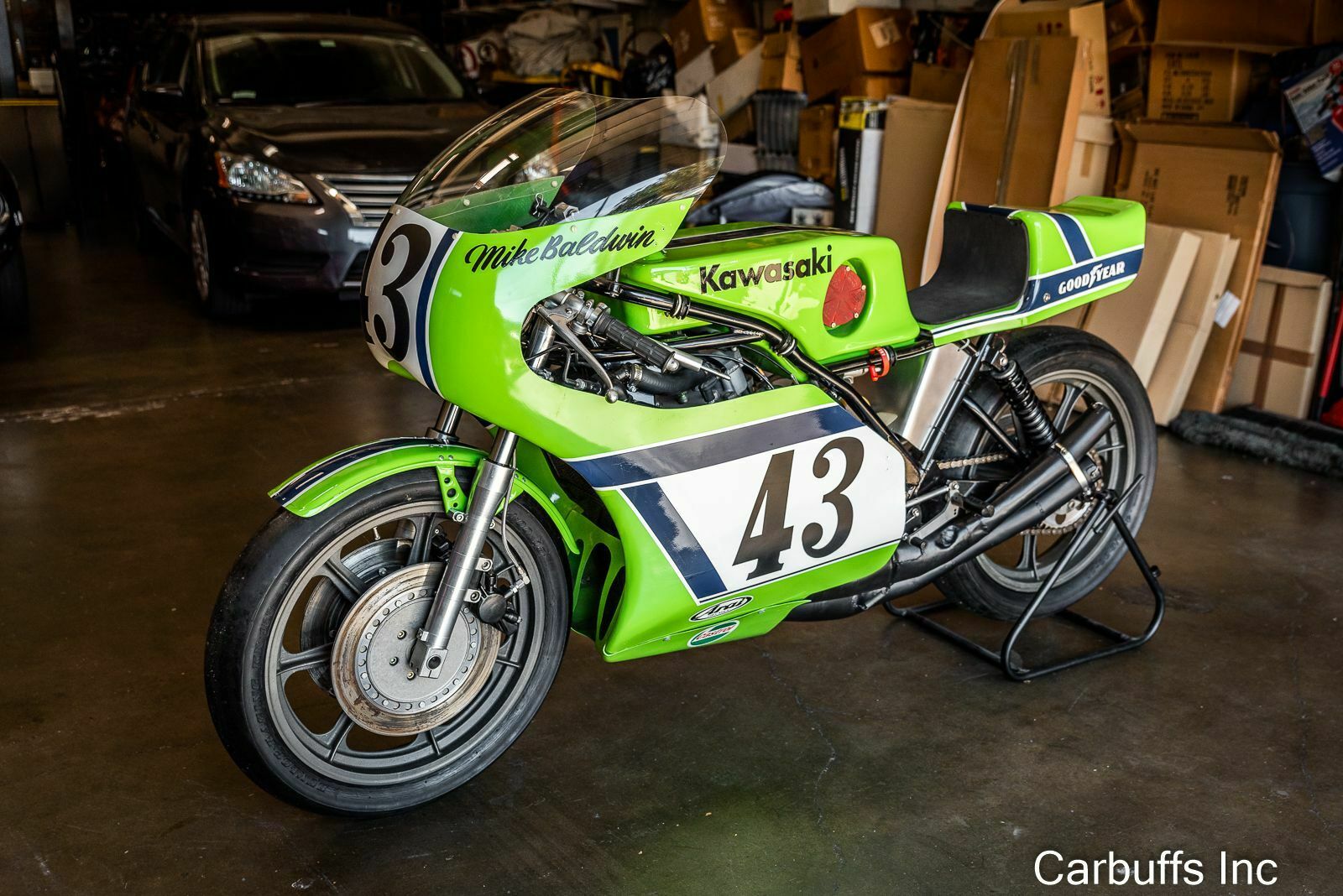 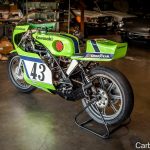 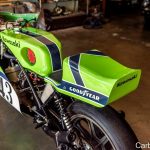 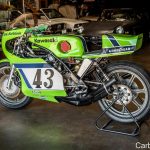 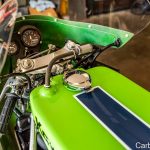 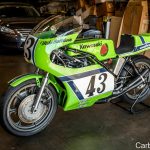 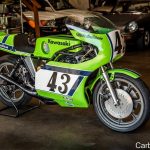 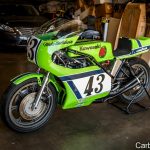 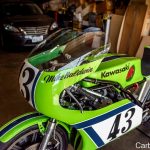 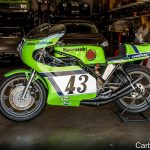