The fact that it’s offered by a SoCal preparation shop specializing in Suzuki might be a reminder that the Aprilia RS250 used the 249cc two-stroke twin from the RGV250.  As enhanced by Aprilia’s intake, top end, and exhaust, the RS250 had power that put 4-strokes with triple the displacement to shame.   This first-year race replica has low miles, excellent cosmetics except for one faux pas, and a newly rebuilt engine. 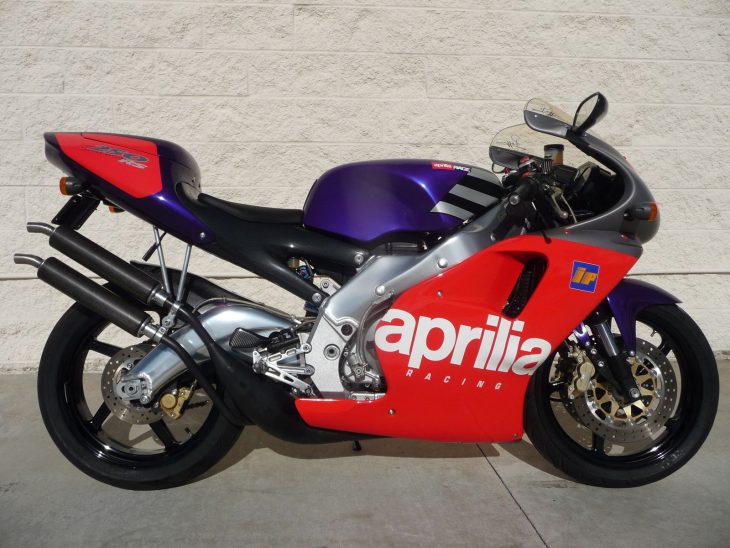 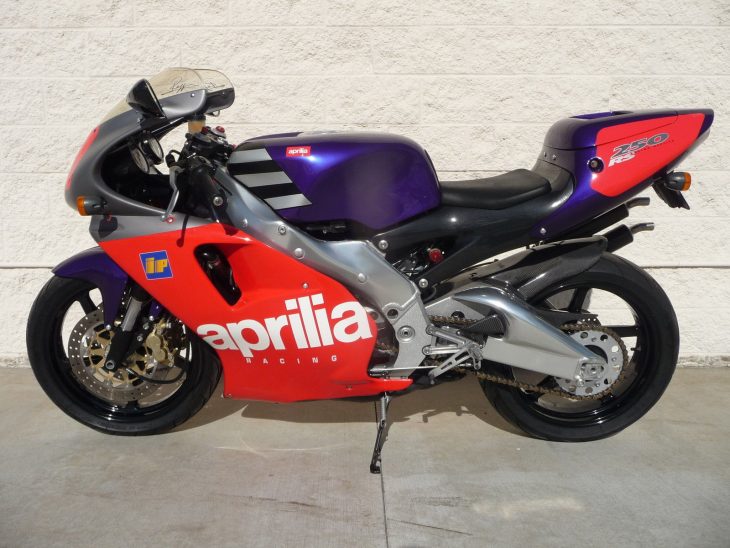 Commemorating Aprilia veteran Loris Reggiani but capitalizing on Max Biaggi’s string of MotoGP championships, the RS250 brought GP technology to the showroom floor with the sculpted aluminum-magnesium alloy frame and swingarm, and carbon fiber seat subframe.  Bigger-bike Marzocchi suspension and Brembo brakes alert you to the possible speeds.  The full fairing is sleek and completed by details like factory billet rearsets. 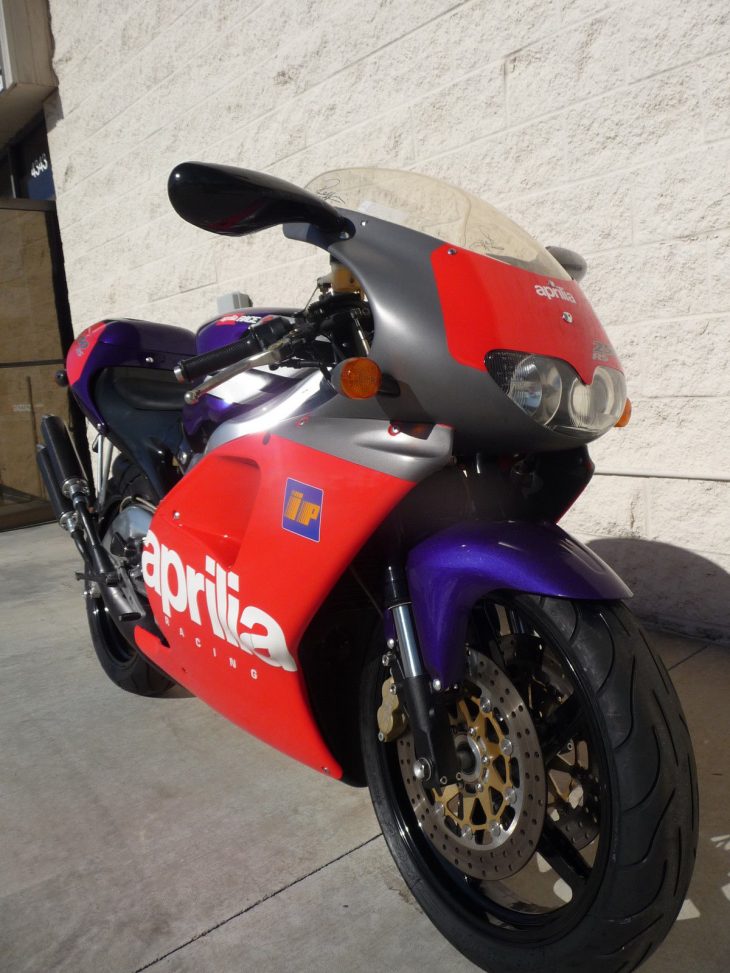 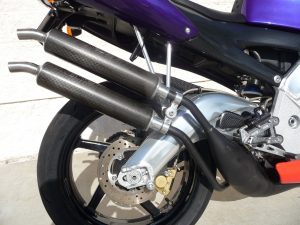 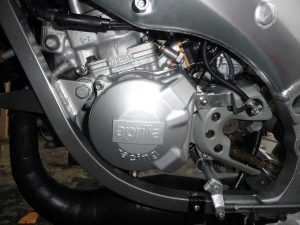 Another victim of too many bikes / too little time, this RS250 has under 6,000 miles and looks great except for the right seat fairing, which might be remedied with a decal kit.  Not sure it’s the best thing on a low mile machine, but the fresh engine rebuild will require break-in and tuning, as the owner states in the eBay auction:

But probably the BEST THING about this bike is that it just had a full rebuild – crank, carbs rebuilt, pistons (rgv) new seal kit. Easy said and done over the internet  but i have photo’s to prove.
The bike is supplied with full jollymoto pipes, but oem ones are included (seat,rear passenger brackets )
Owners books (both keys) and original loris poster with sales advertisement’s
Bike does start but will need to be run in and maybe slightly tuned once its run in. 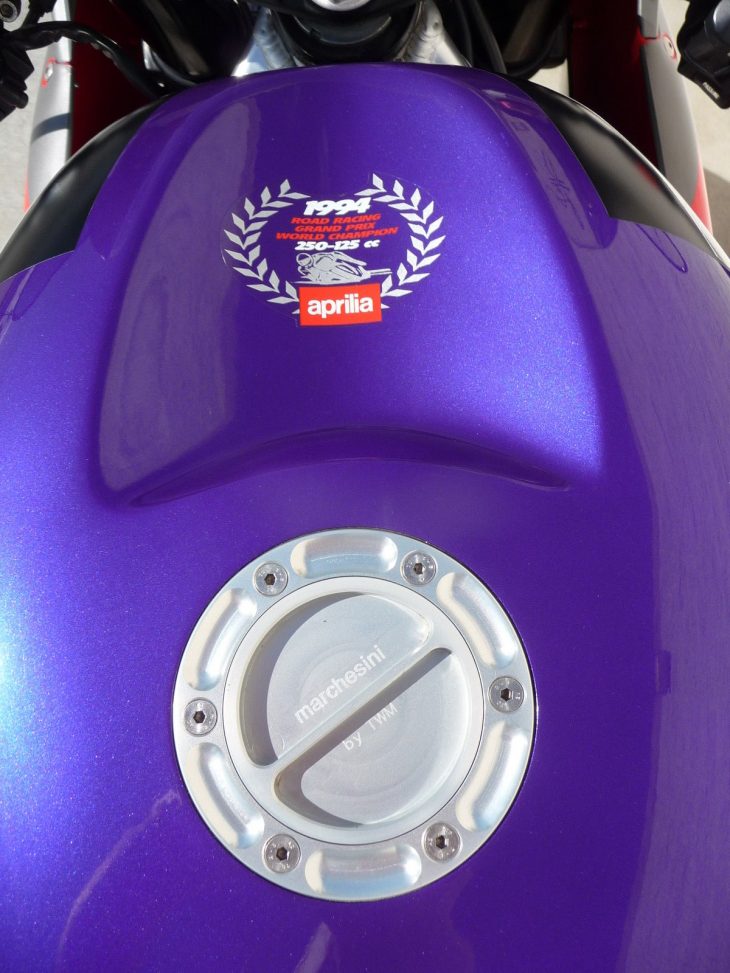 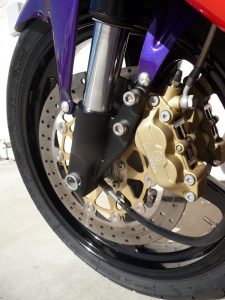 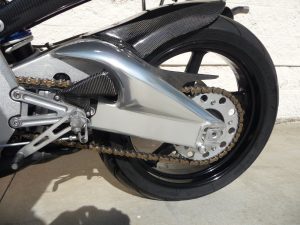 The small print for the RS250 included a powerband that doesn’t begin until 8,000 rpm, so there might be a learning curve there.  Ready to ride at 350 lbs., handling is sharp and the brakes are world-class.  Aprilia’s meticulous fabrication make the RS250, especially in the race replica, an exciting find…