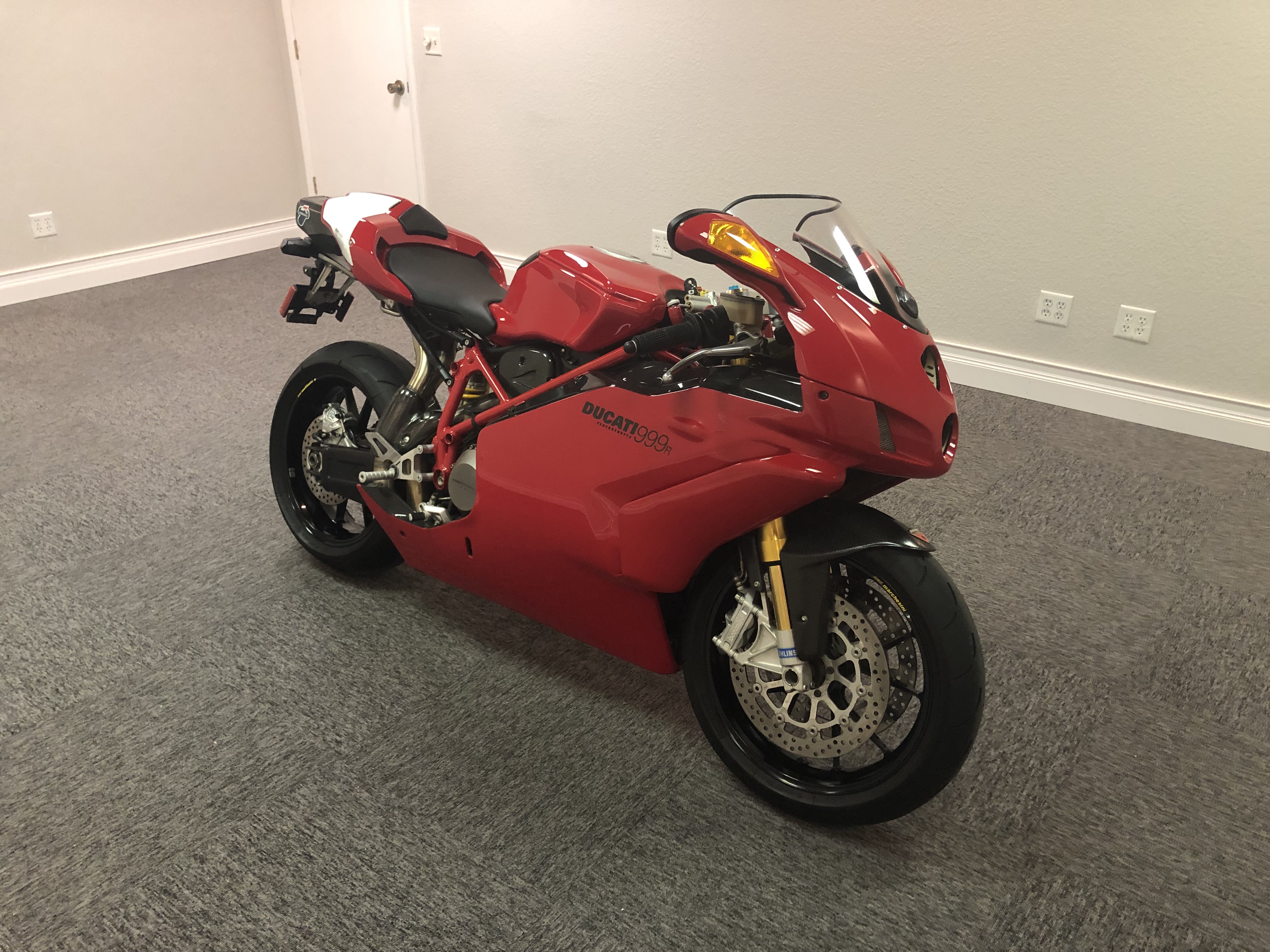 To many fans, Ducati worship occurs under the totem of Massimo Tamburini. Famed for the 916 / 996 / 998 series of mechanized obsession, Tamburini made the mold. Time proved that he was a hard act to follow, as the man to take his place – the oft derided Pierre Terblanche – forced a new design direction for both the Supersport as well as the Superbike. The 999 was a dramatic departure from the earlier series, and many of the faithful considered it U.G.L.Y. Time is a funny thing, though. And while the 999 was a gut-check to loyal Tamburini fans everywhere, today it stands out as an exceptional offering unique and beautiful in its own right. Especially if you see one in person. 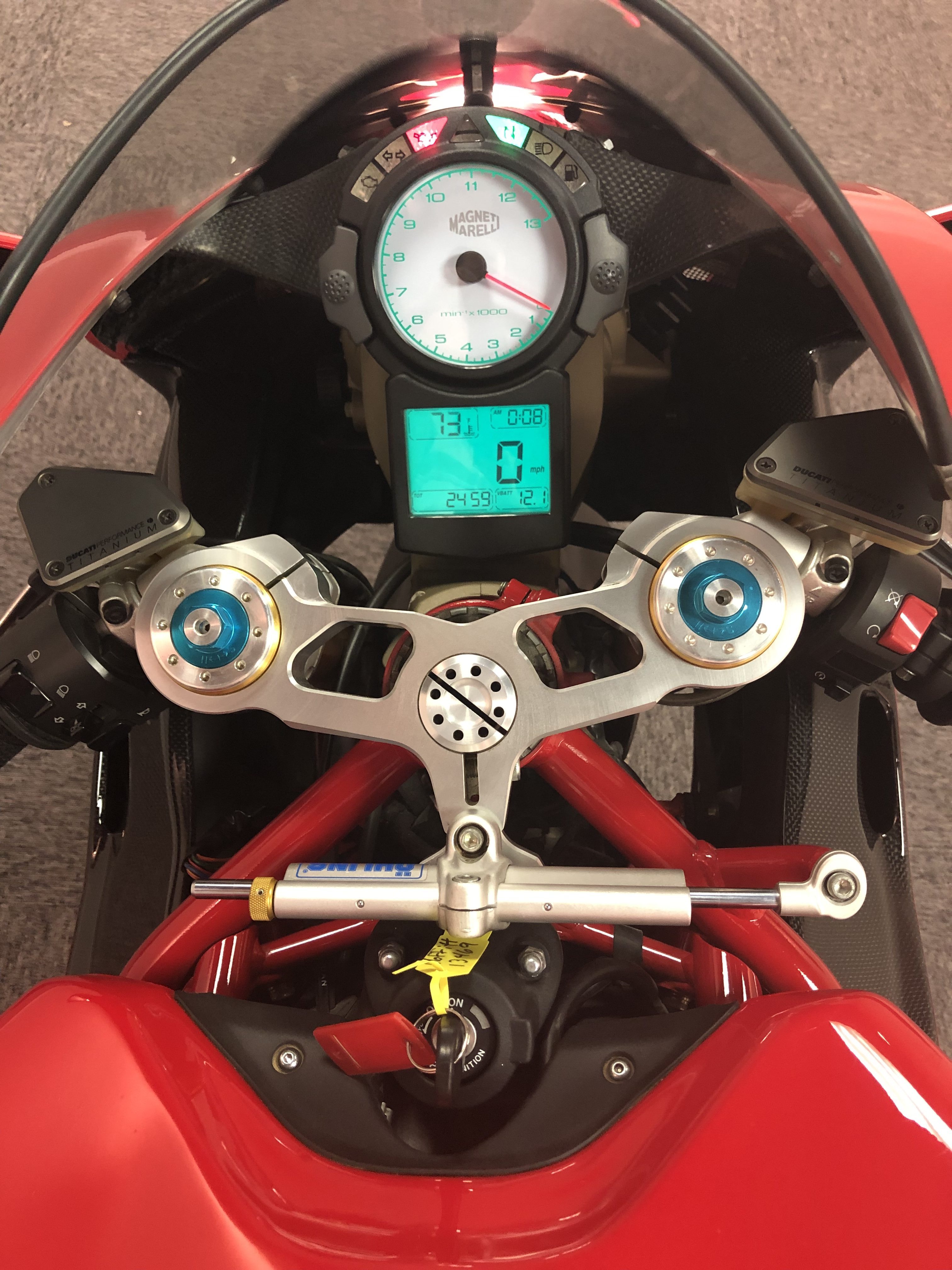 The 999 is not just another pretty face. Ducati strove to one-up the 998 in terms of overall performance – and in most ways it succeeded. Introduced in 2003 and immediately entered into competition, the Ducati 999 won the WSBK World Superbike Championships in 2003 (Neil Hodgson), 2004 (James Toseland) and 2006 (Troy Bayliss). This is an impressive track record for a brand that cuts its teeth on racing. The formula for the enhanced performance over the 998 was a simple recipe: Less weight. More power. And it wasn’t just performance that elevates the 999 from good to great – it is actually a comfortable ride as well. With adjustable handlebars, rear sets and the ability to change the relationship between the seat and tank, the 999 is a platform built to support a wider range of riders than previous Ducati Superbikes. 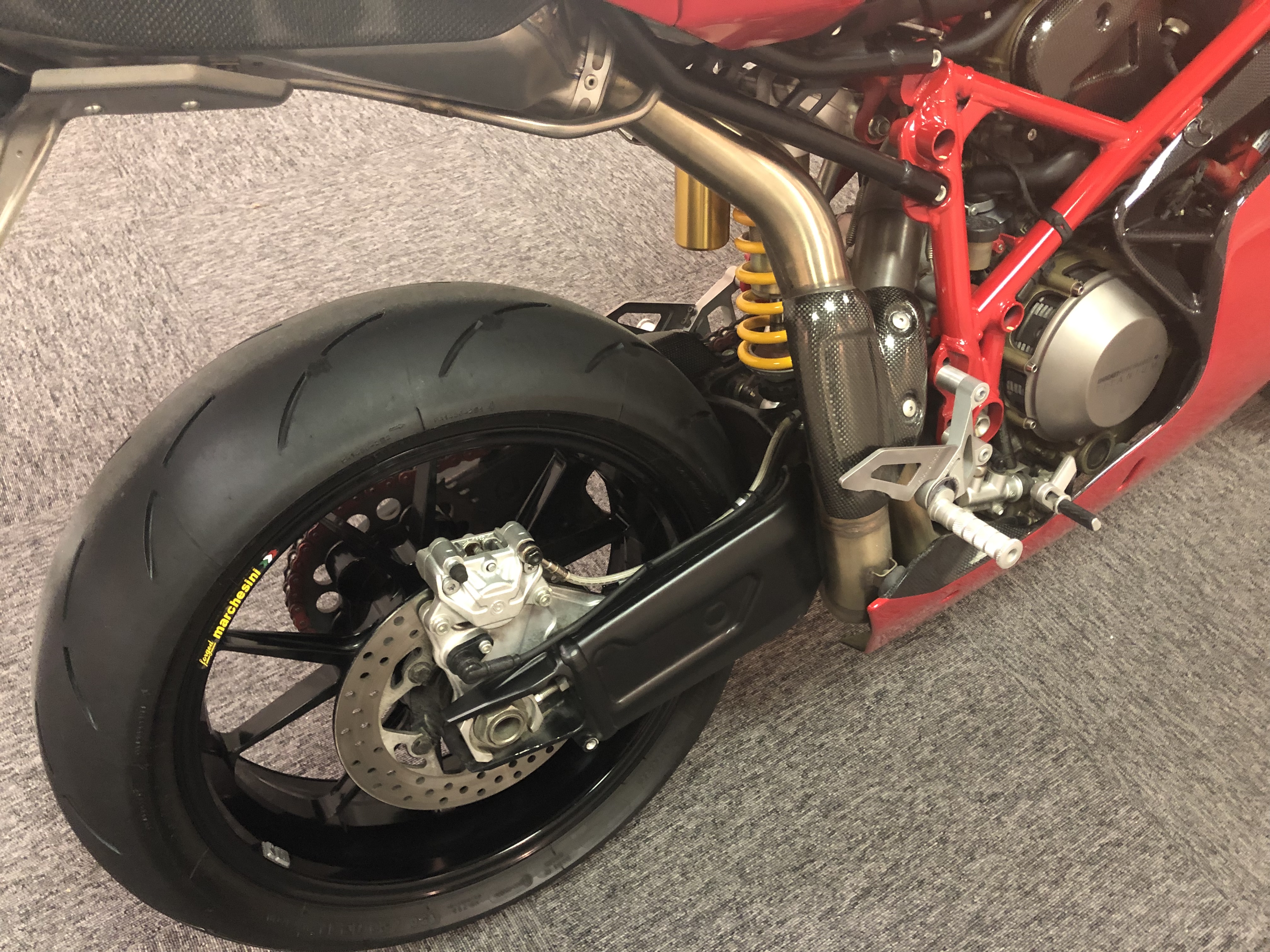 As with other Ducati Superbikes, the “R” spec of the model brings exclusivity, higher-spec components and greater performance. This is the closest you can get to a race-spec bike yet retains all of the necessary items to remain a street legal ride. And like the previous generations of R bikes, the 999R stands apart from the earlier base or S models thanks to an uprated engine. Displacing a full 999cc with an over-square bore/stroke, the 999R engine features titanium valves and rods, larger fuel injectors, and is good for an estimated 150 HP. Ohlins suspension front and rear are expected R-spec items, as are the radial-mount Brembos. The bodywork has been aerodynamically optimized for high-speed work, and is (of course) constructed in carbon fiber. There are subtle details throughout; from the strong box-section swingarm to the skeletonized triple clamps, from the centrally mounted tachometer to the integrated front turn signals. All deserve additional study. 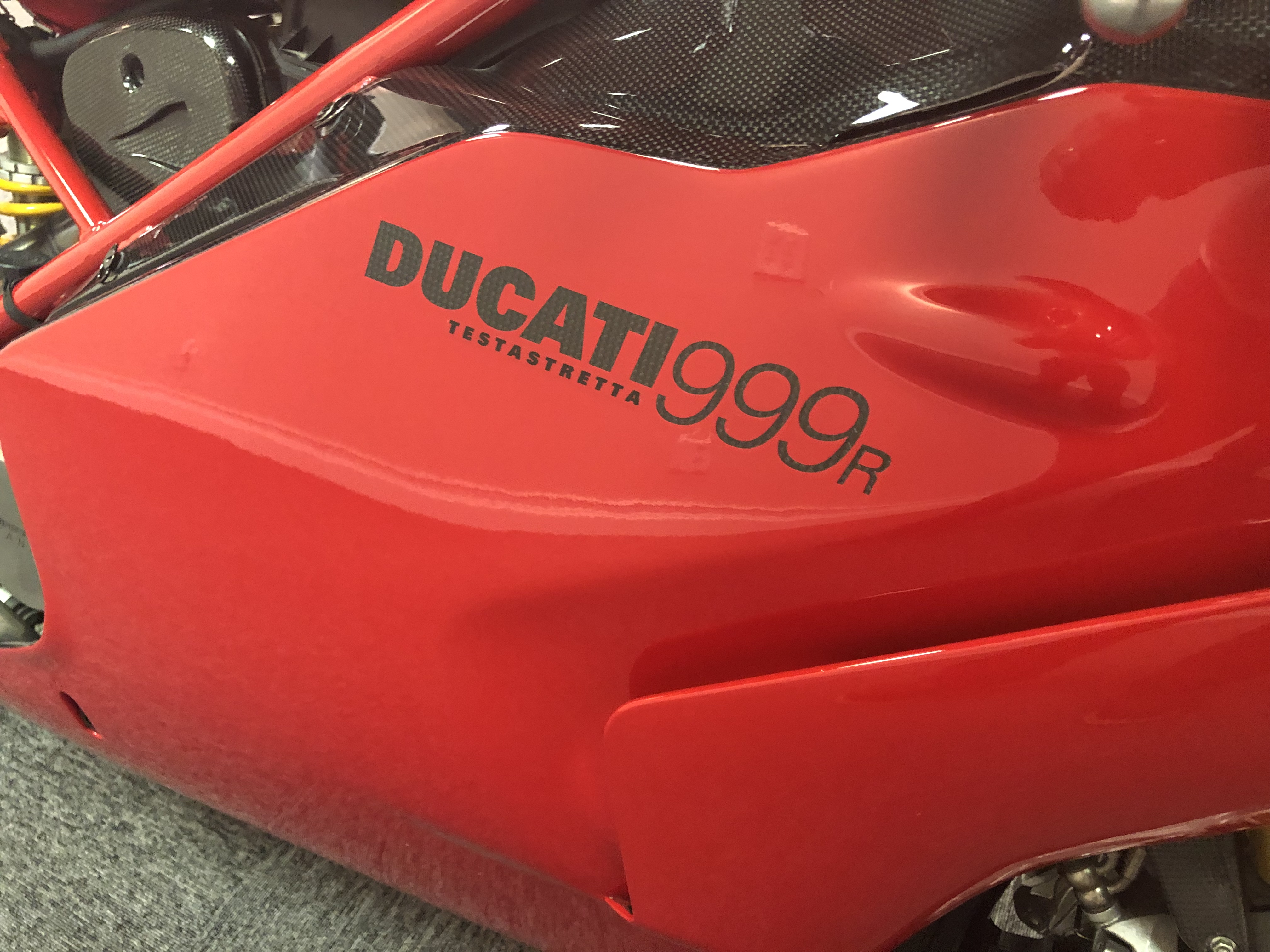 Only 200 units of this incredible R-spec Superbike were created in 2005. Each set the new owner back some $30,000. Massively capable as well as rare and expensive, the 999R was the pinnacle of what Ducati had to offer in 2005 – and was THE sporting ride of choice. Today these incredible machines stand out in a special way; mainly because the WERE different than the original 916/996/998 models, as well as the cookie-cutter 1098/1099 and MV Agusta F4 models that followed. This is a unique machine that is utterly capable of transporting you up the canyon, down the freeway or around the track (and you won’t run into yourself on every corner). The 999R has enjoyed a slow appreciation in terms of fans and value, but that won’t last long. When the world wakes up and realizes the beauty and performance available, the laws of supply and demand will catch up quickly. With only 2,500 miles, this example looks to be in excellent condition and worth a closer look. Good Luck!! 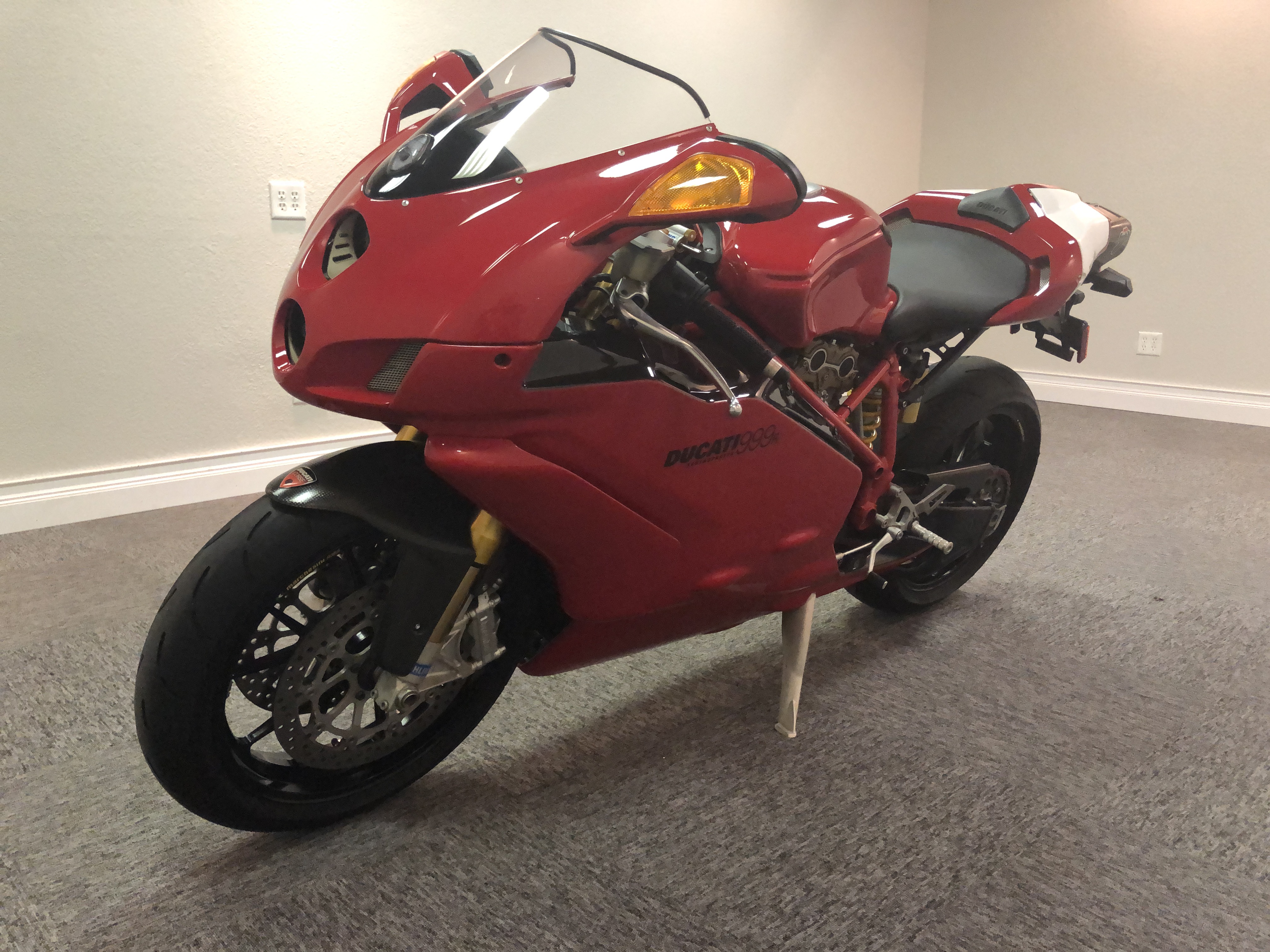 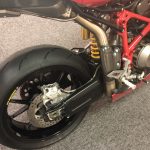 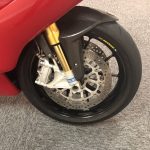 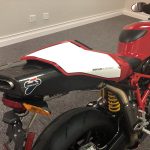 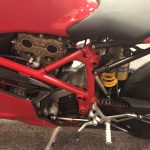 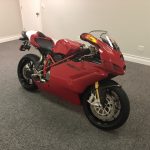 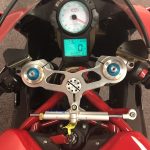