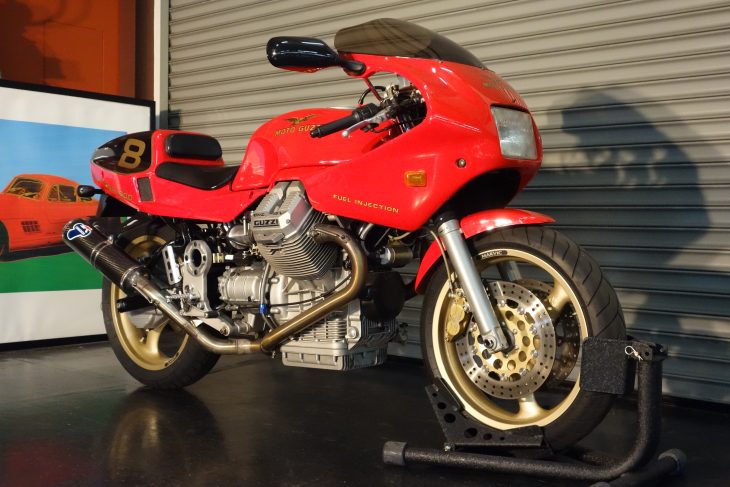 We are lucky at RSBFS to be helping to offer this gorgeous 1993 Moto Guzzi Daytona 1000 after a 15-year stay in a private collection. Though collection dwelling generally means a bike has sat long-term, this Goose shows 32,000 miles on the clock, which means it has been ridden and loved as much as it has been preserved. 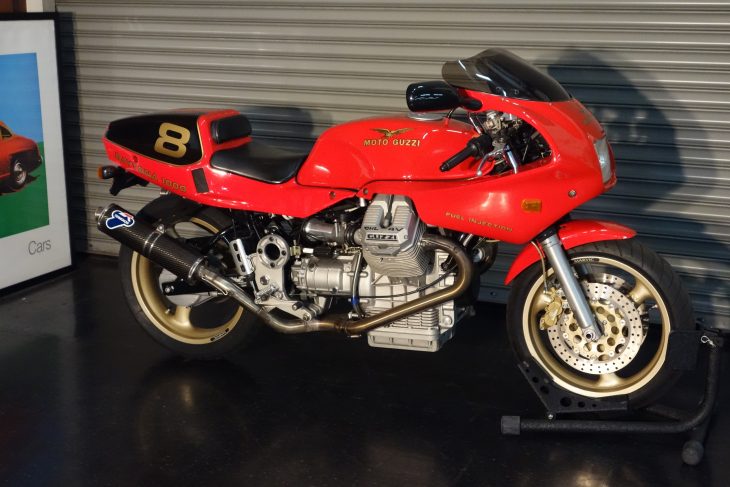 The Moto Guzzi Daytona 1000 was not really built to win races itself, but to celebrate Guzzi’s victories in a spate of endurance contests in the 1980s, and to show off the Italian firm’s ability to engineer and execute a jewel of a motorcycle from somewhat unlikely sources. The bike was designed by dentist-turned-privateer racer John Wittner, and was powered by a very tweaked version of Guzzi’s enormous longitudinal high-cam v-twin. Tweaks included bigger jugs and a longer stroke, which helped the mill push out 95 horses. 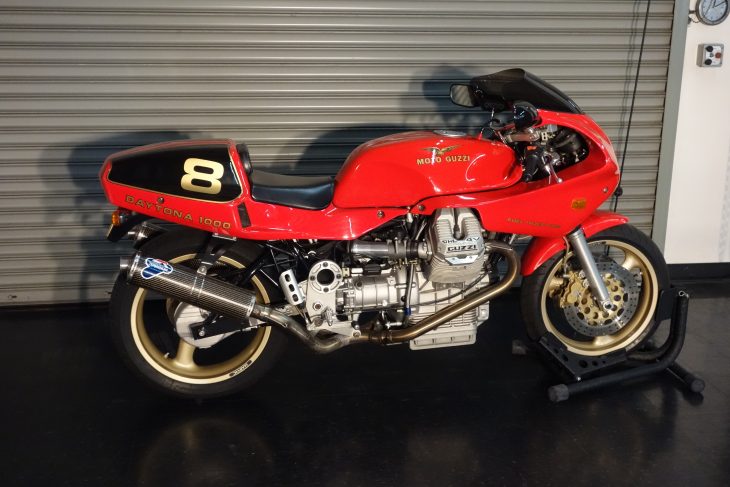 After his team of modified Moto Guzzis won the 1984 and 1985 U.S. Endurance Championship and the 1987 Pro Twins series, U.S. Moto Guzzi guru Dr. John Wittner was made an offer he couldn’t refuse. Summoned to Italy by Guzzi godfather Alejandro de Tomaso, Wittner, a former dentist turned endurance racer, was asked to help develop a new world-beating superbike. Guzzi revealed a prototype at the 1989 Milan show and named it for the famous Florida circuit (where they won the 250-mile endurance race in 1985), but in typical Italian fashion it took until late 1991 for the Daytona to go into production.
Although the hot rod Daytona engine was based around the classic “big block” air-cooled Moto Guzzi transverse V-twin, in the end it retained only the crankshaft and crankcases of the standard engine. Using the 78mm stroke of the 948cc Le Mans 1000 combined with new plated alloy cylinders with a 90mm bore, it displaced 992cc. A bright red sport fairing melded into the gas tank just above the Daytona’s all-new cylinder heads, grandly marked “OHC 4V” for overhead camshaft 4-valve. In truth, the cams were carried high in the cylinder heads, not on top, so the engine could also be considered a high-cam design overhead valve.
From the crankshaft, a reduction gear train drove a pair of toothed belts, each spinning a single camshaft in each cylinder head, which in turn opened four valves via short pushrods operating rocker shafts. Fueling was by Weber-Marelli electronic injection, and the exhaust system was in stainless steel. The engine drove a revised version of the 5-speed transmission used on most Guzzi twins through a beefed-up clutch (with 10 springs versus eight) and a driveshaft to the rear wheel.

With a claimed 95 horsepower available at 8,000rpm, the Daytona was the most powerful road-going Guzzi to date, returning a top speed of 145mph. “The result is excellent rideability, with big-time low-end and midrange power available whenever you open the throttle,” Cycle World said of the big twin in 1993. On the road, they found that being long and low in Guzzi tradition gave the Daytona reassuring stability at high speeds: “The Daytona proved unflappable, with well-damped suspension, plenty of cornering clearance, premium tires and a relatively flickable yet very stable nature.” You will not see another one anytime soon. Be different and add this thumper to your collection. This investment will only increase over time. 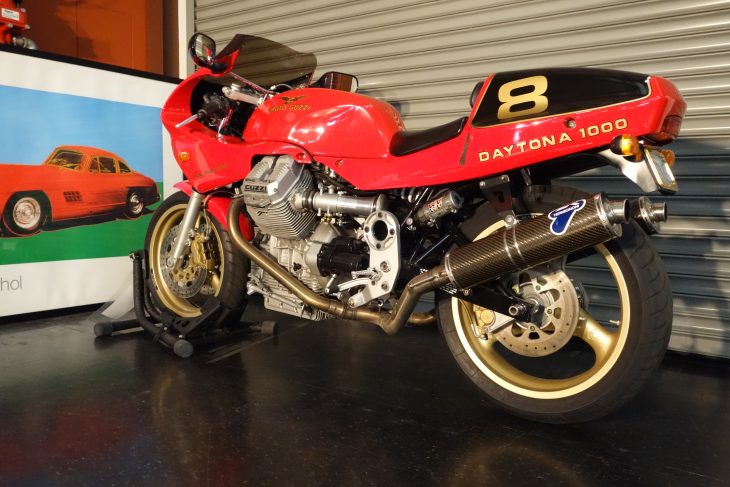 Though the performance is more than enough for mortals, the Daytona 1000’s real claim to fame is its scarcity, build quality and looks. It is a true gentleman’s road racer, made more for comfortable canyon carving than dicing at the sharp end of a club race. The previous owners of this machine clearly took that mandate to heart, given the beast the exercise it deserves. 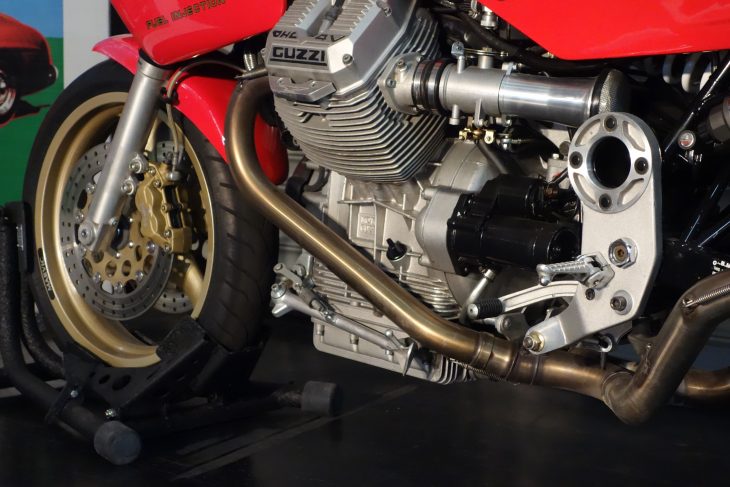 Despite its mileage, the thing looks absolutely mint, with nary a blemish, nick or streak of grime. The rear cowl wears custom livery, and the wheels have been painted gold to match the accents. That might deter the hardest-core originality freaks, but we love the look. With pedigree, acres of charm and tons of special bits, this thing is not to be missed at $14,995. Contact the seller here: sennaducati79@gmail.com 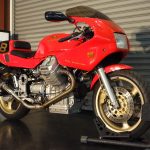 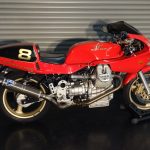 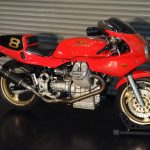 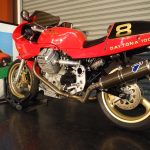 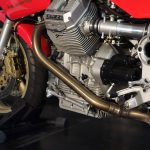 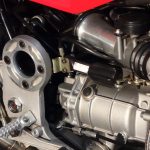