We’re on a roll here with rare Ducatis showing up on ebay. After that MH900E Mail Hailwood replica that I posted earlier, I came across this : 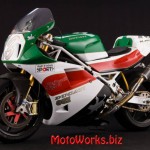 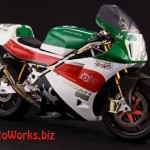 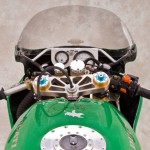 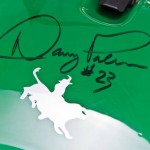 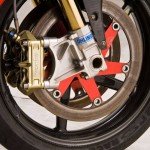 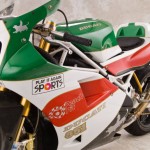 Here’s a (small) partial listing of the details:

For auction I have a Ducati 851 track bike. Ridden by an old guy on track days for the last 15 years and built and maintained buy one of the best Ducati shops on the planet this is a rare find for the lucky new owner. Built on a ex Doug Polen frame and serviced by BCM Ducati this 851 has received constant professional up keep and is fresh and ready to ride/race. These photos were just taken moments before this listing was created. This is a hand built bike with a factory racing frame, there is a salvage title for the motor from the donor bike but not for the Corsa racing frame. The motor is from a 92 street bike the frame is thought to be a 91. The 905cc big bore kit puts out 105 hp on the dyno with a mild cam to make it a very ride able bike. A very light package tipping the scales at approximately 381 pounds with half a tank of fuel. As you will find with a lot of different Ducatis the rear engine frame mounts have been welded years ago. The main frame along with the front and rear sub frames are straight but there is a small ding in the front upper frame tube from the left upper triple clamp as is common on the 851 and others. Some say this distinguishes it as frame used by #23; the signature was obtained on the Carbon Kevlar tank years later and clear coated over. The lower fairing was modified to incorporate the often mandatory liquid catch pan. To give you an idea on the investment it takes to build a bike as trick as this there is about $5000.00 in just the front end alone. Add it all up and I think you’ll agree the asking price is just a fraction of the value represented.

The 851 is already a desirable classic, and this one with a corsa frame ridden by Doug Polen makes it that much more rare and collectible.

I would jump on this one if I have the money and the garage space!