Now, before you all go waving your arms and shout: “Harley don’t make sport bikes!”, please read up on the VR1000 as listed on the AMA Motorcycle Hall of Fame website.  Or check out another VR1000 listed on here previously.

With that knowledge in hand, I present you a : 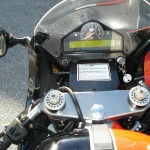 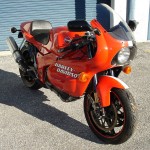 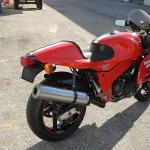 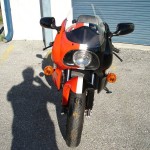 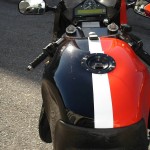 The 1994 VR 1000 was the first pure racing motorcycle Harley-Davidson ever built. Every other Harley racer, from 1915 through 1993, had been a modified production machine. The VR was purpose-built from the ground up.

Milwaukee has never been comfortable with the concept of purebred competition machines. Eighty years earlier the founders had ‘been dragged mumbling into the racing game, convinced of its necessity only after Indian had captivated the sporting enthusiasts of the 1910s and 1920s.

But once installed in the Milwaukee hierarchy, the racing department proved itself a continuing resource of team spirit and public good will. People rode their motorcycles to the races, and supported their favorite riders and manufacturers.

Harley-Davidson had maintained its support of dirt tack, the traditional American fairgrounds racing, and built a few XR 1000 production-based roadracers. But nothing on Milwaukee’s menu suited the demands of Superbike racing in the 1990s. At the upper outposts of “street bike” competition, the track-wise roadsters weigh 375 pounds (170kg) and produce 150 horsepower. Handling and braking factors are tuned to millisecond response margins. All of which is enormously expensive to achieve.

With some money in the bank, Harley decided to build its second eight-valve racer, with an American engine, chassis and brakes. Engineer Steve Scheibe headed the team, and called in experienced help from NASCAR and Indy Car racing. The project took five years and produced a double-overhead-cam, 60-degree V-twin, with 4-valve heads, Weber-USA electronic fuel injection and liquid cooling. Power went by gear to a multi-disc dry clutch and through a 5-speed transmission.

The first bikes used a Penske inverted fork and Wilwood six-piston brake calipers. The road model carries an Ohlins fork with titanium-coated stanchions. The body work is constructed of carbon fiber, and the factory listed the dry weight at 390lb (176.9kg). The production schedule was set for 50 copies of the VR 1000, the price of each listed at $49,490.

The VR first appeared on the racetrack for the Daytona Superbike race in 1994.

There were few illusions about the early chances, and teething problems were anticipated, but the motorcycle handled remarkably well. Top speed was not at the level of frontrunners, though rider Miguel Duhamel turned in good results on some of the tighter circuits. Results for the 1995 season were disappointing, and rider Doug Chandler had difficulty coming to

terms with the machine. National dirt track champion Chris Carr was also on the team and showed a quick learning curve.

Rumors circulated during the offseason that management disputes in Milwaukee cast doubts on the future of the VR 1000. The factions split as they had a half-century before; the economic rationale perceives big-league factory racing as large expense versus small return. The sporting enthusiast segment says racing pays huge dividends in public relations, and puts the company logo on television. And wins hearts and minds.

This is a great example of 1 of the 50 motorcycles built to homoligate the VR-1000 for the AMA race circuit.

Now, I am probably one of the last Harley fans on earth, but I must say the VR1000 is one special Harley that I would not mind having – and I didn’t even know that only 50 were made! Any serious collector should have one of these in their collection (0r museum)!

This is an odd post as it isn’t about a specific bike in the sale but there will be some very interesting ones available (to name just a few):

It’s worth looking at the current consignment list to see if there is something in there for you–there is everything from vintage road racers and flat trackers to Harley’s.  Remember, it’s not too late, you can always phone in a bid.  See the bid list here. See the MidAmerica Auctions, Inc. website here. 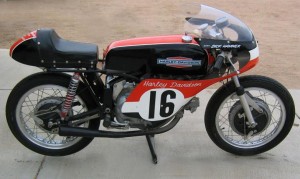 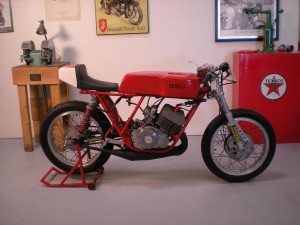 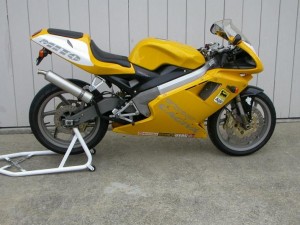 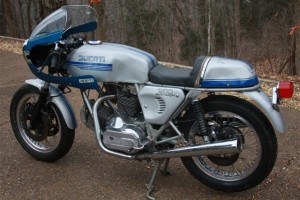 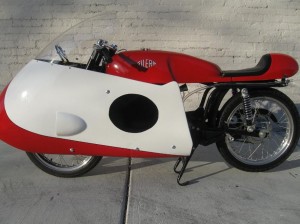 Ultra rare is the only wat to describe the VR1000 when they come up for sale. This one is located Viola, WI and has both the OEM bodywork and a set of race bodywork that is currently on the bike. The first two pictures below are of the actual bike for sale, but the last two are pictures that I found just to show how it looks with the OEM bodywork on it. I’ve had the opportunity to view a race version and a street version up close and personal and I must say that it is unique in it’s own way. I don’t think it’s any secret that these were only street legal, when sold as new, in Poland. But, I’m sure some of our viewers could get it titled and tagged for street use in the states 😉

You may recall a few months back I posted a Pascall Picotte VR1000 Full Factory Racer that was for sale at Picottoe Motorsports. It was listed for sale at $50,000.00 and didn’t sell on ebay. So for me it raises the question of which is more rare? A Factory VR racer or a Factory street goer? Now, #20 is not all stock and that is being disclosed by the owner/seller. S&S has done extensive engine work and it has been ran in the Salt Flats. So what do you think? Is a VR Factory racer more or less valuable than a bone stock VR? 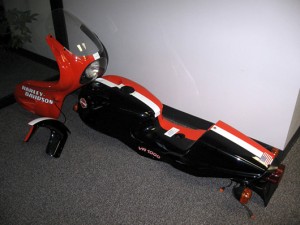 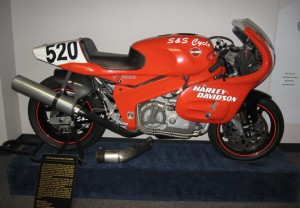 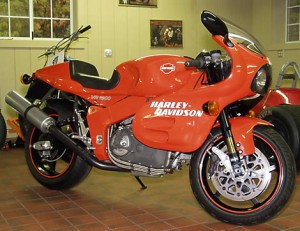 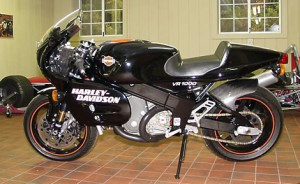 In 1994, Harley-Davidson returned to the top level of professional road racing with the VR 1000 Superbike Race Team. Despite memorable performances during its eight-year run, including a pole position in 1996 and podium finishes by Pascal Picotte in 1999, Harley-Davidson concluded in 2001 that the VR 1000 was at the end of its development cycle and was no longer competitive in the AMA Superbike series. While the program was ended following the 2001 season, the VR 1000 Superbike racing program helped Harley-Davidson develop and refine technologies such as liquid-cooling and electronic fuel injection. The program also led to the development Harley-Davidson’s first production liquid-cooled motorcycle, the 2002 VRSCA V-Rod.

The H-D PR makes it sound a little better perhaps than it actually was for the race team in my opinion. Some of the last memories I have of it on the race track is Scott Russell leaning it against the gaurd rail, sitting down and watching the rest of the race as if that’s what was expected to happen. It seemed as if no matter who was recruited to to help the effort it didn’t help the reliability and speed of the bike. I personally was very excited to see H-D competing in the AMA and wanted them to suceed. But, we all know the result. However, we still have the VR1000 which will live on to be looked at and discussed for many years to come.

This particular VR1000 was purchased by S&S Cycle to get an idea of where H-D might be going in the future. The bike and engine were all new, aluminum perimeter frame, top of the line suspension and lots of exotic light weight components. The engine was impressive, 60 degree V-twin, liquid cooling, 4 valve head, overhead cam shafts, and fuel injection. S&S worked for a couple years on the VR1000 expecting to see a version hit production or at least see it become street legal in the US. Power and torque were raised dramatically over the stock bike, special pistons, cams, head work, intake, and a high output exhaust were the majority of the improvements. In 1995 S&S took the VR out to the Bonneville Salt Flats. The bike was tall with a short wheelbase, perfect for road racing, but at Bonneville, not so good. At top speed on the salt the VR would just spin its rear tire. The upgrades did prove to be reliable and much faster than stock, it ran 166 mph on salt, not bad.

Bike is said to be in excellent condition and ready to fire. I’ve never seen one of these on the road and don’t really expect to, but think of the conversations you would have at your local Bike Night.