The spiritual successor to the famed Ducati 916/748 series, the MV Agusta F4 burst onto the scene with instant credibility; legendary designer Massimo Tamburini penned them both. The Ducati influence is unmistakable in many aspects of the F4 design, but the chassis and engine development is all MV Agusta. Working in conjunction with Ferrari engineers, the MV Agusta team (under the Cagiva banner at the time) developed a radial valve head to help boost performance of the intended 750cc inline four cylinder powerplant. So what does a beloved Formula 1 race car driver have to do with motorcycles? It just so happened that Claudio Castiglioni – then President of Cagiva (which was the parent company of both MV Agusta and Ducati) – was a close personal friend of Ayrton Senna. Senna was a hero in his home country of Brazil, and off the track spent vast sums of money and significant time trying to help the underpriviledged children of his homeland. The Senna Foundation was created by the driver for this express purpose, and after his death in 1994 Claudio created both Ducati and MV Agusta “Senna” editions to benefit the Senna Foundation. So what makes a Senna Edition different than a normal F4 750? Aside from the distinct color scheme and branding, the Senna shared the basic chassis, engine and transmission from the other Evo 2 series bikes. The redline was raised slightly to 13,900, giving the Senna a higher top speed. The suspension was upgraded, the wheels were distinct, and the bodywork was formed in carbon fiber. 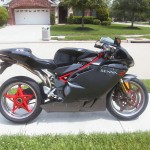 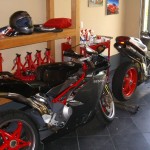 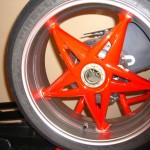 RSBFS has featured a few of these Senna branded beauties over the last couple of years (you can check out #172 HERE, #175 HERE and #184 HERE. Give us some time; I’m sure RSBFS will eventually post each of the 300 examples as they come up for sale!

The auction for #196 is on right now, and bidding has been moderate. The latest bid was up to $7,299.55 as of the time of this writing, with reserve still in place. These bikes have all gone above $15k in the past, and I would venture a guess that this one belongs up there as well. For more information and pictures, click the link and jump over to the auction. Good luck, and don’t forget to tell ’em you found it on RSBFS!