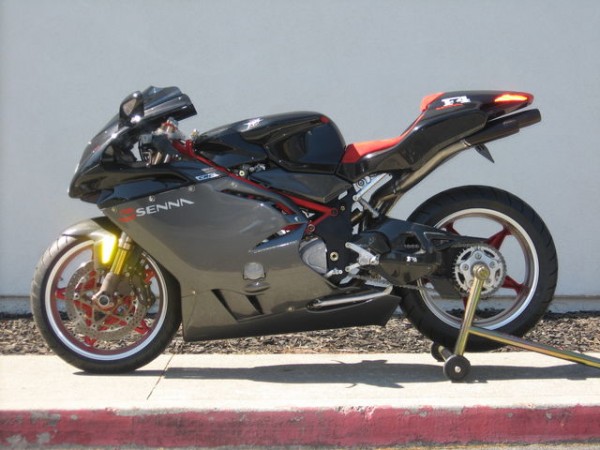 Most reading this know that the original 750 F4 was designed by Tamburini and sported a motor designed in association with Ferrari utilizing radial valves. While no one can argue with the styling, the motor fell short of benchmarks set during the period by the GSX-R750. Wikipedia notes that the Senna adds the 136 hp (101 kW) engine of the Evo 02 but with a higher redline of 13900 rpm, and top speed estimated at 175 mph (282 km/h) @ 12750 rpm . The Senna also had some suspension upgrades and some carbon fiber bodywork. 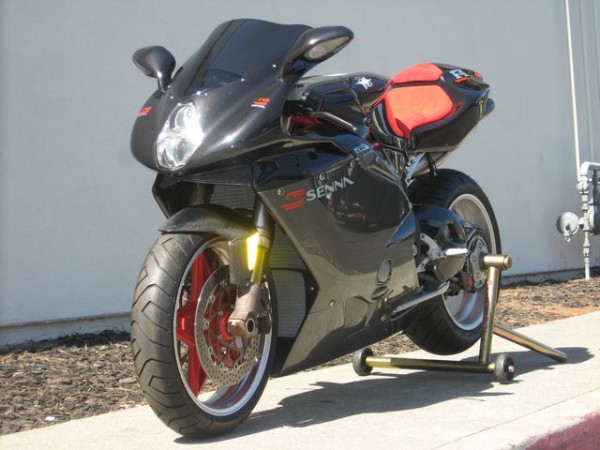 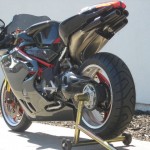 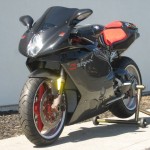 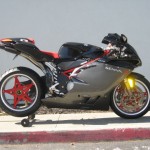 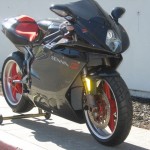 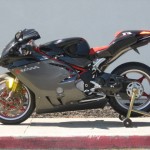 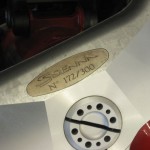 In celebration of the release of the new film Senna, we have up for auction an immaculate 2002 MV Agusta F4 Senna 750 #172 of 300. This motorcycle is in showroom condition with only 350 miles!

Take one Claudio Castiglioni, President of MV Agusta and close personal friend of Ayrton Senna (regarded by many as the finest Formula 1 driver of the modern era), add noted designer Massimo Tamburini to the mix (you might remember him as the guy that created the Ducati 916), stir in a Ferrari designed in-line four cylinder engine, wrap it up in carbon fiber bodywork and perch the whole package on stunning composite alloy wheels. This, my friends, is the numbered and rare MV Agusta F4 750 Senna Edition.

When the Senna Edition was released in 2002, it retailed for $24,995. All 300 bikes were sold with the proceeds going directly to the Instituto Ayrton Senna – a charity benefitting Brazillian children – set up after the racer’s death. Sharp looks with performance and handling to match, the MV F4 continues to be a desirable motorcycle. These limited edition models only enhance the value of the bike.

This bike has the Arrow Race Exhaust installed and power commander with custom mapping.

NOTE; this motorcycle is not California legal so California buyers will need to make alternative arrangements for registration.

The bolded section above was lifted from the entry noted above that Mike wrote on #175. Imitation (or basic copy and paste) is the sincerest form of flattery I suppose 🙂

Currently bidding is stalled at just shy of $12k with 2 days to go as of Sunday afternoon. Surely this and #175 are worth more than that. The only other examples I could find online were priced north of $15k, including this one Doug posted in January of 2010 for $16900. Good luck to both sellers!