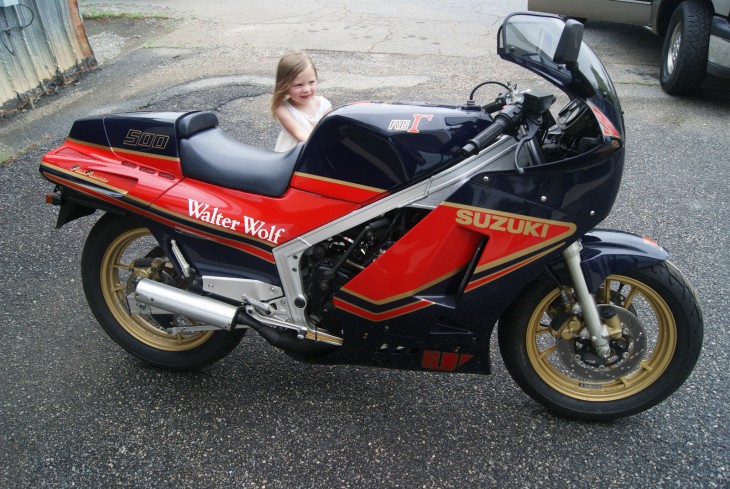 Race-replicas are generally garish affairs: race bike paint is intended to offer up a striking rolling billboard that differentiates the machine on track and gets attention for sponsors. But the Suzuki RG500 Walter Wolf replica offers up subtle but effective style that’s very unusual among race-reps. Maybe that’s because Walter Wolf never actually sponsored racing motorcycles… Although named like a Bond Villain, Walter Wolf was actually an Austrian-born, Canadian oil-industry success that sponsored a Formula 1 team in the 1970s. 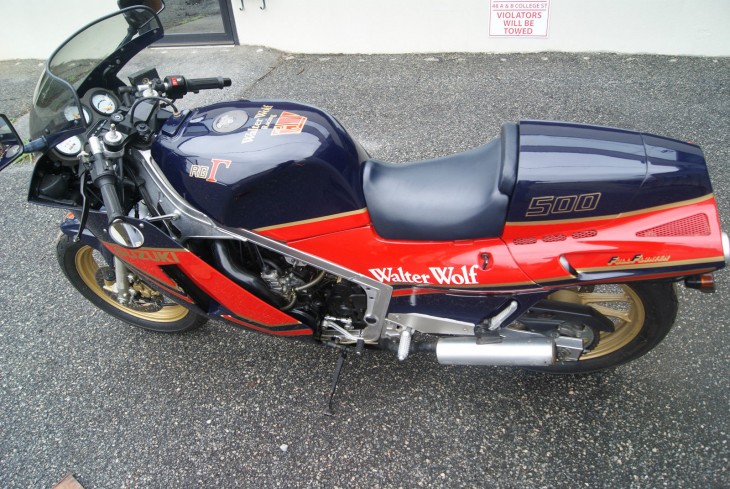 The RG500 was fitted with an exotic, race-inspired powerplant, a water-cooled “square” four with a pair of cranshafts that was shared with no other production motorcycle. Dry weight was under 400lbs and, with 100 crankshaft horsepower, the RG offered up a roadgoing Moto GP experience unavailable anywhere else. 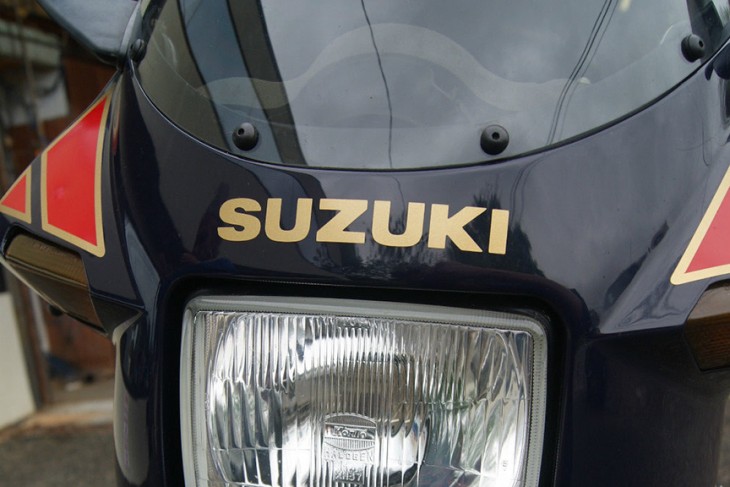 The seller mentions that he’s also owned Yamaha’s RD/RZ500 but considers the Gamma to be a “far better performer.” While on paper the two were very evenly matched, in practice the Gamma was edgier, sportier. In what likely seemed like a good idea at the time, Yamaha pitched their two-stroke V4 for the street, fitting a balance shaft that gave the bike a far more refined feel. But Suzuki’s RG500 managed to more closely replicate the racebike feel buyers were looking for, and is generally far more sought-after today. The Yammie certainly has it’s devotees and is a very desirable motorcycle, but reviewers are pretty clear: the Gamma is where it’s at for speed and thrills. I’m selling my 1986 Suzuki RG 500 Walter Wolf. If you are not familiar with this bike, read below.

The RG500 Walter Wolf  was a very limited, very distinctive edition of the 500cc Suzuki machine that has won seven championships in world class Gran Prix racing. That racing heritage continued in 1986 with the Walter Wolf sponsored RG500 winning the Canadian National Pro and American Production Championships. The full power Walter Wolf RG500 Gamma of which on 99 were produced, were only exported to Canada. No one (including the Japanese domestic market) was to receive the real deal 95 HP Wolf. The Canadian bikes did not have the WW logo on the gauges nor the WW key. Of the 99 production Canada WW’s a surprising number went to Mexico where Walter Wolf was a big name in F1 auto racing circles.

I bought my WW from the original owner in 2001. He was a Suzuki dealer in Long Island New York. He used his connections to get the bike delivered to his dealership, and had it registered and titled in New York State. When he sold it to me he included a  Walter Wolf key blank, lots of magazines articles about the Suzuki Gamma. He also included a scale model “kit” that is in the original box, as well as “odds and ends”.

Included in the “odds and ends” is misc hardware turn signal lenses and “blanks”… and a fairing retro-fit from Suzuki Japan. I have the original owners manual and the factory shop manual. I also have a MPH speedometer. I believe I have the “proper” front and rear turn signals as well.

I have the 2-up seat.
I have the factory lift stand with the GAMMA Logo.
I also have a complete set of micro-fiche..
I have the original factory tool kit.
When he sold it to me he also gave me the original shipping container… which I (sadly) threw away.

Just before he sold the bike to me he had a “low side”. I had it repaired and refinished by Sean Lezotte of CCR. The color match is perfect. One of the canisters was “scuffed”. I have some cans of the proper blue paint.

I installed new tires (Avon’s). I had a gear dog break off… which I replaced.

I moved to Georgia in 2007 and titled the bike in Georgia (clean). In 2010 I had the bike “looked over” by one of the famous “Gamma Gurus” who gave it a clean bill of health.

After his work and assessment I rode the bike for about 100 miles. I then parked it in a climate controlled garage..

That is the entire history of the bike except the issue of mileage. When I bought the bike it had a MPH speedometer on it that the previous owner said was necessary to pass NY inspection. The last “mechanic” to work on the bike replaced my MPH speedometer with my KPH speedometer… for unknown reasons. I would say the MPH speedometer number is correct. I have BOTH speedometers.

I am a motorcycle enthusiast. I have owned many high performance motorcycles over the past 30-35 years including RZ 500’s,  Nortons, Triumphs, Rickmans and other iconic street bikes.

This is a fine example of a really high performance motorcycle. Riding one of these V-4 Two Strokes is quite fun. Having owned the RZ and the RG, I thought both were incredible..but the Suzuki was a better performer.

My pictures are not arranged in any particular order….and look horrible. I am no photographer.

I hope to get a fair price from an enthusiast. 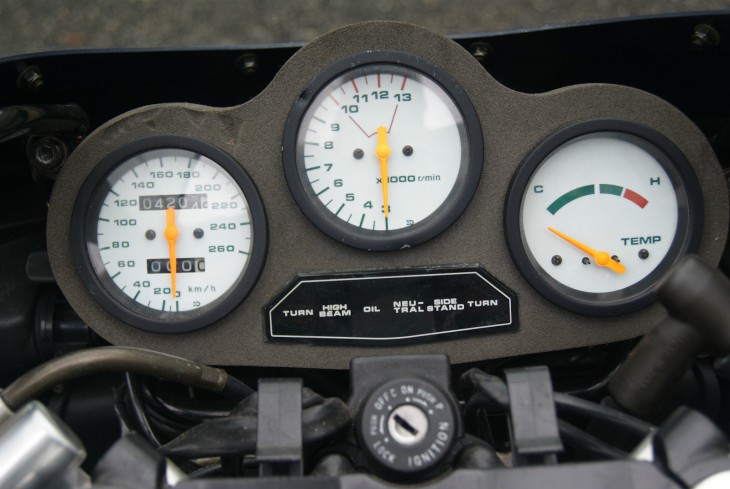 Well that seems fair. And given the interest a regular Gamma generates, I don’t think he’ll have too much trouble drumming up the interest he wants. Mileage isn’t super-low at 12,000 but it certainly is in super condition otherwise. The bike looks beautiful and is claimed to run well, but will the fact that the bike lacks the iconic “WW” logo gauges deter the purists?

Time and the comments section will tell. 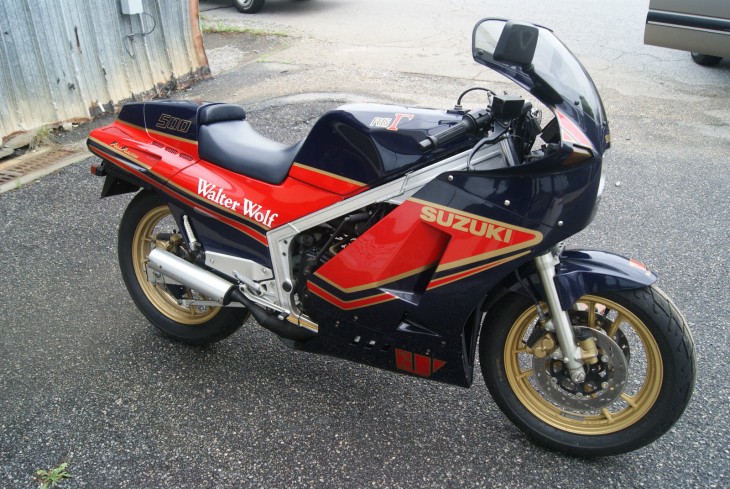