We seemed to have passed through the winter doldrums here at RSBFS and bits of unobtanium are starting to appear for sale again. Here are a pair of Ducati Desmosedici/D16RR team versions for sale on ebay, with the first being a relist from this time last year and the second a new listing located in France.

The Desmosedici was offered as a limited production road-legal version of the Ducati MotoGP racebike but unlike a lot of Ducati limited editions, was a lot more than just a re-skinned standard bike.  The Desmo was and remains one of the very few true MotoGp replicas built for the street.  Sixteen desmodromic actuated valves  (hence the D16RR designation) and gear driven cams were built into a 989cc V4 that went to a nearly 14,000 rpm redline and produced 200 hp.  All the power was wrapped up in a chrome-moly steel frame and encased with a carbon/plastic blend bodywork and handled via a 43mm upside-down forks with remote reservoir and a 4-2-1 underseat exhaust in titanium.  In a sign of its true nature, the Desmo came with both street and racing exhaust kits.

The Desmo was originally planned to only be built as a small production run but demand was so robust that the production run expanded and almost 1,500 Desmosedici’s were made available worldwide for public purchase.  Being priced at an eye-popping 72,500 USD didn’t make a dent in the demand for this bit of motogp derived unobtanium; all 1500 units were pre-sold despite the fact that the bike went on sale in 2008 in the early days of the financial crisis.

The first one – Ducati Desmosedici in California (45k USD) 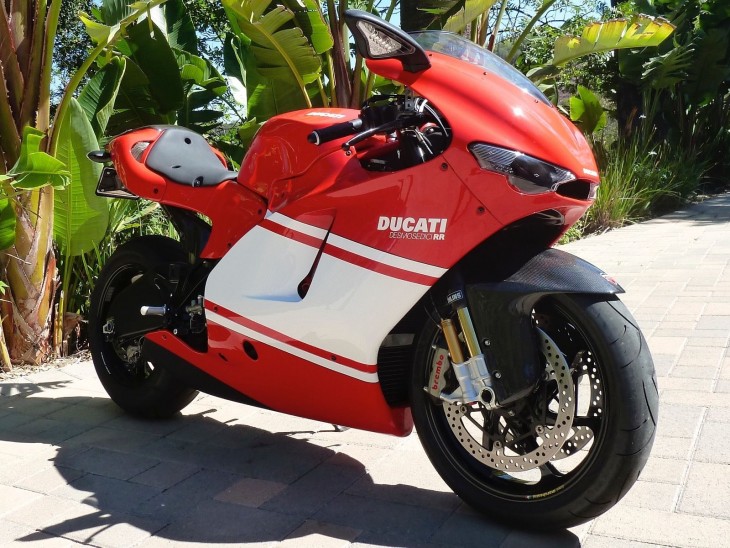 The first one is a relist from a previous post here on RSBFS from a year ago (time flies almost as fast as this bike!).   Based on the feedback count from the previous listing, the seller looks to either someone who isnt that active on ebay or a dealer.

Mileage is listed as 3,300 (miles?) but no detailed service info is provided. 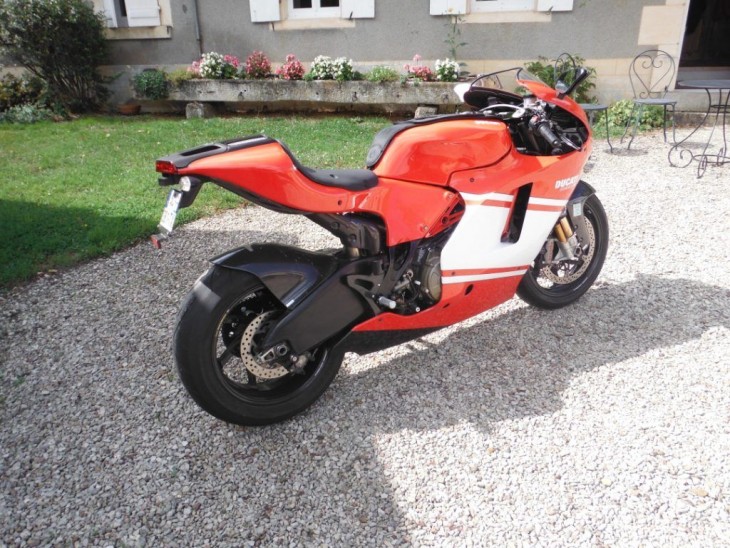 Here is the second one that is located in France.  According to the seller its one of the later production numbers and a lot of collectors say the later versions avoided some teething problems.

The info on this one is a little more detailed than the one in California.  Here is what the seller has to say; Now for the big question; what is the current value of a 2008 Ducati Desmo/DR16?   Well the difference in opening bid price between these two is pretty big (10k USD) and recent examples have been sold here in the states for the lower number so at first the one in France seems a bit overpriced.  However a bit more research indicates that the lower price is more inline with a lightly used example that is perhaps missing a few pieces such as the decals or one of the OEM exhaust sets.  The upper price seems to be inline with pristine/nearly new editions that come with all the extras that were included with the purchase of desmo so perhaps the prices for each of these are right in line.