Rare though they are, the 1986-88 Paso 750’s have their loyal fans, and there have been a half-dozen blue examples profiled on RSBFS.  This one hasn’t but a half an oil change’s worth of miles, and has been beautifully stored and cared for since its return to duty. Design legend Massimo Tamburini’s first Ducati was the Paso, where he proposed a square-tube chassis enveloped by the soap bar.  Other innovations on board included the belt-driven cams on the 748cc twin, with a single Weber carburetor servicing both cylinders from between them.  A rather forward weight bias steers easily on the 16-inch front radial tire, and the 42mm Marzocchi fork was robust at the time.  Mid-sized 280mm brakes, 5-speed transmission and long alloy swingarm complete the running gear.  Even with its opaque windscreen, the very full fairing provides a generous pocket for the rider. The seller took a leap of faith several years ago, and went for a NOS twenty-five year old.  No word on how the re-commissioning went or what’s been needed since then.  The condition is hard to believe, in a good way.  Likely the cam belts are again due, but also factor the unobtanium exhaust and slick tail-light mod into the equation.  From the eBay auction:

When I bought the bike it had 154 miles on it and it was 25 years old. A brand new, unrestored antique made in limited numbers and even more rare, it’s blue.

Now the bike has 1,538 miles on it and it’s 32 years old, in like new condition.
I bought the new Conti slip-ons out of Australia. These are hard to find. The original exhaust to be included. I removed the old saggy rear blinkers and incorporated the signals into the tail light as was done on models sold in Europe. The only non-factory part is the ring on the tank that the fuel cap installs into. This was made by by hand at Ducati Austin as a replacement. 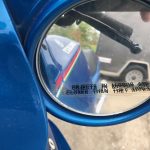 Before being assigned the Paso, Tamburini had already come and gone from Bimota, and joined Cagiva ( who had just acquired control of Ducati ).  Though it was great on a more open road and handled better than the 904cc models, even when tuned right the Weber was temperature sensitive and made the Paso 750 a finicky commuter.  Either way it never really caught on, and they’re rare without any special editions.  The buy-it-now seems realistic in light of the season and a downright bargain for an afficionado.