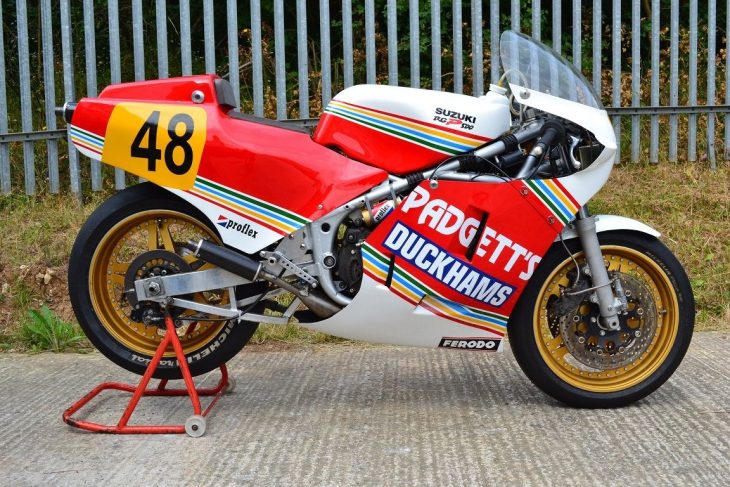 The road-going two-stroke fours from Suzuki and Yamaha normally tend to look a little awkward to my eye. The wheels and tires look too skinny, the brakes too small, the fairing bulbous and a little ungraceful. That all goes out the window with this 1988 Suzuki RG500Γ race bike, which seems better balanced all-around, and does away with pointless frippery like headlights, turn-signals, and rear-view mirrors… Motivated by a liquid-cooled square-four engine that was basically made up of a pair of parallel-twins geared together, the Suzuki was far more raw than the competing RZ500 from Yamaha. Many two-strokes of the period featured complicated technology designed to make them more practical for road use. While the RG500 had some of those as well, it seemed to revel in the very qualities that attract two-stroke fans, instead of masking them: light weight, narrow powerbands, and a generally unruly, experts-only handling. Power hovered right around 100hp for the road bike and, for a bike of the period that weighed under 400lbs, this represented state-of-the-art motorcycle performance. Even today, these are some of the most highly sought-after bikes of the 1980s and, although they don’t offer cutting-edge power compared to modern machines, the level of involvement required to ride one quickly and the highly-strung, chainsaw-maniac shriek of the engine mean plenty of entertainment, all wreathed in heavy two-stroke smoke that drips from the four stingers. 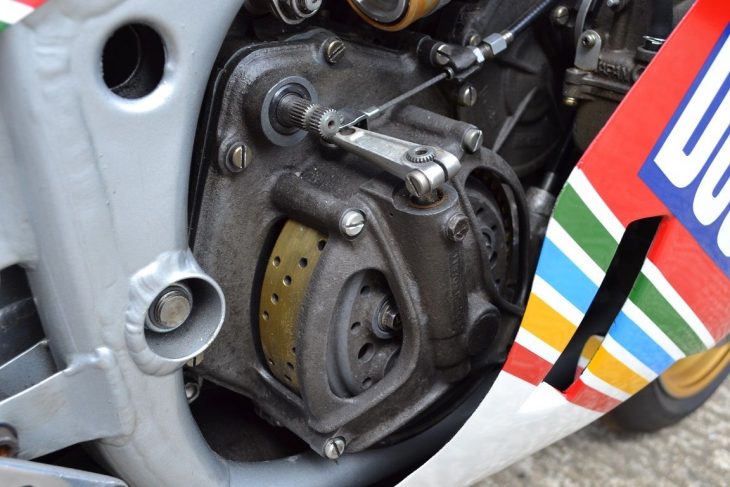 This example is a pure racing machine that obviously doesn’t even share a frame with the roadgoing model, and competed in the late 1980s in the UK, as described by the seller.

For the 1985 season Suzuki adopted a new approach in respect to their hugely successful RG500 partly in response to changes being seen in domestic racing. National championships were moving towards production based, four stroke formulas resulting in less demand for over the counter Grand Prix 500’s. Suzuki opted to stop producing complete RG500’s, instead supplying Padgett’s of Batley with up rated, magnesium cased, stepped RG500 engines and their associated power valves and expansion chambers. Padgett’s would then supply complete machines using a steel frame built by Harris Performance and based on the Suzuki Mk VII/VIII frame. A total of twelve engines were supplied to the Yorkshire based company with machines being built between 1985 and 1988. The machine offered is number 11 of the 12 and was ridden by Darren Dixon, a Padgett’s sponsored rider to victory in the 1988 British F1 Championship. It was subsequently sold to Brian Burgess in November 1988 for his son, John, to ride in the British Superbike Championship which, at that time still allowed machines such as the RG500 to compete. The ACU eventually banned two strokes form the British Superbike Championship at the start of the 1990’s. The owners continued to run the RG500 in National and club events until 1996. Roger Keen prepared the engine during the period that the motorcycle was racing and recently the engine has been stripped and rebuilt with new parts by Phil Lovet. The machine was recently returned to the livery that it wore when being raced by Darren Dixon in 1988 with the paintwork being applied by Padgett’s. It is in good condition in all respects following its restoration. This significant machine is offered with a letter from Clive Padgett confirming that it was Darren Dixon’s Championship winning RG500 and that Padgett’s sold the motorcycle to Mr Burgess in November 1988 together with a letter from Mr Burgess outlining the machines history during his ownership and a DVD showing Darren Dixon winning three races. The seller indicates that the bike is currently in the UK but, given the bike’s rarity and the fact that it’s a pure racing bike, I don’t think that will be any sort of issues for buyers here in the USA or anywhere else, for that matter. I honestly don’t know enough about RG500 race bikes to vouch for this bike’s authenticity, so I’m happy to defer to the experts in the comments section on this one. Real, or not, it’s a stunning bike, with just enough wear to suggest that it actually gets used from time to time. Bidding is active, but currently sits just north of $10,000 which is well short of where I expect it to end up.