Now this is what I call rare – the only Ferrari motorcycle in the world, and it’s up for sale!

I bet most of you didn’t even know that Ferrari made motorcycles!  Well, actually, they don’t, but they did officially allow a David Kay (of MV Agusta fame) to use the prancing horse emblem on a motorcycle that he created: 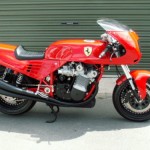 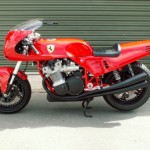 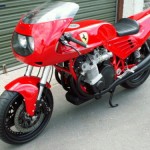 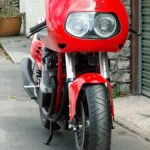 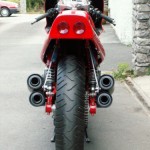 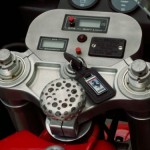 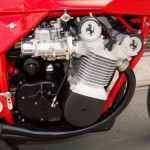 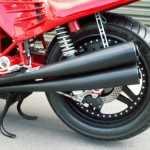 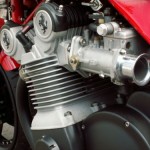 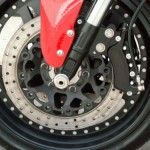 It all started when David Kay wrote to Enzo Ferrari’s son Piero, requesting to build a one-off motorcycle sporting the famous prancing horse badge in tribute to his late father. In a letter dated maranello, 23rd May 1990 and signed by P Ferrari himself (included in the comprehensive press and information file on this lot) Kay receives: ‘ the approval to place the Ferrari badge on your motorbike’ and is wished good luck with his project. When highly reputed MV Agusta ‘guru’ David Kay set about building this unique piece of engineering from scratch, he looked towards both the future and the past, as he thought of what may have been if Ferrari would have decided to produce a GT or endurance racing machine. Kay was inspired by the fact that Enzo had started his racing on a Scott two-stroke machine and so a project representing over 3,000 man-hours of work was launched.

The engine is a ‘scratch built’ 900cc, transverse, double overhead camshaft, four cylinder, eight valve unit with magnesium and alloy casings, driven through a five speed gearbox. The tubular chassis is made of Reynolds 531 tube, engineering on the motorcycle is irreproachable and the detail is quite astounding. The attention to this is quite incredible, with the master cylinder built into the obviously one off digital instrument panel and is again portrayed with the exquisite steering damper. Terry Hall, who also produced the double curvature reverse cone megaphones, made the entire bodywork out of aluminium. In Kay’s own words these are too beautiful to merely funnel exhaust gases from engine to atmosphere; ‘the noise is like a Messerschmitt chasing a Spitfire’.

Four years after starting on the project, although tested but never to its full capacity, the ‘Ferrari 900’ has an estimated top speed of 265 km/h producing 105bhp at 8,800rpm with a dry weight of a mere 172kg.

The bike has been featured with acclaim in worldwide publications ranging from ‘Scuderia’ in Japan, ‘Themen & Trends’ in Germany, ‘Motociclismo’ in Italy, ‘SM30’ in Spain and obviously ‘Motor Cycle News’ in the UK; not forgetting a full half page colour spread in the ‘Daily Telegraph’! With a long article in Mike Walker’s recognised work ‘The MV Story’, it has also been the star of several TV programs and exhibited at the Coventry Classic Bike show to mention just a few occasions.

Having spent most of its life in the vendor’s drawing room and rightly regarded as a work of art, he has now decided that the time has come for this masterpiece to find a new custodian. In today’s world of mass production, the chance to purchase this officially acknowledged one off tribute to Enzo Ferrari, may never arise again.

There’s not too much additional info on the web other than what’s listed, but I did find out that the last time this bike was on the market was back in December 2008 in one of Bonham’s auctions. It didn’t sell at the expected price of $300,000 (perhaps the fact that it looks like the bastard child of a Ferrari Testarossa, a Suzuki RF900 and an early 90s Suzuki GSX-R has something to do with it?) back then, so what do you think the odds are this time around at a price of $395,000?  But hey, at least it’s a better deal than the pair of Ducati MH900e’s at close to a million dollars!

Better yet, you can get a MINT 2009 Bimota DB7 AND an extremely lust-worthy 2004 Ducati 749R homologation special and still have $356,500 left!  However, if you still think that the Ferrari bike at $395,000 is a better deal and that you MUST have it in your collection, then get your credit card ready and .

I mean, just check out that Swiss cheese machining work on the steering damper knob. That alone has to be worth $50,000 right?  😉