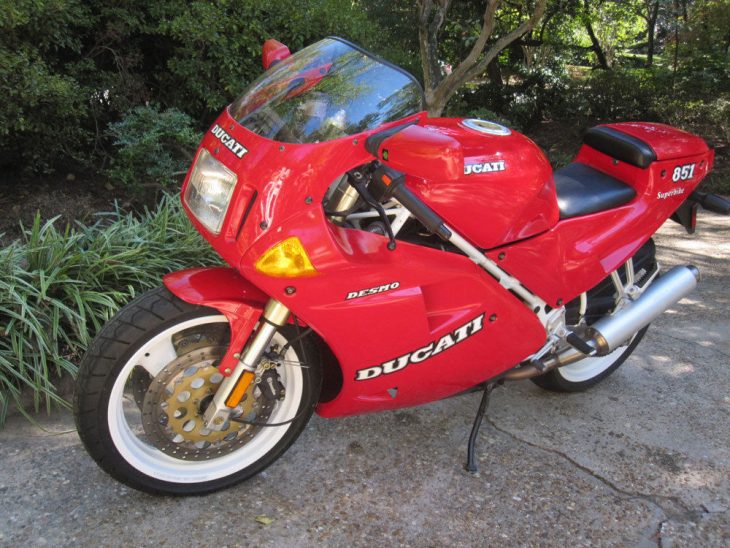 For connoisseurs, the Ducati 851 is the Bolognese superbike to have: it’s not as obvious or uncomfortable as a 916, and it was the first of the four-valve breed, the speartip of Ducati’s new push to be relevant to the modern sportbike world. The air-cooled, two-valve Pantah may be a classic, charismatic engine, but it couldn’t possibly hope to compete against liquid-cooled, sixteen-valve inline fours in the brand-new World Superbike series that was meant to showcase the very best production-based motorcycles in wheel-to-wheel competition. So Ducati added four-valve heads and liquid-cooling to their venerable L-Twin and quickly found success: a displacement advantage helped to offset the outright power gap compared to the four-cylinder bikes, and handling was excellent. 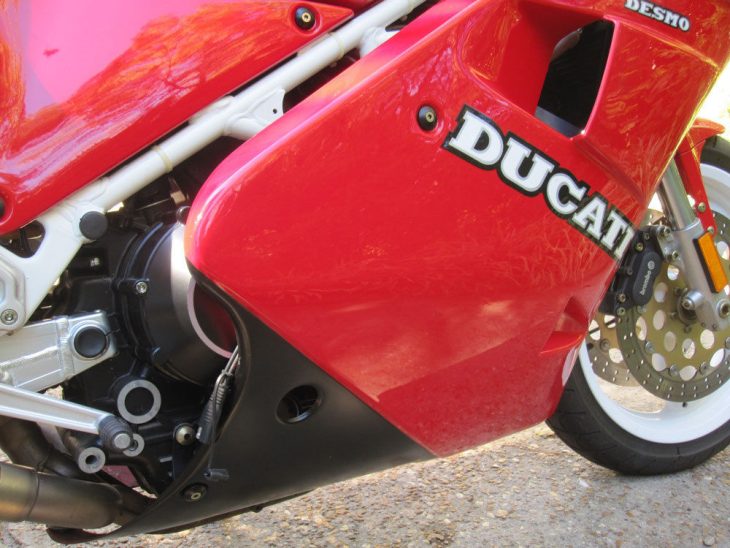 Styling is more “functionally elegant” than “dripping with sex,” but that means humane ergonomics and less flash for Ducati fans more interested in performance than posing. And although the bike’s 93hp isn’t huge by today’s standards, it has the famous Ducati torque that’s gone missing from bikes like the 1199 as they’ve chased revs and horsepower to compete with the fours. The low-mount dual exhausts seem to sound much better than the 916’s undertail system, for some reason, and they’re also obviously much less likely to roast sensitive parts of your anatomy. Early four-valve bikes like the 851 and 888 can get expensive to maintain if you don’t do some of the work yourself: frequent regular belt changes and valve-adjustments don’t require pricey parts, but are labor-intensive at standard shop rates. They can be fickle, but the slow evolution of these bikes’ hard parts mean spares shouldn’t be too difficult to track down. In general, the rule with Ducatis is: buy wisely or pay the price, as a “cheap” example can quickly become a very expensive proposition. Luckily, today’s bike avoids that by being fastidiously maintained and enthusiast-owned. 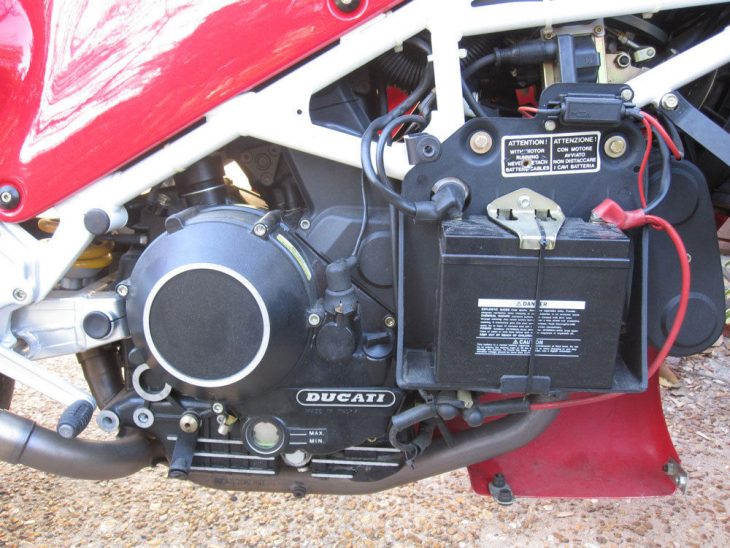 From the original eBay listing: Low-Mileage, One-Owner 1991 Ducati 851 for Sale

I purchased this bike in June of 1991 and have been the only owner since the bike was new.  I purchased the bike from Dunbar Motorsports in Brockton, Massachusetts.  The bike is currently located in Atlanta, Georgia.

The bike is in near-pristine condition, and is a desirable bike for a collection, or as a concours bike, or just as a daily rider.

Here is literally every flaw I could find, no matter how minor.  All of these minor bumps and bruises are shown in the photographs:

As I said, all very minor.  Other than these minor flaws, the bike is in pristine condition, and is exactly as it rolled off the showroom floor in 1991 — down to the original Michelin Hi-Sport tires which are still in good shape (though I might recommend changing them out if you plan to take many tight corners, as they are 26 years old!).  There have been no aftermarket modifications whatsoever.

The bike was completely serviced last fall by Ducshop in Marietta, Georgia (http://ducshop.com), including belts, fluids, battery, etc.  The bike has a clear Georgia title, is registered and insured, and ridden periodically to keep its legs stretched.  The bike runs perfectly, and is a real thrill to ride.

The bike comes with all of its paperwork, including the service records, original Owner’s Identification Card, original Purchase and Warranty Registration, original Bill of Sale from the dealer (the bike cost $12,350 in 1991), and the original Owner’s Manual.  The bike also comes with a race stand that the dealer originally included with the sale of the bike (the bike has never been raced or has even been on a track).

The bike is the Strada (street) model of the 851 Superbike.  Like all Superbikes, it has the 8-valve (4 per cylinder), fuel injected “desmodromic” engine (the valves are both opened and closed by a cam to eliminate any possibility of valve float at high RPM).

The 851 Superbike model was first launched in 1987.  With its powerful liquid-cooled, fuel injected, 8-valve V-twin desmo engine, its signature steel tube trellis frame, Brembo brakes and Marzocchi suspension, it heralded the start of the modern era for Ducati.  Built for the fledgling World SuperBike series, Ducati quickly won three World SuperBike crowns in a row 1990-1992, with Frenchman Raymond Roche aboard the 1990 851, and Doug Polen riding an 851 bored out to 888cc. 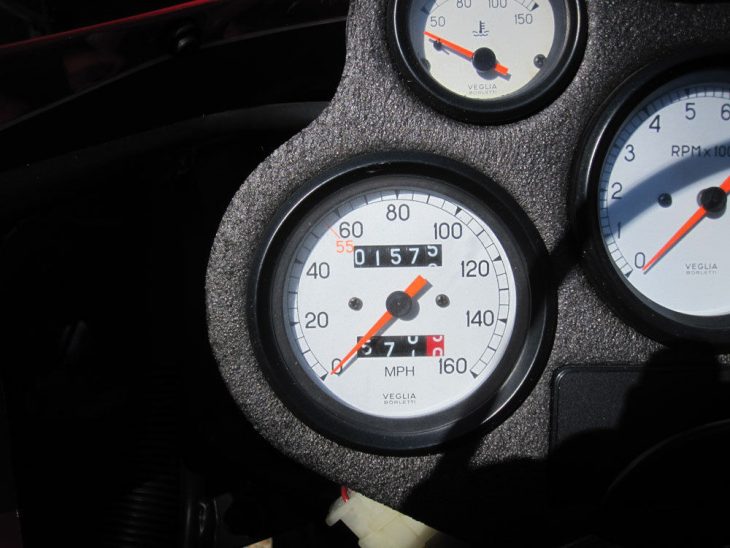 The unfortunate thing about a bike like this is that part of the value is derived from the low miles and originality, a shame since these are great riders’ bikes. In addition, that functional styling means a riding position that won’t outright murder your spine, so the low mileage is doubly tragic. In such sharp condition, I have no doubt this one will find a very happy buyer: bidding is already up to $8,950 with several days left on the auction. 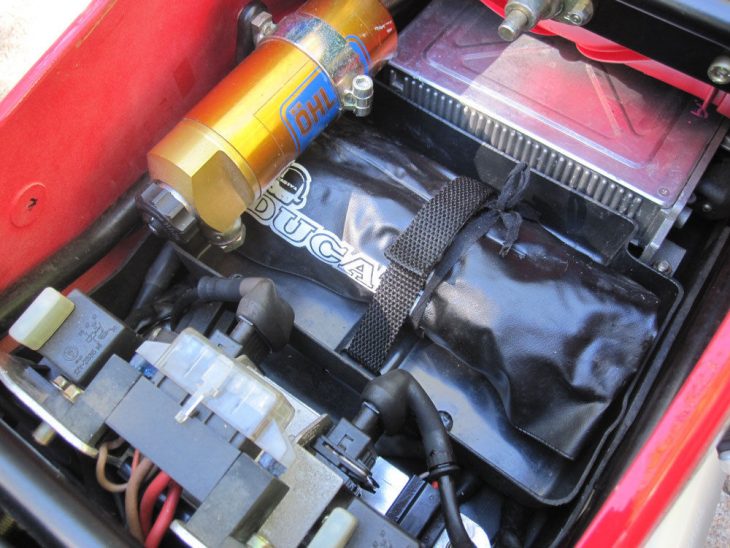