This is a seriously modified RVF400R finished in Rossi Repsol colors.  Located in Aspen, Colorado is a Honda RVF400R that is set up for race use but does look to have lights even though it isn’t titled.  It would probably be best to let the seller explain this bike:

THE FASTEST RVF400 IN THE USA, PERIOD. 85 REAR WHEEL HORSEPOWER ON PUMP GAS!

This motorcycle was built from the ground up to be the fastest, lightest, best handling RVF400 in the USA. Purchased as a Japenese import from GPC Moto in Sacremento, CA in Fall 2003, this bike was completely stripped down and rebuilt by BRG Racing (also in CA). In a colaberative effort by BRG Racing, RLR Motorsports of England, and Jack Silverman Racing of Aspen, this bike took two race seasons and a total of six years to perfect.

-One of only three HRC Labratories Factory motors in the US. Purchased new in crate from Jack Silverman Racing, proffesionally broken in at BRG Racing, then tuned using many trade secrets and custom go-fast bits from RLR Motorsorts. ALL ENGINE INTERNALS HAVE BEEN CRYOGENICALLY FROZEN FOR DURABILITY.
-This bike was used as the prototype to develope the first and only reliable 1mm overbore kit for the RVF, which added 8hp and noticable torque.
-With over $50,000 invested, there is way too much to list, so please e-mail with questions and picture requests.
-EVERY SINGLE PART OF THIS BIKE WAS SPECIFICALLY PURCHASED OR CUSTOM MADE TO MAKE THE PERFECT RACE BIKE.

**NOTE: I’VE SPENT A LOT OF TIME AND MONEY TO MAKE THIS BIKE STREET LEGAL SO THE OWNER CAN TITLE IT. HOWEVER, THIS IS A TRUE RACE BIKE AND COMES WITH A VERY COMPLETE RACE KIT AND MORE SPARES THAN I CAN MENTION.

Now, this bike does sound to have some serious kit in it that I have no knowledge of so I’m not in a position to comment.  However, I can confirm that when you start making one off race parts the bill ads up quickly so it isn’t a surprise that the seller claims to have so much into this bike.  Sadly, the bike isn’t titled.  The asking price of $12,500 is  far higher than we’ve seen any RVF at but, again, this bike includes some very serious aftermarket parts and a substantial spares package.  If this project interests you, see this very beautiful RVF on Craigslist here. 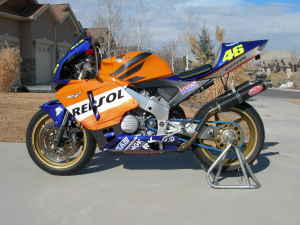 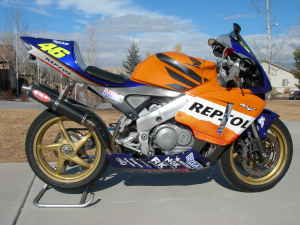 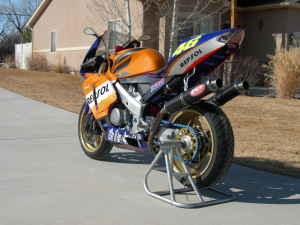