Toward the top of the 2007 peak, Ducati planted a red, white and green flag, backing it up with the testastretta EVO engine and some startling componentry.  Today’s 1098S claims under 3,500 miles and though it isn’t well documented, what’s shown here looks excellent. 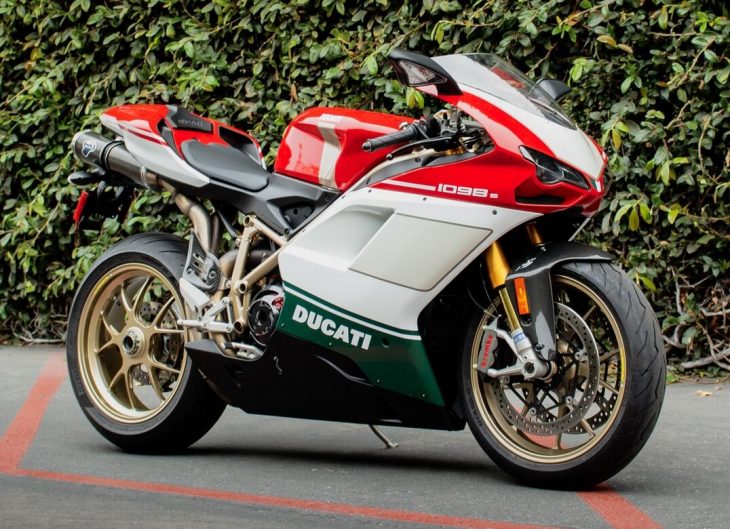 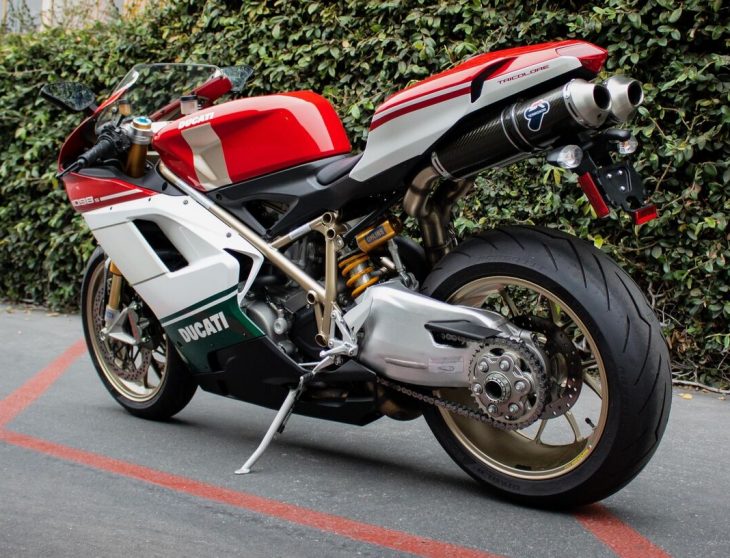 Returning to the in-house designer Giandrea Fabbro, the 1098 put the headlights back on the same plane, though they had progressed to an expressive shape.  The fairing has just a couple of openings, and its sleekness plays off the muscular chassis tubing behind.  Though the 160 hp L-twin is shared with the base model, other systems are some of the best the manufacturers had to offer.  330mm Brembo brakes use a caliper carved from a single aluminum billet, and Marchesini wheels are forged – saving 4 lbs. each.  Öhlins provided 43mm forks with titanium nitrided sliders, as well as their remote reservoir monoshock.  The dash saves lap info for later analysis and shows the rider a shift light before the rev-limiter does its thing.  The light gold of the frame and wheels recalls previous generations, and the gold stripe on the tank looks a bit like the bare fiberglass “fuel gauge” on early racebikes. 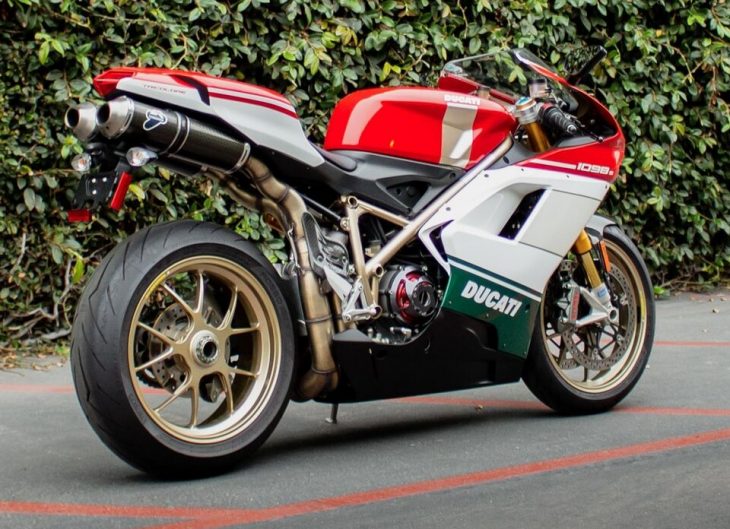 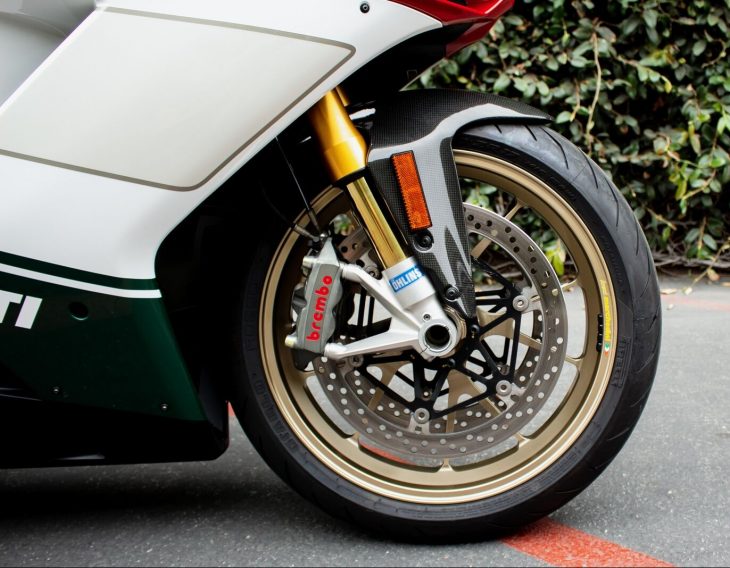 From a newer eBay seller with a lot more collectible cars than bikes, a little stingy with photos but provides a short ownership history in the eBay auction which is often not available.  The as-delivered condition is its own comment on how well the TriColore was equipped from the factory.  Evidently this 1098S is in California though the auction shows Philly –

The example on offer here currently shows 3434 original miles and remains in excellent and well-kept condition with only a few minor modifications. It is a lifelong California example and was originally sold new at Ducati of Newport Beach and presumably stayed in the immediate area for the next 14 years. The previous owner purchased the 1098 from them in March of 2021 at which time it had a fresh service. He rode the machine sparingly, opting to keep the bike on a stand in his office. Under his ownership the Tricolore was well maintained and kept in good order, being serviced once more during ownership before our purchasing of it in September of 2022.

Currently, this Tricolore is on display at The Motoring Club in Marina Del Ray. It is in fantastic, collector-grade condition, with no issues cosmetic or mechanically. It remains almost entirely stock with the exception of a billet clutch pressure plate. It still has its factory-installed Termignoni carbon fiber exhaust which produces a fantastic sound and nicely trims out the bike. 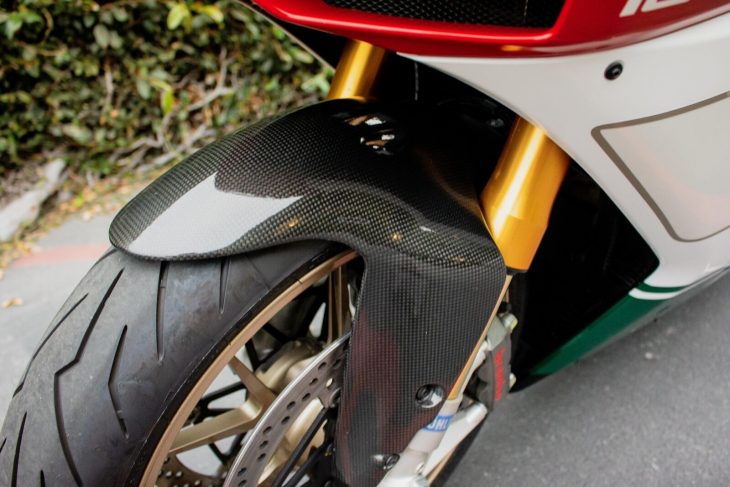 This example looks to have had the previous owners most bikes dream about.  While any number of today’s showrooms have 160 hp models ( or greater ) on display, none will be without a flotilla of electronics to keep the wrong mistake from happening, and that might be the major difference.  And while the 1098S might not be leading the charge after fifteen years, the rider can still say it was all their doing. 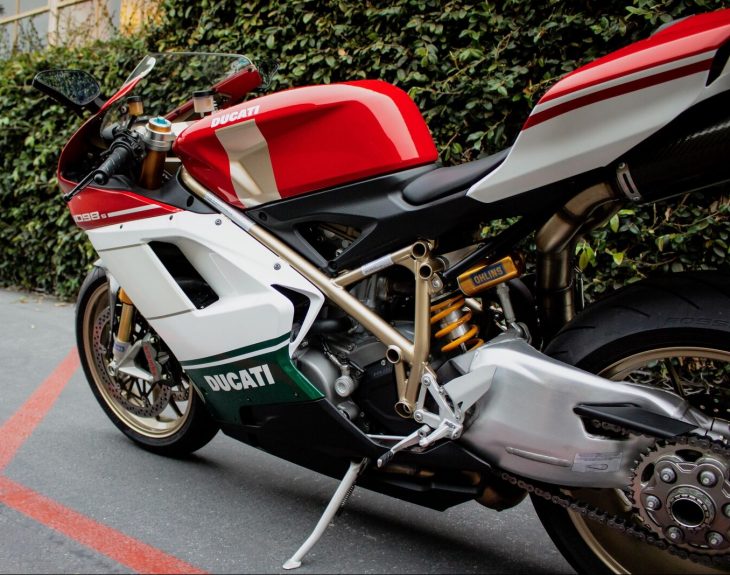