As the icing on the 1970’s superbike cake, Kawasaki’s KZ1000 built on the 900 Z1’s formidable reputation.  Bob’s Z1R-D1 has quite low miles and a curatorial owner who emphasizes correctness for finishes and mechanical updates. 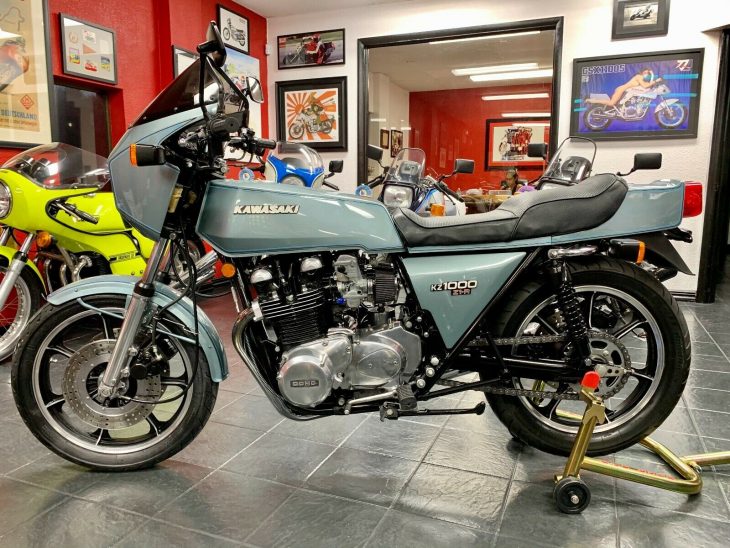 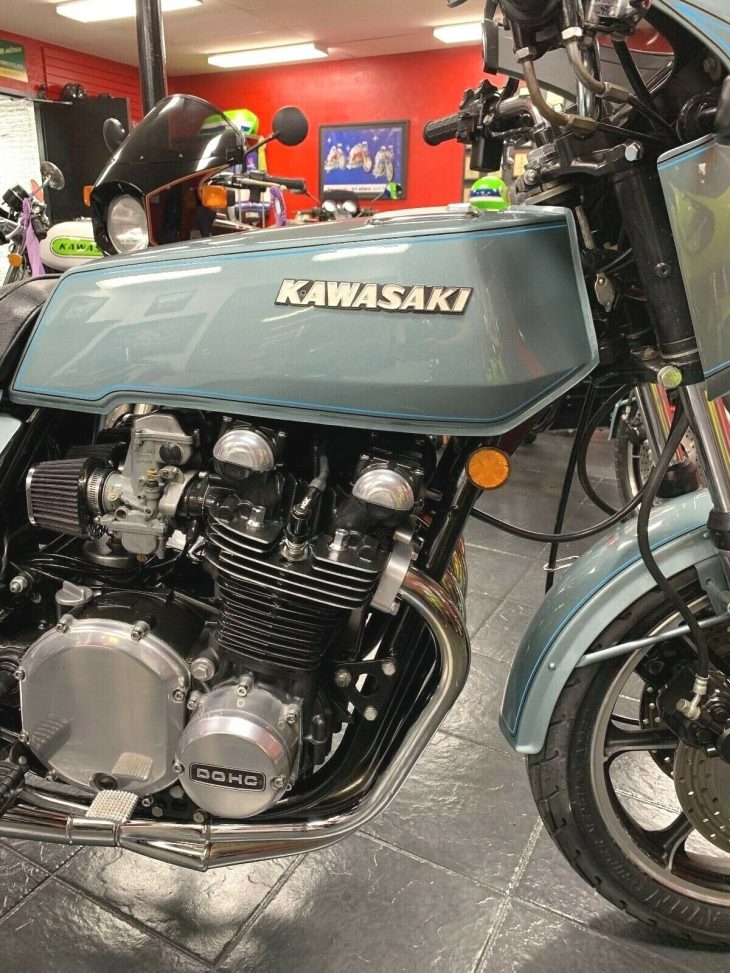 It’s easy to see the lineage from earlier Kawasaki’s early -70’s four cylinders, even though the factory stylists put a great set of bodywork on the Z1R.  Inside, the 1015cc mill had a heavier crankshaft and the four Mikuni carbs had slightly larger bores.  The new four-into-one exhaust let the 94 horses loose and weighed less too.  Headstock gussets and firmer rear shocks shored up handling, and three big disk brakes – drilled up front – slowed the 18-inch alloys with authority.  The angular café design is resolved from nose to tail and even takes in the rectangular fuel cap. 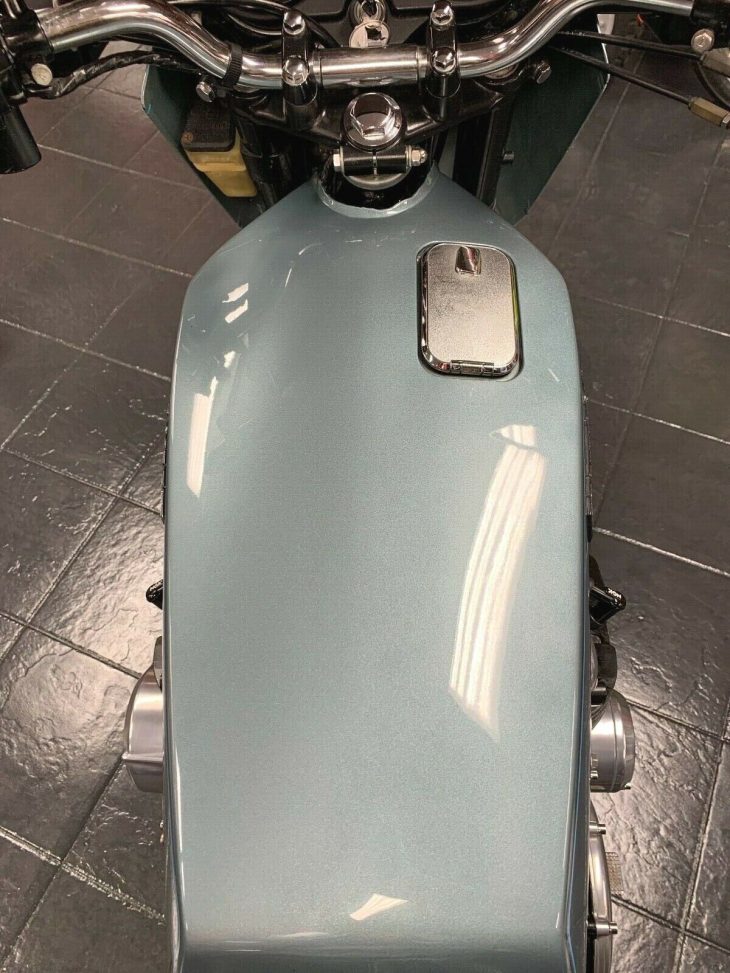 Look into the background of Bob’s pictures and you’ll see many Z1R’s, other period superbikes, and blue ribbons – as he says, this one won’t disappoint.  The engine and chassis have been given new gaskets and fasteners but keep their original looks.  Period upgrades like V&H exhaust and K&N filters accompany the rebuilt carburetors and new Avon tires.  The silver blue metallic paintwork has been refinished, but is virtually indistinguishable from new.  Some of Bob’s comments from the eBay auction:

THIS IS AN AMAZING UN-RESTORED EXAMPLE THAT HAS NEVER HAD THE FRAME OR ENGINE PAINTED. SOME OF THE HARDWARE WAS REPLACED WITH OEM OR “NOS” PARTS, BOLTS, SCREWS, NUTS AND WASHERS ARE NEW OLD STOCK AS I HAVE A VERY EXTENSIVE “NOS” INVENTORY, ALONG WITH COUNTLESS OTHER PARTS.
ALL THE PERIOD CORRECT MODS ARE BOLT ON ITEMS THAT CAN EASILY BE CHANGED BACK TO THE ORIGINALS. SO IF YOU ARE LOOKING FOR AN ALL ORIGINAL Z1R THIS IS A GREAT BIKE TO START WITH AND I WOULD BE HAPPY TO HELP THE NEW CUSTODIAN SOURCE THE NEEDED PARTS.
THE BODY WORK WAS PAINSTAKINGLY RE-FINISHED TO A DEEP LUSTER SHOW QUALITY FINISH USING THE METALLIC STARDUST SILVER. 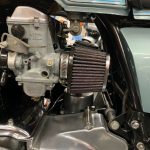 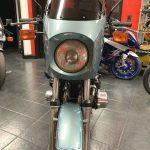 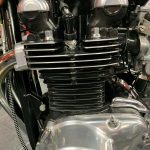 I THOROUGHLY INSPECTED AND RE-SEALED THE OUTER COVERS/SEALS AS NECESSARY WITHOUT REPAINTING THE ENGINE SO NO OIL LEAKS ON YOUR CARPET. THE ORIGINAL CARBS WERE ULTRASONICALLY CLEANED AND REBUILT, RE-JETTED, AND SYNCED  WITH ALL NEW SEALS AND GASKETS. THE PERIOD CORRECT VANCE & HINES EXHAUST WAS DISASSEMBLED, STRIPPED AND RE-CHROMED TO BETTER THEN NEW SPECS (NOT AN INEXPENSIVE TASK).
THE WHEELS ARE ALL ORIGINAL AND IN PERFECT CONDITION. SHE IS FITTED WITH AVON TIRES “SEMI PERIOD-CORRECT”. THE BRAKES WERE COMPLETELY OVERHAULED. THE SEAT IS A CUSTOM SEAT FROM THE 70’s AND IS IN AMAZING PERFECT CONDITION. THE WINDSCREEN AND SEAL ARE “NOS” AS ARE THE LEVERS AND MORE COMPONENTS THEN I CAN LIST. A NEW RK CHAIN AND SPROCKETS WERE INSTALLED. 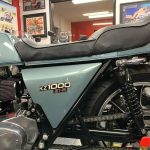 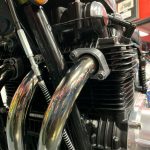 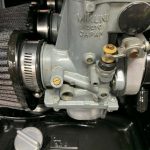 THE FRAME HAS NOT BEEN REPAINTED. THE FRONT FORKS HAVE BEEN REBUILT WITH THE LOWER LEGS PROPERLY REFINISHED TO OEM STANDARDS. THE REAR SHOCKS ARE PERIOD CORRECT PROGRESSIVE UNITS. THE TANK AND SIDE COVER EMBLEMS ARE NEW OLD STOCK. THE ORIGINAL OWNERS MANUAL AND KAWASAKI POUCH ARE INCLUDED. THE BIKE HAS THE ORIGINAL LION HEAD KEY. LIKE ALL MY BIKES THIS WILL BE A BIKE THAT WON’T DISAPPOINT.
WITH ONLY 9,200 ORIGINAL MILES THE BIKE STARTS IDLES RUNS AND RIDES LIKE IT DID IN 1978 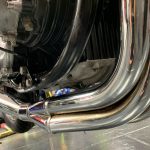 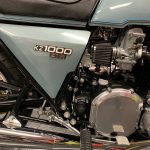 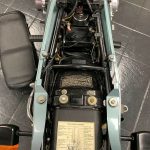 The KZ1100 and Z1R went a lot of places, of course it liked a good straightaway and did well at the drag strip.  When race-prepared they were a force in superbike racing – AMA and all over the world.  Compared with its contemporaries, it struggled against newer designs from the other Japanese manufacturers and got gigged for the smallish fuel tank.  But for many owners, the bulletproof mechanicals and sharp fairing give the Z1R a head start.  Bob’s auction has a $12,000 starting bid and buy-it-now of $17,900 and he can be contacted through the eBay auction. 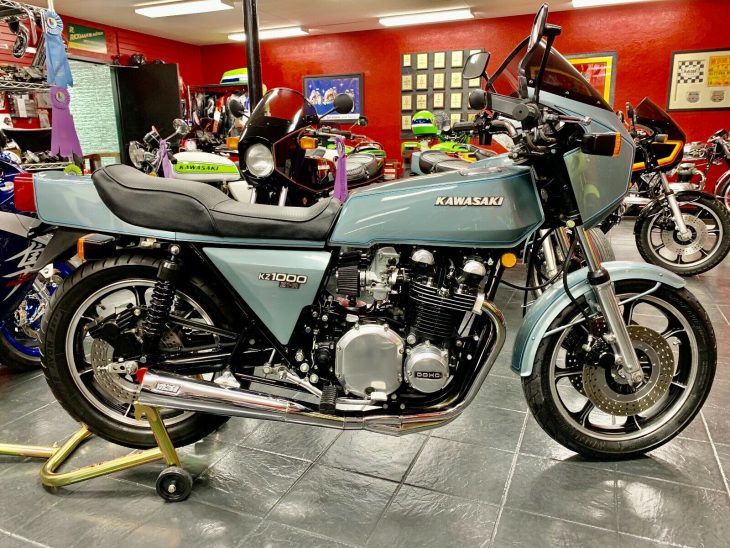