Ducati built just 1,000 of the stunning MH900e in 2001 and 2,000 the following year, making this one obviously a bit interesting right out of the gate. It’s apparently a pre-production prototype, with some clear differences between it and the regular production version, although the original flat-black pre-production bodywork has been replaced with a set of very sexy carbon-fiber Ducati Performance parts as seen in the photos. 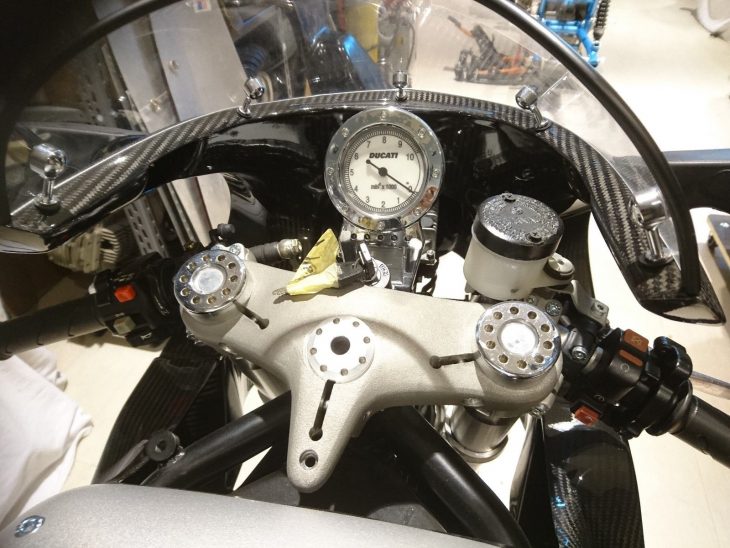 Pierre Terblanche’s redesign of Ducati’s 998 superbike may have been controversial, but he was on-point here with this Mike Hailwood tribute. The styling of the MH900e wraps a modern-ish two-valve v-twin powertrain, stiff trellis frame, and quality suspension in bodywork that manages to be both futuristic and retro at the same time. There are hints of NCR’s racebikes, the Ducati Pantah, Hailwood’s TT machine, and the undertail exhaust suggests the 998. 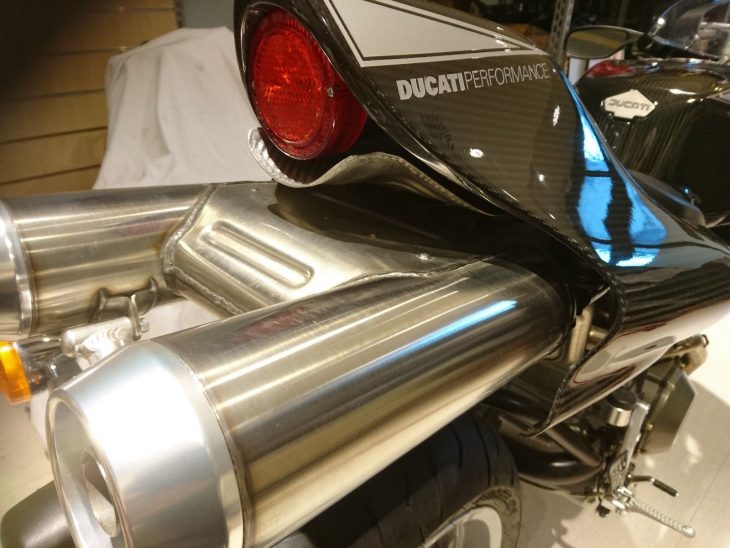 Power from the 904cc air and oil-cooled twin was modest, with a claimed 75hp at the rear wheel, although the engine’s flexibility and torque mean that there’s more performance on tap than meets the eye when pushing the 410lb machine. Ergonomics were pretty cruel and the seat very tall, but at least the tiny stock 2.2 gallon fuel tank meant plenty of chances to stretch when you pause to fill up: even allowing for the Ducati’s good fuel mileage, you’re still looking at just 90 miles or so between stops.

For sale a unique, once in a lifetime opportunity to acquire the real factory prototype of the DUCATI MH900e.

Here below a little description of this particular model:

The MH900e began as a concept created by the Ducati designer Pierre Terblanche in homage to Mike Hailwood’s 1978 win of the Isle of Man TT. Giving way to the model designation “MH”.

In September 1998 the sketch was presented to the general public at the Intermot Show in Munich and met with rave reviews. Due to the enthusiastic response from the press and public, Ducati decided to post a questionnaire on their website to test the true interest of the MH900e fans. 300 Ducatisti responded positively. With this information, Federico Minoli and Massimo Bordi (General Manager of Ducati) decided to take the risk and produce a limited run of two thousand hand-built bikes. The first one thousand bikes would be produced in 2000 and the second thousand would be produced in 2001.

The sale of the MH900e was as unique as the bike itself. Ducati made the decision to sell the new bike directly to the consumer exclusively via the Internet in a form of e-commerce known as B-2-C (Business to Consumer). This was a first for any motorcycle manufacturer. It was a risky move, but the result could not have been any better

The Ducati website opened for orders on January 1, 2000 at 00:01am GMT at a price of €15,000. The first 1000 units were sold out in 31 short minutes. The remaining bikes were sold over the next few weeks. Individuals made purchases from 20 different countries. The estimated breakdown of the sales was 30% from Europe, 30% from the US and 39% from Japan.

This particular bike was used by Ducati Experience Department to control all assemblies, parts and components, to make sure everything was fitting and operating properly before production started. Many components are “one-off”, and many were pre-production pieces. the battery holding frame is unique, showing a different position of the battery with respect of the production bikes. also the front fairing frame is a bit different than production ones. All of these parts were carefully kept to maintain the originality of the bike, and to show the real spirit of this amazing prototype. like the top fork tee which was left raw instead of being polished like the production ones.

On the gas tank there are signatures and dates, possibly showing various stages of testing and different phases of assembly. every single piece on this bike is authentic and original Ducati for this model, nothing has been altered or manufactured to complete it.

The bike was acquired from Ducati with a non-production plastic body, painted flat black like the rest of the bike, including frame and swingarm. the exhaust was also custom-made, clearly an assembly try-out, yet perfectly working.

We did a “conservative” restoration on the bike, taking it completely apart, making sure every original bit and piece was kept and restored to obtain this amazing piece. we also decide to maintain the black look that sported when we got it, just upgraded it a bit with proper carbon body and custom-made graphics (Ducati made them for us).

the frame and swingarm are pre-production original and authentic DUCATI MH900E, with correct ZDM homologation number, properly and correctly stamped on the neck, with frame serial number being 0000001. everything legit and correct. fully documented with invoice showing frame and motor number.

Some minor parts like clutch, oil tank, and front brake tank aluminum holders, or the steering damper, are not installed but will be in a short time. Everything works perfectly as it should on this amazing piece. A solid investment for any collector or Ducati aficionados, this is the kind of bike that, few years down the line, will be popping up at auctions. Don’t loose the opportunity. 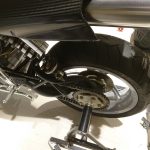 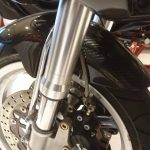 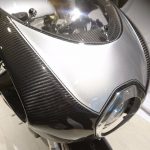 There are no takers yet at the $50,000 starting bid, but there’s plenty of time left on the listing. Regular production bikes already command prices of just under $20,000 or so, so I expect that the right collector would pay more for this museum piece. Certainly, it’d be criminal to run it on the road, considering its historical value, even if you could legally register it for road use…