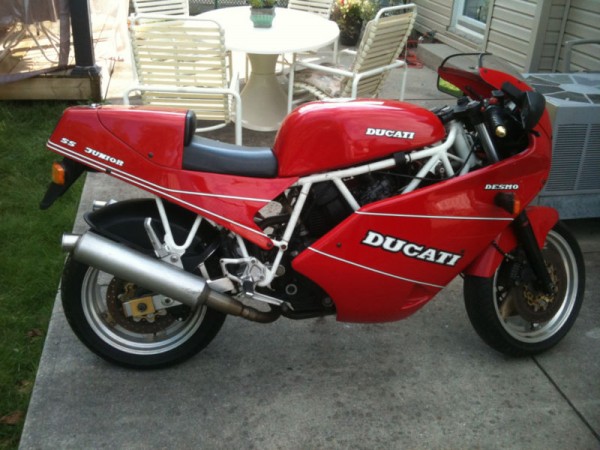 All I could say when I saw this Ducati 400SS Junior l was, “Wow, that is odd”.  I had forgotten Ducati had jumped into the 400cc Japanese market.  Unfortunately they took the accountants idea and just sleeved down an existing model instead of building a 400 from the the ground up.  Actually, it was a sleeved down version of an already sleeved down version.  The 400SS Junior  is based off the 750SS which was based on the 900SS.  Max power is 42HP (18 down from the 750SS) and there are other money saving short cuts such as cheaper suspension components.  It looks like the Junior was produced from 1989-1990, double front discs is an identifier, and then restyled a bit  for the 1991-1997 production run with a single front disc.  Who can fill in the blanks on any other difference?  Even though this is listed as a 1991 I believe it is actually a 1990 model with the double front discs giving it away. Who would want an old, slow 400 called a Junior?  Me, for one!  If you look hard enough, you can always find a Bayliss Replica or Desmosedici for sale,  but a 400 Junior?  That is a rare Ducati.  I love anything unique that the next guy doesn’t have and this fits the bill the perfectly.  I would imagine a Ducati collector or two would like one to fill out at a collection. It sounds like it was a decent handling bike with an engine that just wasn’t comfortable in 400cc form.  It looks like from 1991 it was available with a half fairing.

IT WAS IMPORTED FROM JAPAN TO CANADA

IT IS TITLE IN ONTARIO

MAKE ME AN OFFER Starting bid is $5,800 and the auction is up and running. 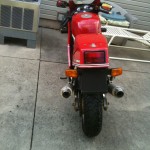 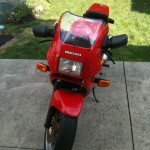 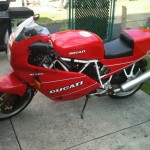 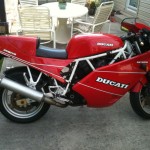