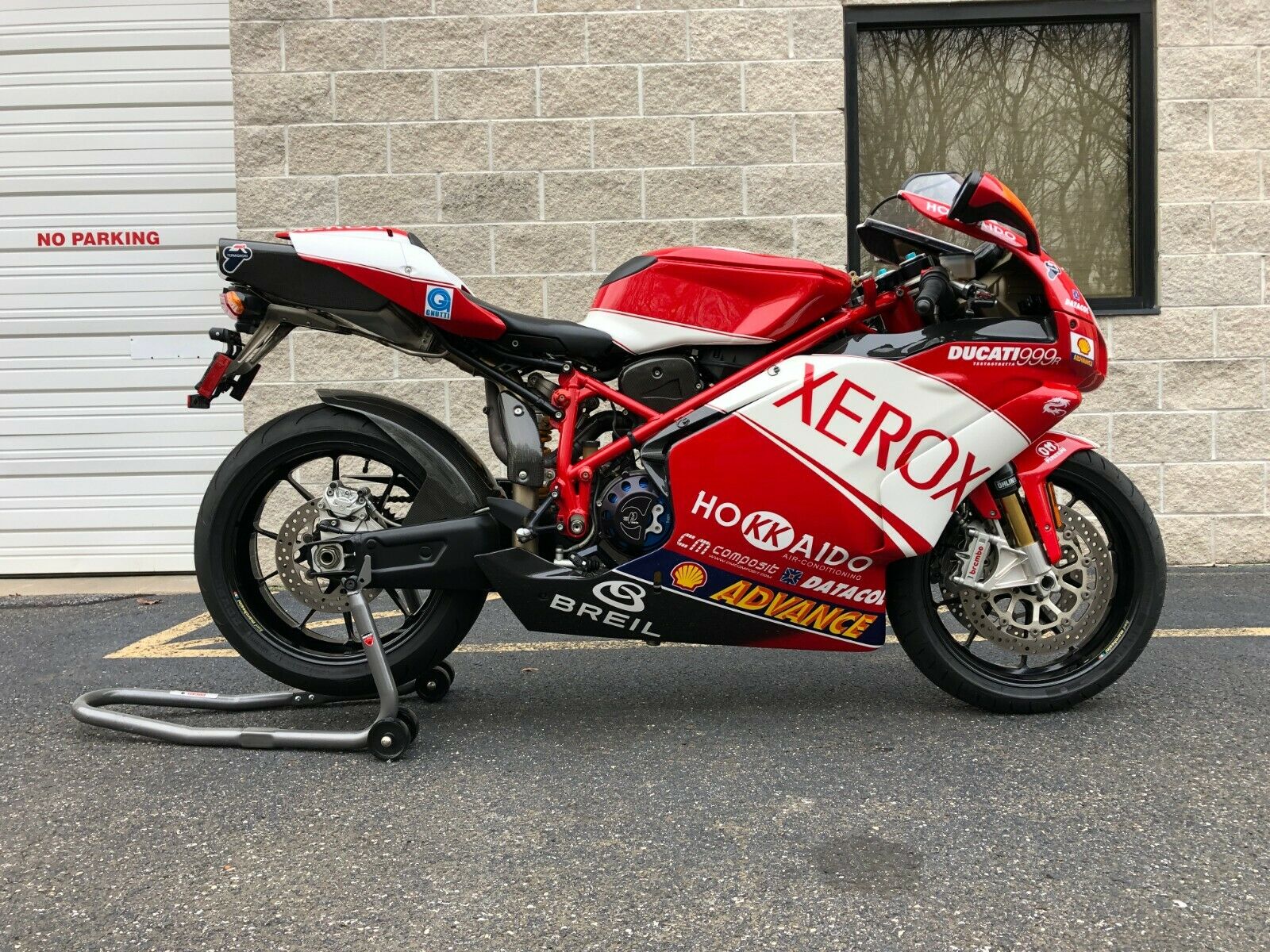 The Ducati R bike has always been a major factor in the history of Ducati. Renowned originally as homologation machines in order to go racing, the R brand has taken on a life of its own as a limited edition, high performance exclusive tier of the existing model line. And while there may be some scoffing that Ducati R models are simply marketing exercises, the truth is that the R generally represents the top spec for the brand, with components and upgrades to match. Such is the case with today’s bike, a 2006 999R in striking Xerox livery. The 999 is known for a few parlor tricks. The first is that in the eyes of many, it is…. well…. ugly. Designer Pierre Terblanche had big shoes to fill when he was chosen to pen the successor to Massimo Tamburini’s 916/996/998 masterpiece. In photos, the 999 seems to indicate that Terblanche choked. The resulting bike simply did not flow like the earlier Ducati models. But in person the 999 is astonishing in its presence. All this considers a bike in a base color (i.e. red). Pop on the very limited Xerox racing livery, however, and this model truly comes visually alive. Gone are the huge expanses of one color across the side panels (they are long and flat compared to previous models). The diagonal placement of the side logo helps make the bike appear shorter than otherwise. Similarly, the red/white livery on the nose helps dampen the sharpness of the stacked headlight set up, and reduces the 999’s beaky profile. Of all the graphics available, the Xerox is the best looking of the 999s, although I do miss the peek-a-boo carbon bits of the fairing found on the non-liveried bikes. 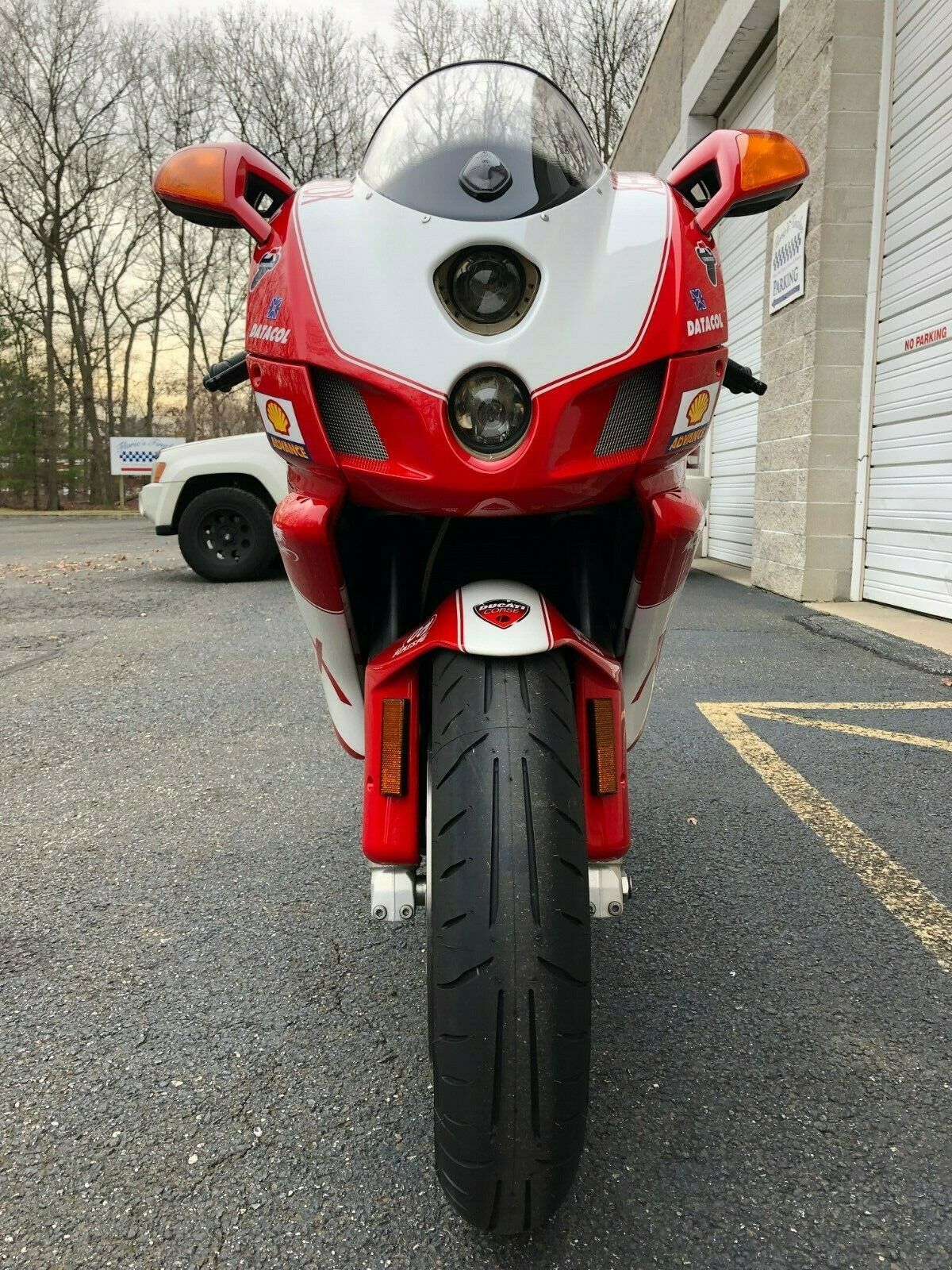 The seller has done a decent job outlining how one makes an R bike. You start with the already potent 999S, you add horsepower and better brakes/suspension, bolt on some very glam farkles, and you put the whole thing on a diet. It’s a very simple recipe that Ducati has been following for decades, and results in some very iconic bikes. Going one step further, Ducati artificially limits the number of bikes produced, and attaches an exclusive production number on the headstock. The result is looks and performance with built-in exclusivity as a standard feature, right out of the Bologna factory. 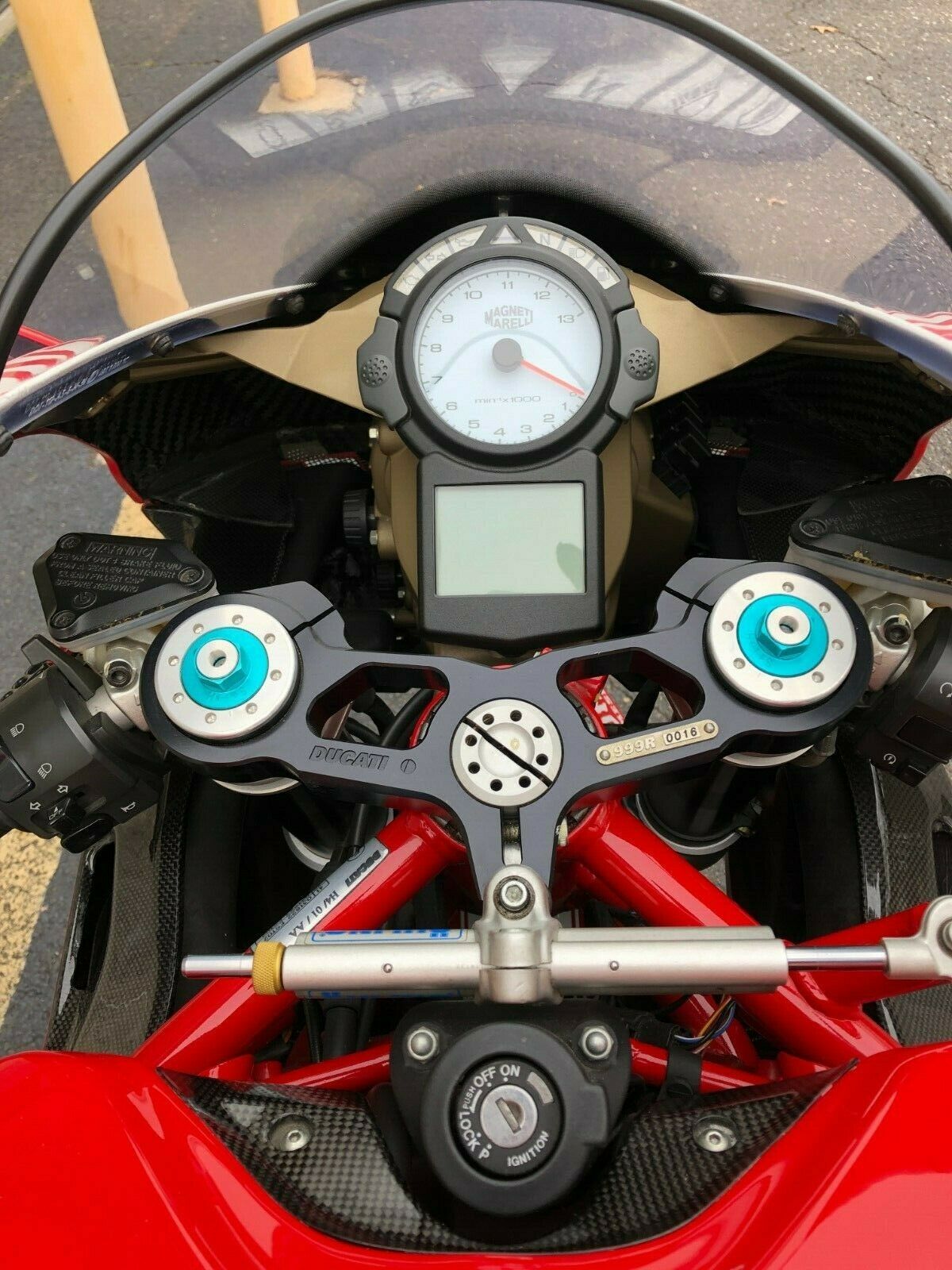 More from the seller:
It was the ultimate track weapon in 2006. And still today, its a very impressive bike.

Hugely collectible, these are getting very rare to find in this condition. This bike is in almost flawless condition.

This bike is one of the most beautiful bikes that Ducati has ever built, and they just dont make special models like this anymore. If you set out to make a replica of this bike, the paint and graphics would cost a fortune. It’s not that hard to find a 999R, but the Xerox is really rare and special. 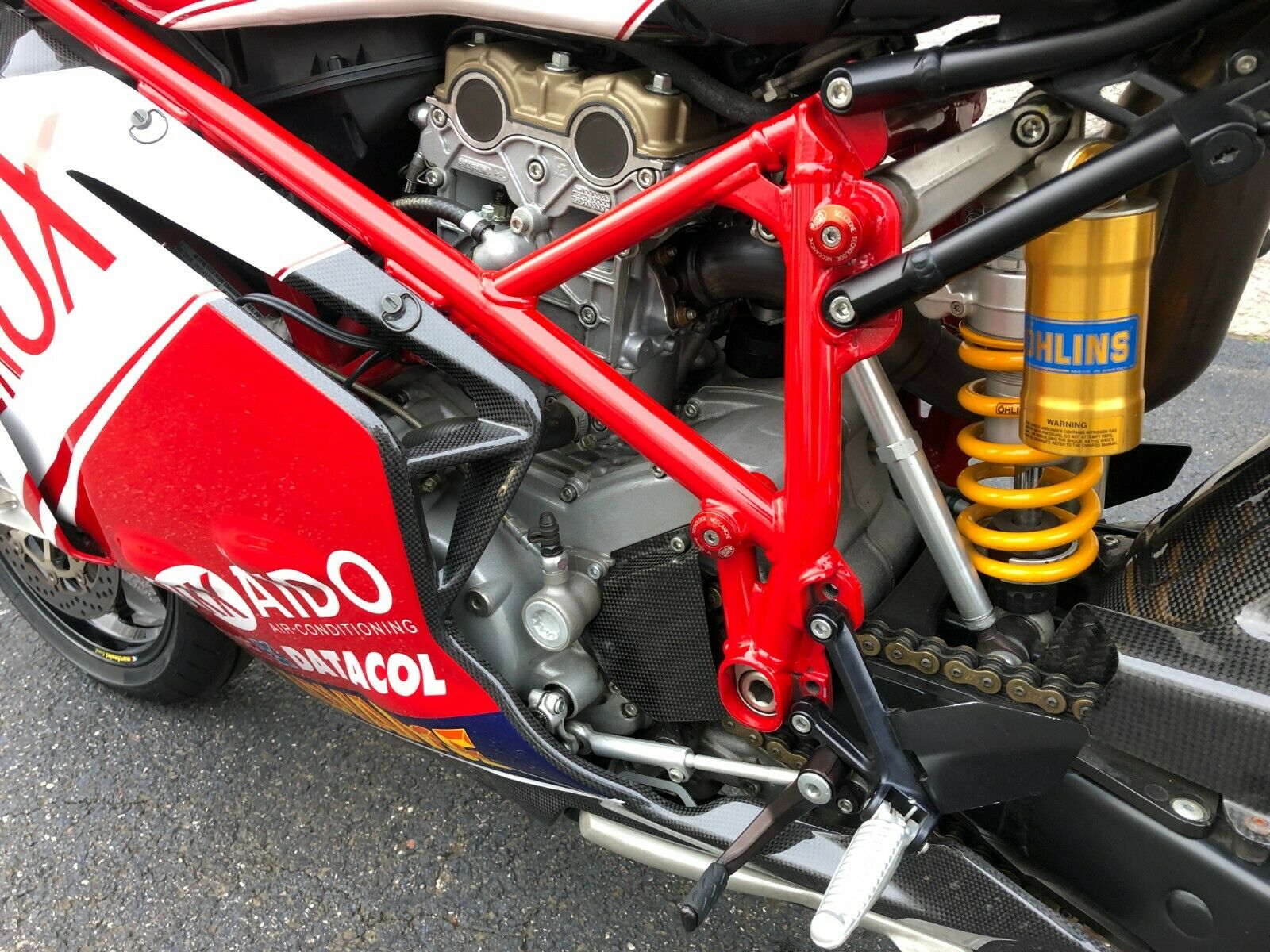 So there is the other Ducati R model parlor trick: it’s expensive. R bikes have always commanded significantly higher prices than standard models. Some of this is due to the costs associated with the higher-spec components, and some is due to the drive for even more exclusivity. Regardless, R bikes are always more collectible than a base edition and will be the ones most likely to grow in value over time. And since many R bikes are riders, finding a low mile version with a rare graphics package and in sublime condition can be difficult. Today’s example has just 5,353 miles, looks to be in incredible condition, and is offered for a $20k Buy It Now. The seller appears to be open to offers, but I’m not sure I’d expect too much back pedaling. The dollar ask is strong, but so is the bike on offer – search the pages of RSBFS for another Xerox and you’ll only find a few – and all from some years back. Check it out here and then jump to the comments and share your thoughts on the best looking 999. Good Luck!! 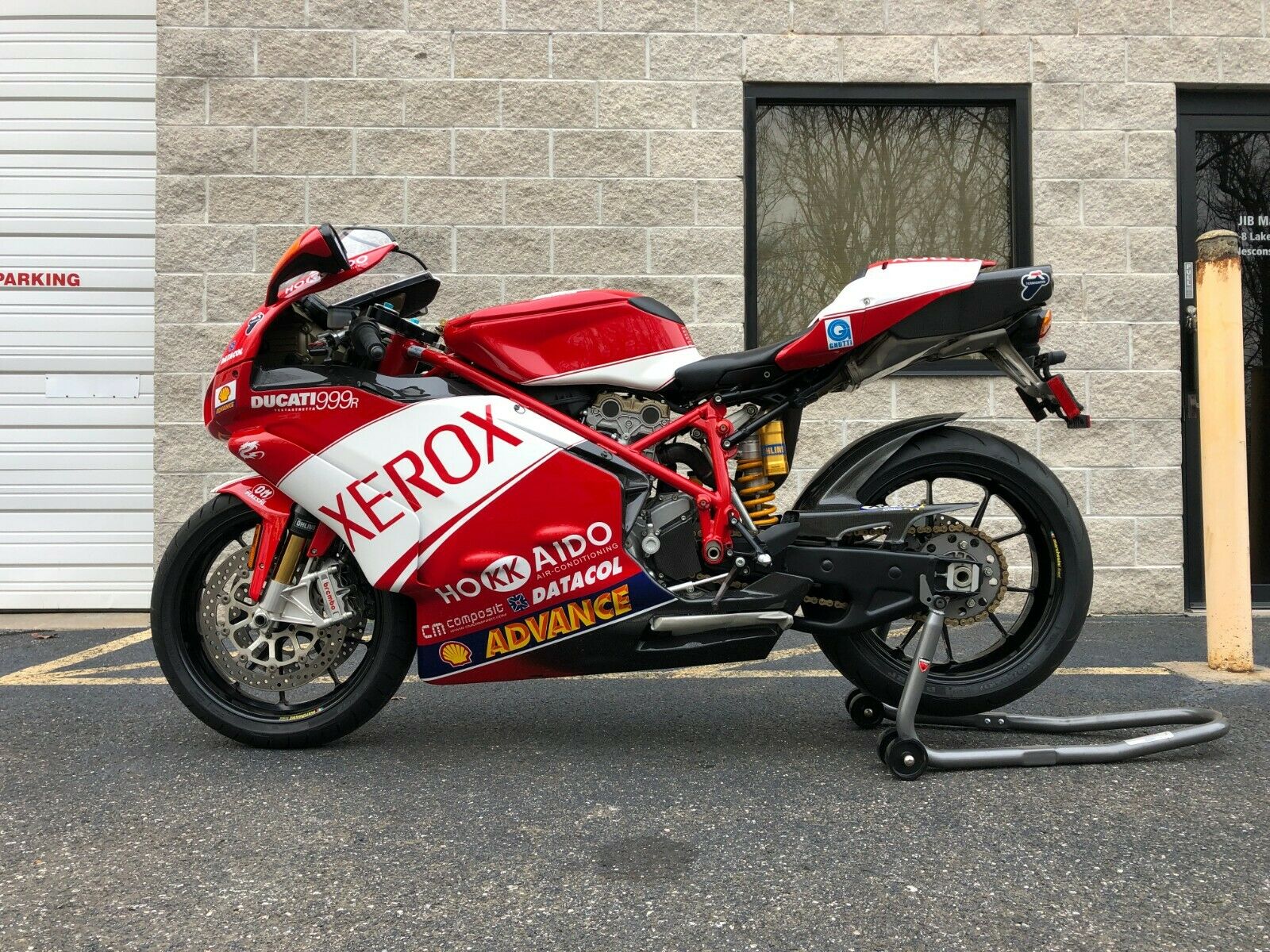 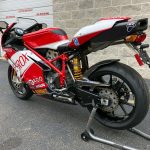 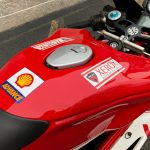 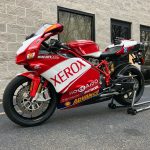 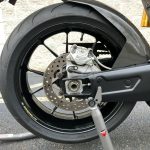 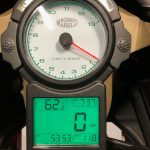 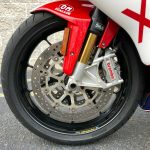 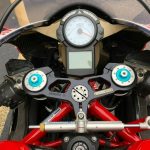 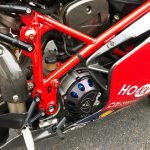 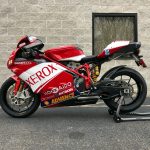 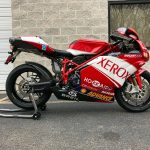 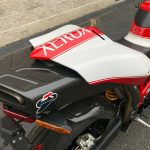 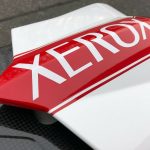 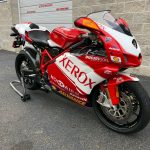 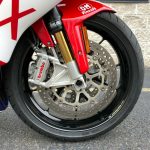 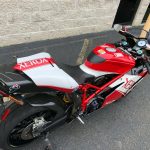 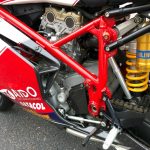 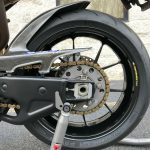