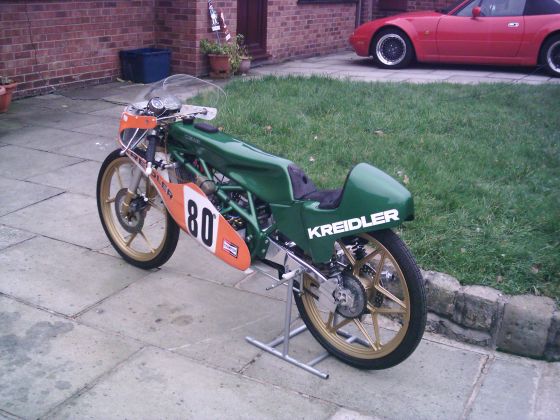 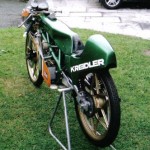 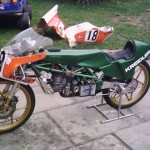 I asked Chris for some more detail and here is his reply:

Yes the old pic is from when the bike was raced as a Rudge in the 80s.

The bike was purchased from Herbert Rittberger (Kreidler team manager/tuner) in 1981. It has the factory short stroke engine which is 36mm. The frame was made by Bakker and the swing arm is alloy. It has a special Dellorto carb and this is angled back to improve the flow into the crank case. This means that the crank is blanked on the disc vale side and the ignition is now on the clutch side of the engine. It has two radiators, one in the nose-cone, and one in front of the engine. It has very few parts in common with the production bike.

After buying the bike in 81 the new owner decided to re paint and re badge the bike as a Rudge as he owned the rights to the name. This was raced with some success in and around Europe, and i have a few magazines and race reports to back this up. The bike is now back in its correct colours and is truly stunning with 22bhp on tap — it goes like a missile!

A very cool looking bike and a nice bit of history. Good luck with the sale Chris,