Update 10.30.2012: This listing was first published in September of 2009 and has reappeared on eBay from what appears to be the same seller. The opening bid is up a bit at $25k but is also listed with a buy-it-now of $37k. Currently no bids with just less than 2 days to go. Thanks to Doug for the original post on this bike! -dc

I posted a 1999 F4 a few days ago that had been upgraded to look like this bike.  As my previous post stated “Oro” means gold in Italian.  All of the gold bits on this F4 Oro are Magnesium with gold finish, thus the badge of Oro.  I think these are pure eye candy and am envious of anyone who owns one of these beauties.  This MV Agusta F4 750 Oro is #286 of 300, located in Miami and is listed for sale on eBay for $22,000 with no reserve or buy it now.  So, it is possible that you could own this for $22,000. 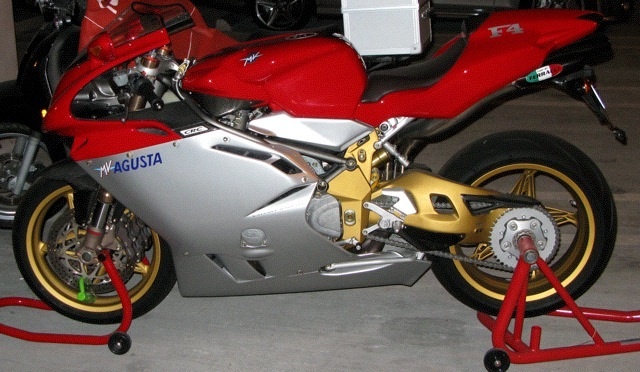 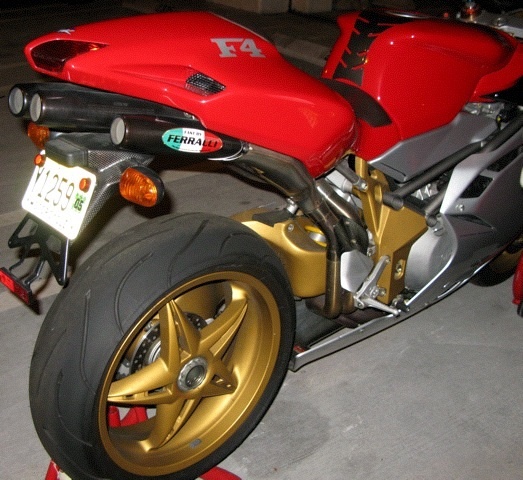 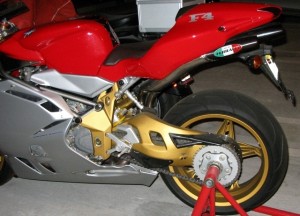 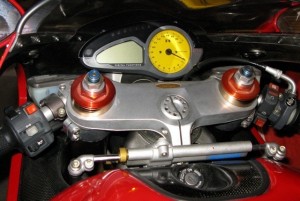 I just had to throw up some large pictures this time so everyone can see the detail, carbon fiber bits and Ohlins components.

This super rare example of MV Agusta’s premiere motorcycle is one of only a hand full that made it to the USA. Most were coveted by celebrities like Jay Leno and Lyle Lovett who were able to get their hands on them. Only 300 were produced in total! It was featured in 2000 at “The Art of the Motorcycle” exhibit at the Guggenheim Museum in NY. Wesley Snipes rode this mode in the movie “The Art of War”. This bike has only 1,200 miles and has never been titled. Comes with Certificate of Origin. Engine: Four Stroke 749cc Inline 4 cylinders 4 valves per cylinder Double overhead camshaft Bore Stroke: 73.8 x43.8 Weber Marelli 1.6M injection carburetors Liquid cooled 6 gears Chain drive transmission Sandcast engine Loads of magnesium parts Brakes: Front – twin disc Rear – disc Weight: 396 lbs. Serviced by Fast by Ferracci IMMACULATE Stand included There is too much to say and no way to express how awesome this bike is in an ad.  Call Earl for the information and stories you could listen to for hours!

I would love to hear the Ferracci exhaust note on this thing, I bet it screams….  Although the owner doesn’t give much information on any modification made to the bike, they do offer their phone # for additional information.  So if you’re interested hit Earl up for some info.