1998 Bimota V-Due 500 Iniezione with California title – and it runs perfect!

UPDATE 2.18.10: After less than 12 hours on our site, this one is already gone to one of our regular readers. Another happy customer at RSBFS! Thanks to Seltzer for the submission and Phil for the post!

Ah – the famous (or rather, infamous) Bimota V Due. It was Bimota’s ambitious move to have an engine that was completely developed in-house: a 500cc 2-stroke with direct fuel injection that would give the V Due the highest power to weight ratio for any production production bike at that time. But when the production units rolled out, they were plagued with many problems which lead to a series of events that ultimately broke Bimota. There’s more HERE and HERE about the V Due if you are interested. 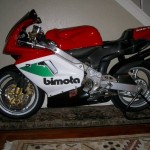 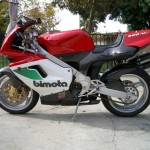 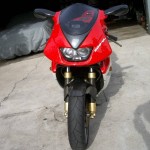 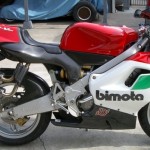 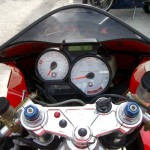 This is your last opportunity.  You will never get a another chance to own one of these! If you are looking at this ad, then you know what this bike is.  It has 6000 miles on it (every one whilst wearing a big ol’ you-know-what eating grin!).  And it has a California Title.  A CALIFORNIA TITLE.

The VDue Story – You probably heard it, but just in case you didn’t. . . Bimota bet the farm on this bike.  The only Bimota built with their own enigne.  A unique 2-stroke with independent computer controlled air, oil, gas, and ignition systems.  It was designed to be the epitome of all things Bimota.  However, due to some bad luck, bad control of vendors, and bad quality control of their own, none of the first generation bikes ran.  None.  Bimoate quickly recalled them all and the owners were sent new bikes. .  . . ones with carburetors instead of electronic ignition.  And so, the Iniezione was quickly laid to rest. . . .

This particular bike – This bike came into my ownership in 2000.  And, through finding the right contacts to help me out and some imaginative engineering of my own. . . it works flawlessly.  I wanted to keep the bike as intended by its developers, so I made as few modifications as I could.  In fact, this bikes still has all of its original parts (even the fuel injectors and computers).  I have posted to various VDue owners groups what I did to get this running so great, and I won’t get into it here.  All you need to know is that it runs.  It is a blast.  It is an Iniezione!  It is probably the only Iniezione in the U.S. (or perhaps the globe) that runs on the original design spec equipment.

Condition: Externally, the bike is in great condition.  And, the engine is in great condition too (I just tore it down for inspection and even the cylinder walls looked new!).  The wheels and suspension are in simialr condition – alomost perfect.  All the alumiinum is in excellent condition with zero corrosion.  Due to poor fit and finish, and also a lot of tear down during my research, the fairings and air box cracked and have been repaired.  You cannot see any flaws from the outside, these components were fixed from the inside out, so you can’t see anything cosmetically wrong.  Also, I periodically clean the exhaust cans, so they show some signs of being opened and re-riveted closed (but not much really).  However, to be fair, I need to mention these issues here.  I will, of course, send complete photos to anyone who requests them.

Well, the seller pretty said it all.  V Due’s are legendary not only for the damage that it caused Bimota, but also for the vision that Bimota had for it had it worked.  If this V Due truly works like it was supposed to as the seller claims, then it is definitely worth the $15,000 asking price.