Hey, remember the ’90s? If you don’t, then this bike will bring you right back to the days of sport bikes not only being judged by their speed and handling, but their outrageous color schemes as well. If you secretly miss the days of brick-sized cell phones, Pulp Fiction, and Ace Of Base ruling the airwaves (okay maybe not that one), then this could be the bike for you! 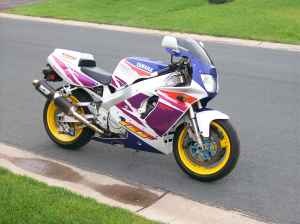 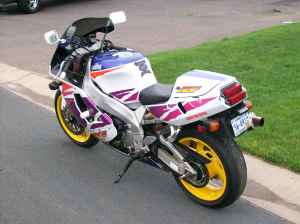 The YZF750R arrived in early 1993 and was based on the OW01, however it shared no common parts with its famous older brother. Though not as rare and collectable (yet), the YZF750R proved itself to be a highly competent and user friendly bike on the street. Present on this model are a six-speed gear box, dual 320mm discs up front with six-piston calipers, and Yamaha’s EXUP system allowing the bike to pull hard through the entire rev range.

The bike for sale here is a clean, one-owner example that has been enjoyed to its potential but seems to be well cared for. A few modifications are added to the bike including, but not limited to, a Vance and Hines slip on, braided brake lines, and EBC Pro-Lite rotors. The seller also states that the bike had one “low speed lay down” resulting in some fairing scratches. Though not perfect, the bike appears to be relatively unmolested and properly maintained. Detailed ad from the seller:

“Here is my 1994 YZF750R that I bought new. Thats right…I’m the only owner and I planned to keep this bike forever. I haven’t riden anything I’ve liked more. I just dont find the time to ride it anymore. I’ve kept it running well and replaced items when needed. Everything works as it should. I have made a few upgrades over the years to enhance performance and track capability. I did a track day at Road America a few years ago and was getting compliments on how fast it was and how well it lapped the track. Back in my racing days I did a few weekends at BIR with it while my primary bike was being rebuilt. I find myself being drawn back to the dirt. Its not perfect and has had one slow speed lay down so the fairing has some scratches, but overall in very good shape.

A few other items of interest:
MSRP of $10,500 back in 1994.
Inverted forks
6 piston calipers
26,000 mile valve adjustment intervals
Genesis 5 valve head
1995 bike of the year for SportRider
1994 bike of the year for Cycle World
Only real contender against the Ducati 916 in those years

I will hate to see it go.

I have extras that can go with the bike if I get the asking price….swingarm stand, Yamaha shop manual, spare plastics/parts, etc.

If you’re a fan of bright-colored graphics, yellow wheels, and a clean example of what mid-nineties sport bikes were all about, then this bike should be right up your alley. This YZF750R will draw compliments from those who are fans as well, but is not so outrageously priced and pristine that one has to be afraid of enjoying what this bike was built to do; go fast. Still interested? Check out the for sale ad for this modern classic.