Collin has given me the heads up that he’s ready to part ways with his 93 NSR250SP. Here are some details: 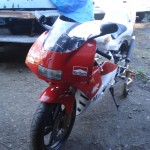 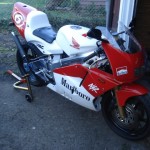 Collin is asking $6500 and he’s in Vancouver, Washington. Interested parties can email him directly.

Good luck with the sale Collin!

Update: Colin has re-listed this bike since last October and has lowered the price to $5500. Here is the new link and some additional pictures and video: (movie of it running/making noise, this isn’t a cold start)

Titled and Plated in WA

According to the subframe numbers, its a ’91 SE. (I bought it thinking 93 SP/SE bike)
12,900kms
Top end was done by Eric Gorr with a mild port, but I’m not sure exactly when in the bike’s history.
It is de-restricted, so it should be around 50-60hp at the back tire just guessing.

Comes with a full set of TYGA spares body work in perfect shape, with a painted matching tank, and a few other parts (spare ignition, etc)

5500 firm, I’m not interested in any trades, unless you’ve got a Ferrari F40 your sick of. I just need more money for racing.