Suzuki’s RGV250Γ shows up on this site from time to time, but it’s been almost a year since we featured that v-twin powered bike’s predecessor, the RG250Γ. Two-strokes were the best way to get both power and light weight out of the same package in the 1980’s and, instead of the later bike’s v-twin, the RG250 was powered by a 54mm x 54mm [247cc] liquid-cooled, two-stroke parallel twin, along with a trick aluminum frame and the usual bunch of 80’s acronyms and catchy names. Produced between 1983-1986, the earlier Gammas had a bit of Yamaha RZ350 not-quite-fully-faired look about them, but by 1985, the RG was starting to look like the whippy little two-stroke repli-racers we all know and love. 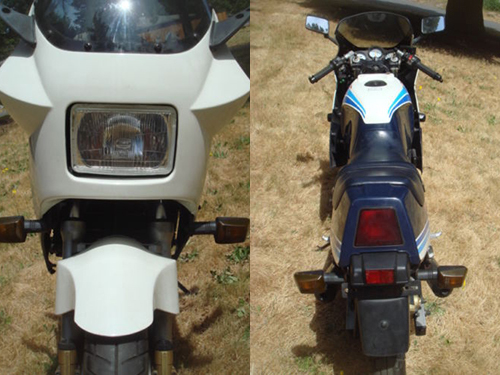 The change to a v-twin was likely made to make a narrower, slipperier bike to maximize the limited power available and to create a smoother bike: parallel twins are compact and less expensive to manufacture, but v-twins tend to vibrate less at higher rpms.

From the original eBay listing: 1986 Suzuki RG250Γ for Sale

Just imported from Japan this summer, this 1986 RG250 comes with a US title ready to be transferred into your name in your state.

This RG-250 is showing just 4262 original miles (6862 kilometers) on the odometer so it is a clean, low mileage bike but the bike was lacking 1 piece of Japan paperwork so it was dismantled and shipped to the United States and then reassembled when it arrived stateside. It’s titled free and clear now in the USA but some final assembly like cables and electrical plug-ins and fluids, etc need to be finished before you can ride it. You can see from the video it’s a running bike and it’s complete and the fairing bodywork is original but maybe the front lower fairings are missing, I don’t know, I’m not that familiar with this model, I can only compare it to my NSR250R bike. The seat is in good condition with only a small 1 inch split along the lower left side. Needs new paint around the brake reservoir but the triple drilled disc brakes and original paint make for nice features on this bike. Tank is straight and there is no crash damage anywhere; the bar ends and levers and pegs and turn signals all look normal but the left fairing attachment by the gas tank is broke (see pics). All in all a clean used RG 250 listed for no reserve. Someone is going to own it – why not you?

I can get great shipping rates (anywhere in California for $300 as an example) so don’t let the cost of shipping keep you from owning this collectible Japanese two-stroke streetbike. This rare two-stroke motorcycle comes with a key and is already street legal titled in the United States in my name and ready to be transferred into your name just like any other vehicle title transfer.

The seller also includes a video of this bike showing running condition before it was shipped to the United States. This certainly isn’t in pristine condition, but looks to be relatively clean and complete, with low miles and a title. Bidding is active, but only up to about $2,700 with three days left on the auction. With a little love, this could be a pretty cool back-road blaster, and one that holds an important place in Suzuki’s history.