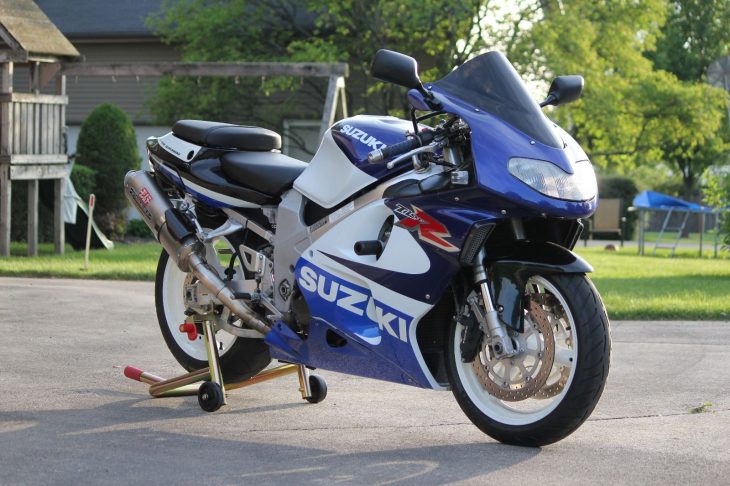 Back in the late 1990’s the motorcycling world was gobsmacked by the Ducati 916 – not only was it shockingly beautiful, it restored the v-twin as THE desired powerplant for the motorcycling cognescenti.  Given the impact of the Ducati 916 it wasn’t a surprise that the competition tried to build their own v-twins with the results including the Aprilia Falco, Honda Firestorm and Suzuki TL series (S/Street and R/Race model). While these bikes were each interesting in their own way (especially the Falco) none dethroned the Ducati.  The reasons for this were varied; the Aprilia was poorly marketed and simply bland looking in comparison while the Honda suffered from a very small fuel tank and poor (for Honda anyway) build quality.  As for the TL series, the issue was handling.

When the Suzuki TL series was introduced with the TL-S/Street version the 90 degree v-twin won raves for producing 125hp.  However the v-twin design meant that there was less room for the rear suspension so Suzuki fit a car-like rotary suspension system which involved a separate spring and rotary damper.  While this suspension is fine under most situations for the street, when the suspension came under heavy load it got hot and the suspension could struggle to respond quickly enough. The result was front wheel lift which could then result in tank slap.   The press jumped on the issue, declaring the bike as a “widow maker”. Even as Suzuki worked to resolve the TL-S/Street versions handling issues the company launched the TL- R/Race version.  Like its year younger sibling, the TL-R had a great engine (tweaked to produce 135hp) that was now mounted in a GSX-R series derived beam frame and clad with full bodywork.   The TL-R came with a factory installed steering damper but despite the changes, still maintained its reputation for dangerous handling.  Sales were below target and after 6 years Suzuki decided to pull the plug on its V-Twin series efforts and refocus its attention on the GSX/inline four series. 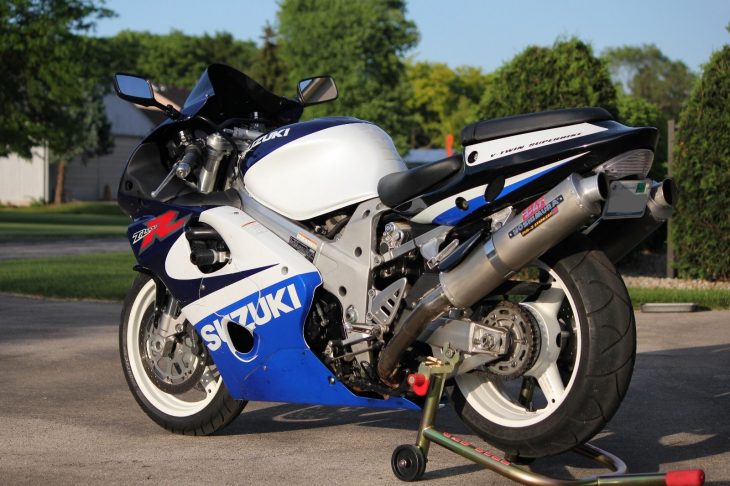 This particular TL1000R is in the traditional late 1990’s blue and white Suzuki colors.  Personally I think it was a mistake for Suzuki to clad the TL-R in something that was so similar to the GSX-R series but the bodywork on this one does look to be pretty good.   The taillights, turnsignals, windscreen and frame sliders/crash bungs are aftermarket but could be restored pretty cheaply.  The seller does indicate some scuffs and a broken bit of fairing but also indicates that the sale includes some extra bits So what is this V-Twin beastie worth?  Obviously its not a pristine bike and will require some attention if the intent is to acquire it for a collection.  However the price right now is stupid low at $2600 USD (which is barely above KBB trade in value) and these still have a reputation for being very good both as a daily commuter and on  the track.   Personally I think this one is a screaming deal right now.

Note: If you are interested in learning more about the TL1000R, check out some of our previous posts regarding the Suzuki TL1000R.